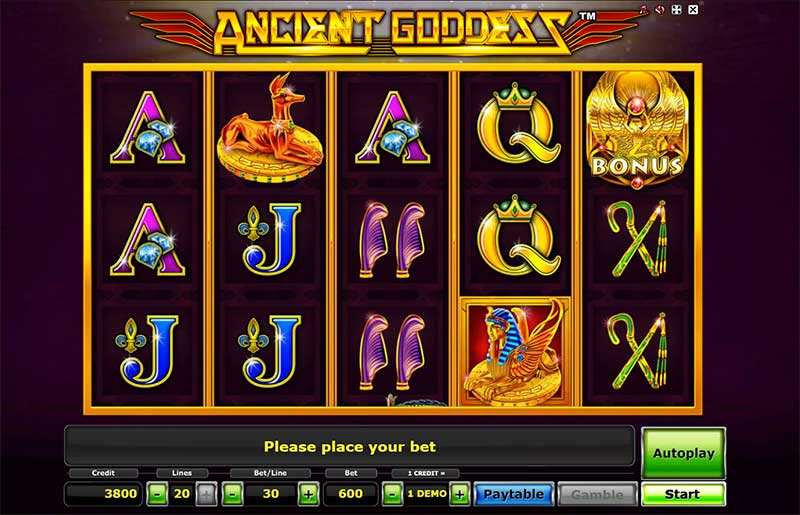 Novoline’s Ancient Goddess slot is all about ancient Egyptian deities and rich treasures waiting to be discovered. Pray to the ancient goddess Isis to be bestowed with her good fortune and receive the lucrative free spins feature. Ancient Goddess is a well-done Egyptian-themed slot that entices with strong features like wild and scatter symbols, as well as exciting symbol upgrades. Players can equally enjoy the good odds of winning at Ancient Goddess online as well as the intricately designed symbols.

Find out here where to play Ancient Goddess for free without registration and get some tips to successfully start your mythological adventure!

Meet a number of Egyptian gods in Ancient Goddess.

Those who are familiar with Egyptian mythology know that there are numerous deities and legends. Ancient Goddess slot deals with them and introduces everyone who is interested in it to the divine world and its treasures. While the design around the reels is kept very simple, Novoline has put all the more effort into creating elaborate, pretty symbols.

Besides the card deck symbols A, K, Q and J as well as a few ancient Egyptian characters, the following main characters spin on the five reels:

The golden bonus symbol and the sphinx are the highest value symbols, paying out up to 100,000 coins when played at the highest possible bet.

If the valuable golden symbols already excite you, you should waste no time and play Ancient Goddess for free or with real money wagering to see the coins trickle into your player account. All that is required to play Ancient Goddess is a bet between 1 and 2,000 coins. Players decide for themselves how many paylines they want to activate. The fact is, the more paylines played, the higher the chances of winning, as winning combinations of at least three of the same symbols must land on an active line to result in a payout.

It can be played with only one payline, but also with up to 20 paylines. A trick to estimate how many paylines and what bet is best is to play Ancient Goddess for free and experiment with it.

Ancient Goddess is not only full of Egyptian deities, but it is also equipped with numerous bonus features that make the player even more exciting. There is a wild symbol and a bonus symbol, both of which take important roles. The goddess Isis represents the wild symbol and can substitute for all others except the bonus symbol, creating even better chances for complete winning combinations. However, the goddess can only be seen on the second, third and fourth reel.

As an added bonus, the wild symbol can expand to reveal the entire image of the goddess and the symbol takes up an entire reel, i.e. three positions.

The bonus symbol, which can also be called the scatter symbol, is represented by a golden statue. When three or more of these symbols appear in Ancient Goddess online, 12 free spins are triggered instantly. The positions on which the symbols land are not important. During the free spins, the wild symbol brings you even more joy, as each of them performs a symbol upgrade. This means that symbols take the form of the next higher one. For example, a scarab beetle becomes Horus, the falcon god, and Anubis, the dog god becomes a sphinx symbol. In addition, 1, 2 or 3 Wild symbols will ensure that 5 more free spins are activated, allowing you to play Ancient Goddess for free for even longer.

If you are looking for an extra kick in the game, you have the option to use the gamble feature after a round win is achieved. This is a risk game that offers a 50:50 chance of winning. Players have to place their previously made bet and bet on the correct card color (red or black). If the tip is correct, the winnings or stake is immediately doubled and you can bet on it again up to five times. However, it should be noted that a wrong tip will immediately result in losing the entire winnings and starting all over again in the main game of Ancient Goddess.

Ancient Goddess by Novoline can convince all along the line with its beneficial bonus features and elaborate symbols. Not only players from Germany will love this online slot, because not only an interesting topic is treated here, but also the chances of winning speak for themselves. Ancient Goddess is therefore suitable for everyone who is looking for a lucrative slot game.

It is worth taking the chance that you can play Ancient Goddess for free, as this way you can build a strategy without the risk of losing your own money. On our site you can play Ancient Goddess and other slot games for free without registration. This gives our German readers the advantage of being able to directly implement all the tips and tricks they have received and get the full entertainment value without registering at an online casino. Also, use this opportunity to get to know the rules better and study the symbol values.

Play Ancient Goddess online at the casino for real money

Ancient Goddess is available online not only in free demo version, but can also be played for real money after registering in an online casino. However, you must be aware that your own deposit is necessary, even if a welcome bonus, such as free spins without deposit, can be taken advantage of beforehand. With such a bonus, you can play the first rounds of Ancient Goddess for free.

If you decide to play Ancient Goddess online for real money even after taking advantage of a bonus offer, a deposit must be made. Therefore, make sure that you play at a reputable and safe online casino. We keep our fingers crossed that the search for the precious golden treasures turns out to be successful!