Blaze of Ra by Push Gaming 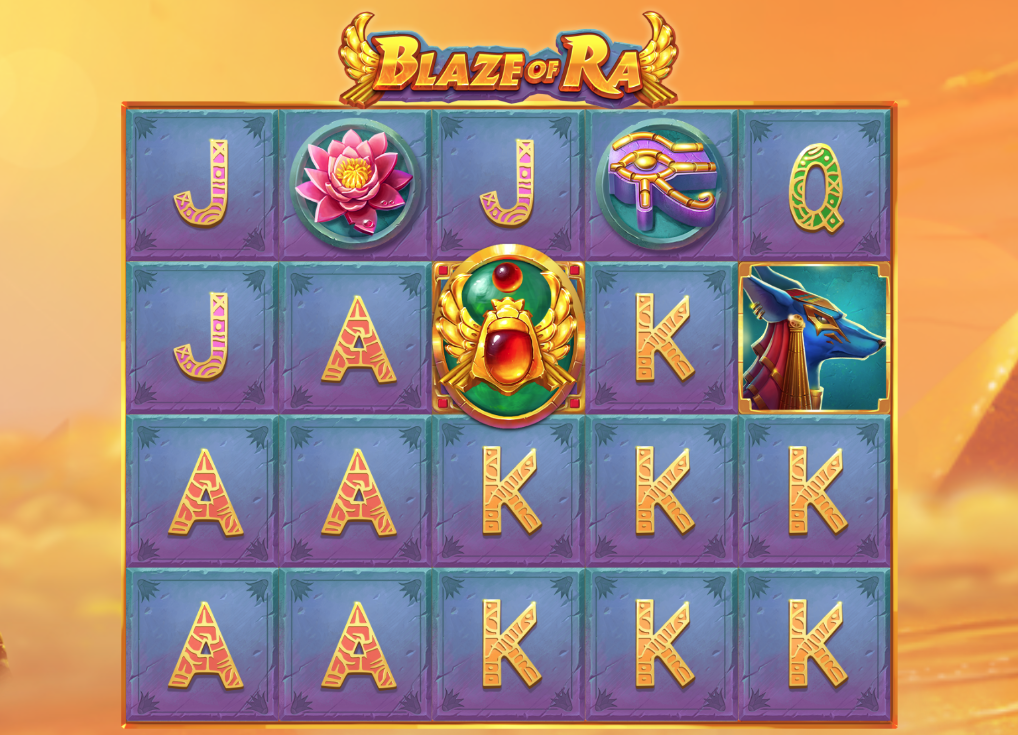 With Blaze of Ra, Push Gaming also has an interesting slot with the popular Egypt theme on offer. The slot game got its name from Ra, the Egyptian sun god, who already plays the main role in many other popular slots. With Anubis and Bastet, several other gods of Egyptian mythology also join the game. Thus, the theme of Blaze of Ra may not be really original and new, but the online slot scores with some interesting and unusual features. These include:

In addition to the symbols already mentioned, which show the motifs of Ra, Anubis and Bastet, there are of course several other motifs. These include:

Player’s bets are always valid for all 40 paylines of Blaze of Ra online in each round. Accordingly, the number of lines cannot be adjusted. Winning combinations apply from the leftmost reel to the right, and at least three of the same symbols must be involved in a win.

Blaze of Ra by Push Gaming: Easy to use despite numerous features

Push Gaming slots are usually very easy to learn and play. Almost every game from Push Gaming has the same and clear control interface. By means of spin button or auto-spin function, the game rounds can be started. With auto-spins, the player can set any limits and conditions. If one of these conditions is met, the up to 100 possible auto-spins end.

Since Blaze of Ra is always played on all 40 paylines, the bets are also always placed on all 40 lines. Players have a choice of twelve possible bets, which can range from 20 cents to 100 euros per spin. Further information such as the paytable or the rules and various options are available via the main menu. Its menu button is located in the lower left corner of the game.

For its slot machines, developer Push Gaming always comes up with interesting features that stand out from the crowd. Blaze of Ra is fortunately no exception to this rule. The slot machine has the following features to offer:

Sounds offensive at first, but it doesn’t have much to do with the word. Rather, they are re-spins as soon as Ra appears as a wild symbol on the reels. Ra practically forms a continuous reel, but rarely fills it completely. If Ra appears on the top two reel positions, it remains on that reel for the next spin, but moves down two positions each subsequent spin.

The scarab also plays an important role in Blaze of Ra as a lucky beetle. Namely, as a scatter, the symbol triggers the bonus, giving the player up to ten free spins. Each scatter can unlock one to two free spins and a minimum of three scatter symbols are required to trigger the bonus. During the free spins, the first, the third and the fifth reels are completely filled with Ra as the wild symbol, which allows for high wins.

Play Blaze of Ra for free without registration

Blaze of Ra online offers rather standard fare thematically with the Egypt theme. However, the slot collects bonus points with its bonus features like the bumping wilds and the free spins with stacked wild reels.

All the mentioned features can of course be tried out in the demo version, which is why it is highly recommended to play Blaze of Ra for free. If you want to play Blaze of Ra for free, you can start the trial version directly on our pages and try it out. With us and in most casinos you don’t need an account for the demo and you can play the slot machine for free without registration.

Play Blaze of Ra with a no deposit casino bonus

After playing Blaze of Ra for free, most players understandably get tingles in their fingers. Since the slot offers a good payout rate (RTP rate) of 96.4 percent, there is also basically nothing against trying your luck with real money. Tips and strategies to increase the chances of winning are hardly available for slot machines. However, it can be worthwhile to increase your gaming budget with the help of the bonuses offered by online casinos. Most Push Gaming slots can also be played with a bonus credit.