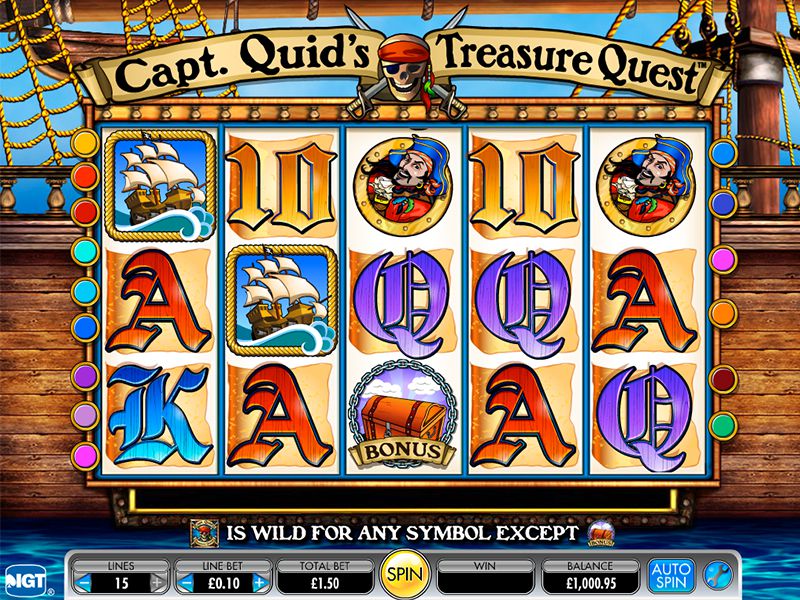 Do you like one-eyed pirates with sabers, treasure chests and sailing ships? Then Captain Quid’s Treasure Quest from the slot game provider IGT will surely come to your display soon when they visit the casinos online. Pirate slots have always been an extremely popular slot game theme and will probably remain so. What this is due to, who knows, in any case, the important thing here is that these online games can bring in fat profits. Dieses Spiel ähnelt dem Cash coaster und Sizzling hot deluxe Spielautomat.

Captain Quid is played on 5 reels and on 15 paylines and offers a lot of other special features.

All the game symbols here have something to do with pirates. The symbol that can pay out up to 50,000 coins if it lands on all 5 reels in a line is the Captain Quid logo. This is also the wild symbol, which casino players will see often. Otherwise, there are the standard symbols of Ace, King, Queen, Jack and the number 10 and a symbol with a photo of the sneaky Captain Quid, a skull, a pirate ship, a compass, several pirates and the bonus symbol, which is a packed treasure chest. This treasure chest is full of surprises in the game and one of them is that it gives players multipliers up to 15x during the free spin rounds.

With one of the most stately jackpots among slot games, Captain Quid’s Treasure Chest is there with a jackpot of 50,000 coins.

Other special features include:

You can grab the pirate treasure in these Captain Quid’s Treasure Quest slot games and twice! Because there are huge winnings waiting for the slot players here and there are hardly any limits upwards. How about a vacation in the Caribbean, financed by Captain Quid? That would be one prize, the other is that the treasure chest is waiting for you. If this lands three times or more on its paylines, you’ll enter the lucrative bonus mode and really get going. It goes to a second screen where each treasure hunter can find free spins, multipliers and still other prizes on the map.

In the “Treasure Quest Hunt” bonus game, you can win up to 20 free spins. In this case, the scatter symbol also pays out much higher winnings.

The limits of the captain

The minimum bet per line in this of all casino slot games is 1.00 and goes up to 500.00. If a more conservative player wants to bet on all 15 paylines, he can do so here without any problems. Up to 200.00 points can be won on each payline, which brings the maximum bet up to 3000.00 per spin. As said, a very profitable slot.

Playing Captain Quid’s Treasure Quest for free at Automatenspielex.com is definitely worth it. It’s like opening a treasure chest that the pirates just took from another ship in the Bermuda Triangle! Other casino slot games can be quite a bit more lucrative, but this actually relatively classic slot offer players a lot of excitement and thrill. The dynamic bonus rounds are a joy to play and the music, where you can hear metal pirate sabers clinking together, for example, is pleasant and soothing during exciting gameplay. Play free Captain Quid’s Treasure Quest casino slot games!