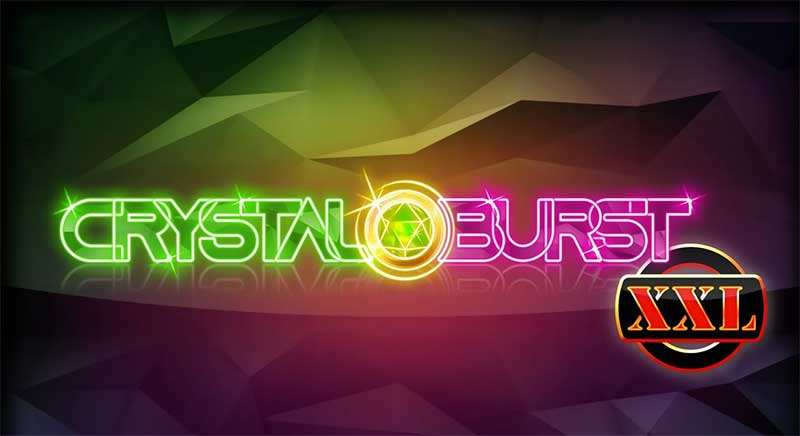 Crystal Burst XXL is a modern answer from Gamomat to similar successful video slots, first and foremost to NetEnts Starburst. The studio did not simply copy the popular slot game, especially in Germany, but also brought in some of its own ideas. In addition, there are the no less crystal clear graphics of the game, fancy animations and the classic and thus pretty cool sound effects. Furthermore, Crystal Burst XXL has an additional row, in direct comparison to its role model, which also explains the “XXL” in the game’s title. Consequently, players play a slot with five reels, four rows and up to 40 paylines. Meanwhile, there are rather few differences in terms of gameplay. Thus, also in this game, the paylines apply both from the left and from the right. Furthermore, the gems set the tone as wild symbols and thus as the main characters in Crystal Burst XXL. Once a crystal gem appears on a reel, it expands to all positions on the reel. In addition to that, the player gets a free re-spin. Apart from the gemstone, the following typical symbols can be found on the reels:

But that would already mention all the symbols of the game. Crystal Burst XXL has no scatter symbols or other characters that could trigger any bonus features. As a result, the player cannot win any free spins either. However, thanks to the great basic features of the slot, this does not detract from the fun of the game.

Regarding the somewhat unusual game rules, players who are more used to “standard slot games” will have to get used to Crystal Burst online a bit. After all, the up to 40 paylines apply equally from left to right and from right to left. Thus, winning combinations can be formed in both directions. However, this is already the only notable difference to classic games. The slot machine can be operated like the majority of other video slots. To start a new game round, all you need to do is click on the flashing spin button and the reels will start spinning. However, a very simple autoplay function gladly takes the effort away from the player. By simple it is meant that the autoplay feature unfortunately does not have any functions such as adjustable win and loss limits or a maximum number of autospins. For this reason, you should continue to keep an eye on the game progress even during autoplay.

Before starting a new round or autospins, the player should of course choose his bet. A few clicks on the corresponding plus and minus buttons are enough for this. In addition to that, players can set the desired number of paylines, which also adjusts the bet accordingly, as it counts per payline. Plus and minus buttons are also used here, which can then be used to set either ten, 20 or all 40 paylines. Winning combinations can thus be formed on up to 40 paylines, which must consist of at least three identical reel motifs. The player can find detailed information about the distribution of the paylines, the possible winnings and the general rules of the game in the main menu. This can be easily accessed by clicking on the icon in the upper menu area of the game. This is where you will ultimately find the prize schedule, the game rules and operating instructions, and some game options such as the Turbo Spins.

The only and thus most important feature of Crystal Burst XXL online are the stacking wild symbols. So, if the gemstone appears on a reel after a spin, the symbol expands to all four positions of the corresponding reel. If a win is already in the pipeline, the player can of course already be happy. However, he also gets another chance, as the game now performs a free re-spin. If the re-spin also results in a win, the game adds the two wins together and adds the total win to the player’s balance.

In principle, thanks to the stacked wilds, winning combinations can always be formed on multiple paylines. The game counts these together as well, of course. All in all, the expanding wild symbols provide plenty of excitement and good winning potential on every single spin, which also explains the popularity of games of this type. If you want to try out the feature first before playing for real money, you should play and try the demo version of Crystal Burst for free.

Almost every slot machine from Gamomat gets a risk game from the developer. Crystal Burst XXL is no exception. Thus, players can use their winnings received, if they like, optionally again in one of the following two risk games.

Of course, the makers of Crystal Burst XXL have kept to one or the other larger role model during the development. However, this is not negative, after all, there is nothing against implementing popular and successful game elements in their own way. In any case, Crystal Burst XXL is a lot of fun and even offers good potential for respectable winnings thanks to the four rows and up to 40 paylines. In addition, there are the exciting risk games, with which possible winnings can be significantly increased with luck. Our recommendation: Simply start the demo and play a few rounds of Crystal Burst for free!

On our pages as well as on the pages of most of our German casinos you can play slot machines for free without registration. Games from Gamomat are of course no exception. So if you like, you can play Crystal Burst for free and put it through its paces first. There are practically no differences to the normal game version for real money. With the exception that the demo version is of course only for play money. This is also the reason why guests do not need an account to play the demo, neither at our casino nor at many other online casinos. Thus, anyone can play Crystal Burst for free and without registration.

All key data of the demo:

Crystal Burst XXL does not offer its fans outstanding, but on balance good winning opportunities. With an ideal winning combination, winnings that can correspond to 1,500 times the bet are possible. In addition, there is the relatively low volatility, which ensures that the game triggers winning combinations relatively regularly. Thus, there are rather rarely long series of so-called empty spins that do not yield any winnings. This, in turn, helps the player as he is less likely to face lean periods that he has to bridge with his balance. On average, the payout ratio (RTP) of this game is 96.16 percent.

Winning odds at a glance:

If you like the demo and want to dare to play for real money, you should not ignore the bonus offers of many casinos. Here there are as a bonus free spins without deposit, high bonus credits for the first deposits and many other benefits. Partly, the offers even give you the chance to play games like Crystal Burst XXL completely free of charge for real money.