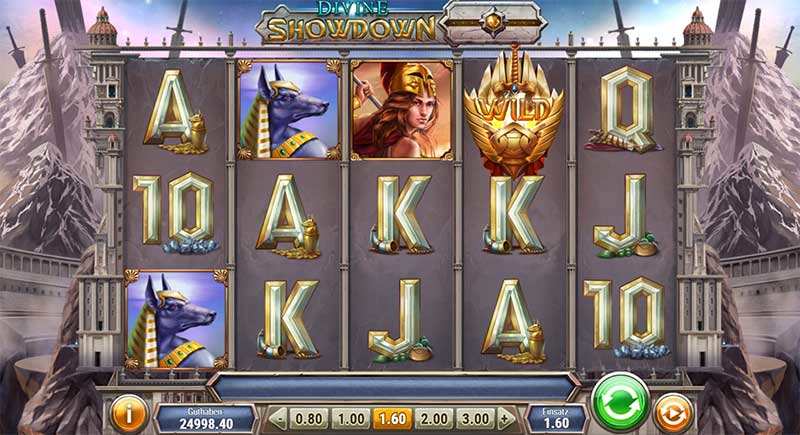 Divine Showdown is a masterpiece from the house of Play’n GO. Players are sent on a journey through the mythology of various legendary deities, where the gods fight epic battles and cause fierce battles. The player gets to see all of this firsthand on five reels, three rows and 20 paylines.

The graphics of Divine Showdown are beautiful and crisp. In the background you can see an ancient city, clouds roam through the picture. On the reels there are the gods and similar symbols that create a suitable mood. Play’n GO has also succeeded with the background music. Classical music that entices you to dream. Pure irony, because it underlines the hot fight of the powerful beings.

The slot machine is generally simple in design and thus ideal for beginners who do not want to operate many setting options. In the following, we describe the slot and inform about the most important facts. After that, everyone can play Divine Showdown for free and try it out. So much is already revealed, with the slot you are catapulted into another world and you forget everything around.

The rules: How to play Divine Showdown by Play’n GO

A very easy slot, for which explanations are actually superfluous. Nevertheless, we wanted to give the beginner a few tips. The first step is to place a bet. Between 0,10€ and 100€ are possible. Simply click on the +/- buttons and select the desired amount. Immediately after that, press the green button and the reels start to rotate.

If you want, you can activate the autoplay button. As a result, the machine will spin up to 100 rounds by itself. The number can be set in the settings menu, and you can also request that the reels stop at a certain situation. For example, when it comes to free spins or the like. Basically, these are already the basic rules. If needed, the sound can be disabled in Divine Showdown online and there is also a speed version. A click on the lightning bolt is enough and the reels spin faster.

The main characters and other symbols in Divine Showdown online

The symbols even have names in this slot game so that you can distinguish them better. There are Thor, Athena, Anubis and Wukong. In addition, card symbols also play a role and form winning combinations as well. If Thor appears five times, the bet is multiplied by 16. Thus, he is the strongest single symbol next to the wild. If the sword, which acts as a wild, appears five times, you can look forward to 20 times the bet.

The wild symbol not only provides high winnings in Divine Showdown slot, but it also acts as a wild and replaces all other symbols except the scatter symbol. Moreover, in the right combination it multiplies the bet by a factor of 5,000.

The scatter symbol, which is represented by a statue with four religious characters, triggers free spins from three characters. Also, the player has to choose one of the primordial creators to enter the battle. Each of the deities in Divine Showdown has special abilities. Before each round, it is determined whether the reel will spin directly or if there will be a showdown beforehand. The god fights one of the other three. They are each equipped with power symbols and these toss the deities back and forth.

More interesting details about the game

The gods have special abilities in Divine Showdown, which we would like to explain in more detail. Depending on how they appear, the reels receive a power and this benefits the player.

A risk game has been waived in Divine Showdown online. This can be tolerated. After all, there is enough action in the game.

Tip: If you want, you can play and test Divine Showdown for free. Let’s go into battle.

Who wouldn’t like to get to know the world of the fighting gods. With us, players can play Divine Showdown for free without registration and apply some tips and tricks. Those who want to develop their own strategy can do it best with us, because here you can play this and other slot machines for free without registration. This is the ideal preparation and if things go positively, you can directly switch to the real money mode at Divine Showdown.

If you don’t feel like playing Divine Showdown online because the gods are not interesting enough, you will find other highlights from the house of Play’n GO. There is a title with a suitable theme for everyone, whether adventure, Christmas slot or bands that rock. You can play and test many of them for free just like Divine Showdown. Surely there is one that will inspire you.

If the time comes when the demo mode without registration becomes too boring, the real money mode is the next step. As an optimal intermediate solution, we recommend free spins without deposit. This allows you to play Divine Showdown for free, but you still enjoy the chance to win real money.

Alternatively, some online casinos offer no deposit bonuses for free or welcome bonuses that add value to your deposit. We present some of them on our website, where we also present numerous recommended online casinos. Important: Every free bonus must be released and is subject to certain conditions. The player must know these so that he can follow the rules.

All casinos with offers for German gamblers that you can find on our site are reputable. We only link providers that have a valid license and promise security. If you are looking for a casino yourself, you should definitely keep this point in mind. After all, everyone wants to know their data is safe and receive their winnings in the end. In Germany itself, there are currently no new licenses for virtual casinos.

Have we convinced you of Divine Showdown? Do you want to follow the gods and inhabit the battles? Pick one of the gambling portals and sign up. Of course, you can also play Divine Showdown for free with us. With so much divine assistance, it’s guaranteed to be magical.