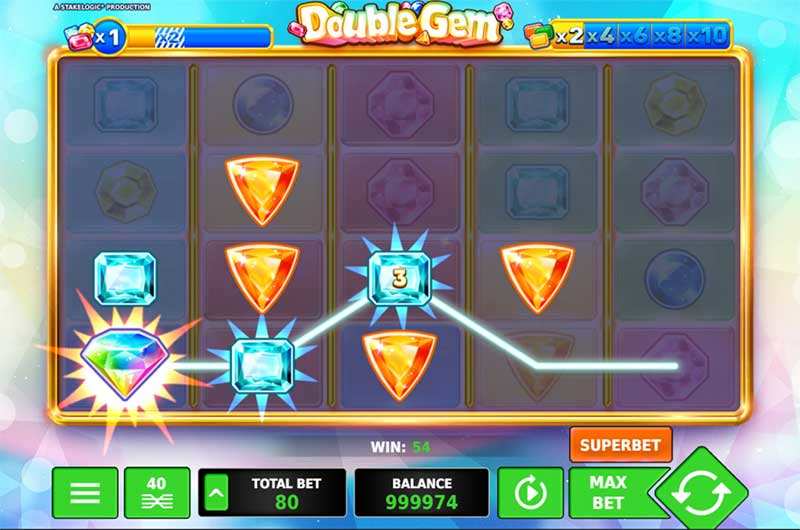 If you like playing slots with precious stones, the Double Gem slot game by Stakelogic is for you. But not only that. Stakelogic has once again gone all out to create a game that is anything but boring or simple minded. Why is that? You might want to play Double Gem for free without registration and see for yourself, then you’ll know right away what we mean. One hint in advance: it has to do with the title of the slot: “Double Gem”. We will talk about this sophistication in more detail later when we explain the rules in the gameplay, pass on tips and tricks or point out possible strategies, if there are any.

In the Double Gem slot, we are dealing with a video slot. As we said, it comes from the game developers Stakelogic. And this name should already be familiar to most of our guests. This is because Stakelogic is one of the largest and most successful game manufacturers, who delight countless online casinos all over Germany and many other countries with their games. We are proud to have the demo version of Double Gem online. This allows you to play Double Gem for free – and by the way, without registering.

But now let’s get to the online game and some numbers. Double Gem appeared in April 2018 in the German casinos and immediately caused a sensation with a well thought-out gameplay. You can win with symbols and also the background of the symbols. Don’t think so? Go ahead. Do it! You can play Double Gem for free and immediately convince yourself that this feature exists. You have nothing to lose. The offer is free and without any obligations. The slot has five reels. Four rows form the visible grid. There are now 40 paylines defined here. Each one starts on the left edge and ends on the right. The paytable shows how high the win is for which winning combination. The theoretical payout probability is 96.04%. The volatility is indicated as low to medium. This promises smaller wins down the line. Again, our offer: Take the chance to play Double Gem for free. The Double Gem online demo version is free of charge.

And these are the main characters here, the symbols that lead to the wins. Here you will also notice that we explicitly include the background colors. The reason will surely be obvious to you when you play Double Gem.

How to play Double Gem online?

You start playing Double Gem by studying the info about the game again. Then you start playing and place a bet. This can be varied generously. Simply use the setting options at the bottom of the screen. You just have to decide: Do you want to play the “Base Game” or the “Superbet Game”? You can find out the difference between the two variants of Double Gem Slot now.

There are two wild symbols – one for each mode. These are the wild symbols in Double Gem online. They replace all other symbols. But beware. The Superbet Wild of Double Gem can only substitute background colors, not gems. And the Base Game Wild can only substitute gems. Please do not misunderstand this. Also important: Wild symbols appear only on reels one, two, four and five. The center always remains without a wild.

While many other slots come up with scatter symbols that trigger free spins, there are no such symbols in Double Gem online. This is what you have to do without.

Above the game board, there are two bars that indicate the multiplier level. If this is too complicated for you, please play Double Gem for free and try it out for yourself.

In the Base game you play only with the left multiplier, in the Superbet game with both multipliers. At the beginning of a game the multiplier is always a minimum: x1 for gems and x2 for backgrounds. When the round ends with a gem win, the gem multiplier increases by one level. The same is true for the backgrounds. If a round follows without a win, you start again at the lowest multiplier.

If we had to describe our impression about Double Gem in one word, it would probably be “fascinating”. You should play Double Gem for free without registration and see for yourself. The symbols are of course rather functional, the sound average. But the gameplay of Double Gem is convincing all along the line. It is fun and entertains the player for many hours.

Those who are looking for variety after all, can take the opportunity and play many other slot machines for free without registration with us. Just browse around for what you would like to try.

How to play Double Gem online for real money

There is only one thing that makes playing Double Gem for free even more enjoyable. We are talking about Double Gem without wagering any money, but playing with bonus. We are happy to explain the idea. If you are considering playing Double Gem with real money, you should secure free spins by means of bonus. This is relatively easy to do. Our lists inform about numerous very good online casinos. Look for one that firstly has the game of your choice in its portfolio and secondly offers free spins without a deposit. For example, in the form of a registration bonus. With these free spins you can now play Double Gem. It doesn’t cost anything. However, you can theoretically win real money. You just have to use the winnings often enough and keep winning every now and then. Details about this are then revealed in the bonus conditions.