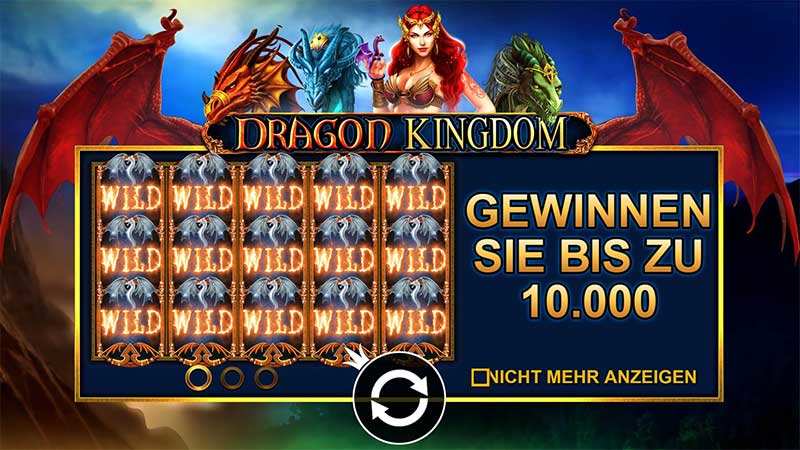 In today’s test, we are dealing with a slot machine that appeals to fantasy fans on the outside, but on closer inspection can also inspire players who have nothing at all to do with fantasy. In Dragon Kingdom from Pragmatic Play you have to deal with dragons in the flesh. Surely you can vaguely imagine how big these beasts are. Precisely because dragons are so huge, you’ll encounter them in stacked form when playing Dragon Kingdom. So, this slot game actually takes you out of your comfort zone in Germany and takes you on an online adventure that doesn’t often happen in casinos.

The dragons of the game can seem a bit scary when several of them land at once. So, if you are one of the more skittish of the German players, our first tip to start with is to play Dragon Kingdom for free without registering. You should also take a look at the bonus features, because the journey to Dragon Kingdom can end with a full account thanks to the multipliers of the free spins. As always, you can find out what else is in store for you when playing and what you need to keep in mind when it comes to the rules in our review.

Dragon Kingdom online at a glance

In order to survive in the land of dragons, you need strong nerves and the right strategy, and you can develop these, for example, if you play Dragon Kingdom for free. It is also possible without registration. In doing so, you can also make friends with the three dragons on your reels, or at least try to do so. Should you succeed in your attempt to become a dragon slayer and land a win in Dragon Kingdom, then you can enjoy some of the best animation in the online casino. In fact, Pragmatic Play has done a true masterpiece with the main characters of Dragon Kingdom slot. This is exactly the case with the sound effects as well. Adventurous and mystical sounds are mixed with the sound of the landing reels when playing Dragon Kingdom. Even the cry of the dragons can be heard loud and clear when one of the winning combinations lands on the five reels and three rows playing field.

In the fabulously beautiful fantasy world that you can see in the background of the game field, there are of course bonus features to discover. If you follow our tip and play Dragon Kingdom for free first, you might already come across one of the features. Therefore, while playing Dragon Kingdom for free, pay attention to the following:

In the base game, with the exception of the scatter symbol, all the motifs are stacked. Thanks to this feature, you can not only get incredible wins in Dragon Kingdom, for example, when four or even all five reels land with the same motif, but also marvel at impressive animations while playing.

If you hit the logo of the slot while playing Dragon Kingdom for free without registration, then you have discovered the wild symbol. It is not without reason one of the main symbols of the game, because it can replace all symbols except for the scatter symbol, thus contributing a not inconsiderable part to a bigger win.

Pragmatic Play has hidden a bonus round of free spins in the fantasy world of Dragon Kingdom, which you won’t find through sinister tricks, but with the scatter symbol represented by a gateway to dragon heaven. So, if three or more scatters land, then as a player you enter this gate and you are directly confronted with a decision. The five main characters of Dragon Kingdom are now presented to you with varying multiplier values. During the free spins, however, only this symbol you have chosen is stacked, all other motifs appear in the usual manner as a single motif on the reels. However, the selected main symbol is not just stacked, but even Super Stacked! The free spins round in Dragon Kingdom online consists of five spins initially, but if three more scatter symbols land, then you get three more free spins. By the way, there is no limit here.

How to play Dragon Kingdom

Another advantage of the Dragon Kingdom free to play option is to get to know the paylines. The slot has a total of 25 of these lines, all of which start on reel one, which is the left reel. So, the winning combinations have to land in this sequence for it to ring in your account. For a win with the low-value motifs, Dragon Kingdom requires three symbols for a winning combination, and with the main characters, two of the same symbols for them.

As for the motifs, you don’t have to worry about things getting confusing in the fantasy world. Dragon Kingdom online has only ten symbols, which are as follows:

Dragon Kingdom is certainly a very special slot machine due to its stacked symbols in the base game. Pragmatic Play has also equipped the slot game with correspondingly large animations, which visibly impressed our testers. However, the game should not be reduced to this alone, because Dragon Kingdom is simply the right overall package. The free spins undoubtedly provide that certain something extra. Because here you have it in your own hands and can choose your multiplier value, which is applied during the spins. In addition, the choice decides which of the main characters will be used as a super stacked motif. So, in this game, you can actually win big, in the base game due to the oversized motifs and during the free spins thanks to the multipliers. The fact that this is not a fantasy dream, but that you actually have very good chances of landing one of these big wins is confirmed by the very good RTP of 96.47%.

Plenty of reasons to get started and play the slot for free without registration, don’t you think?

Take your winnings from Fantasyland and cash them out, how? By registering at an online casino and playing the slot machine with real money. In doing so, you will also benefit from attractive bonus offers such as a deposit bonus or free spins without a deposit.