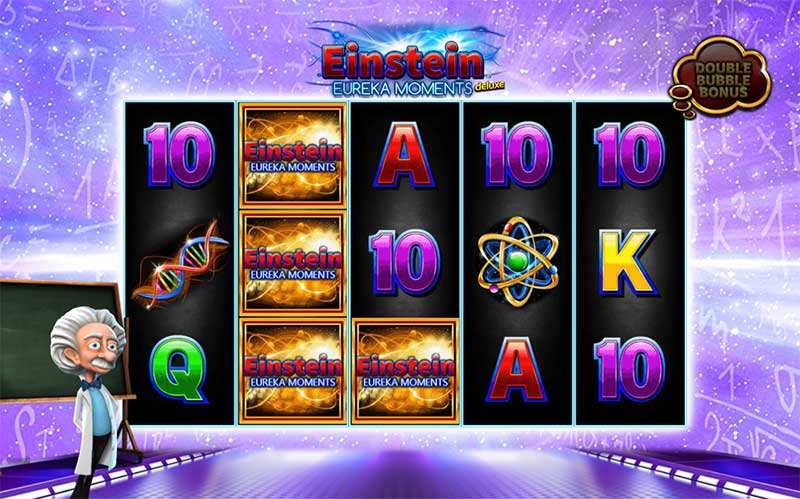 Einstein Eureka Moments by Stakelogic – More than just a slot machine for nerds.

The special atmosphere of Einstein Eureka Moments makes you go back to the most exciting scientific discoveries of the last centuries. If you think about the great inventors, discoverers and researchers, the names Edison, Newton, Darwin, Bell and Einstein, which are well-known in Germany, appear in your mind’s eye. The last of this illustrious group, Albert Einstein, not only lends his name to Stakelogic’s machine, but also guides the player through the game as an animated character. The other four inventors and discoverers, or rather, their names, only appear during the free spins. On our site you can play Einstein Eureka Moments for free and get to know the slot machine in detail.

The little character of Einstein with the typical shaggy hair soon gets bored if not played fast enough. Stakelogic has given the animated character the feature of stomping his feet if he hesitates too long. These small details in combination with the pleasant background music are what makes Einstein Eureka Moments online so special. The slot game is built in the classic way. It is played with five reels and 20 fixed paylines. This results in an average payback rate of 96 percent in combination with the many bonuses that are not only waiting for you during the free spins.

If you want to play Einstein Eureka Moments for free, you will quickly notice that the little animated Albert Einstein has a specific function. As soon as he turns to the board behind him during the normal rounds, it means that he will choose one of the three Reel Bonuses in the next step:

For these bonuses, while you play Einstein Eureka Moments for free, you don’t need any special strategy. Just as with the winning combinations, the probability in the form of the animated Einstein figure decides whether a Reel Bonus will occur or not.

In these bonus rounds, which appear when playing Einstein Eureka Moments in conjunction with free spins, the other explorer and inventor greats from the past suddenly appear. Again, it’s Einstein. Should you play Einstein Eureka Moments, the Einstein figure will decide which bonus will be applied. The prerequisite, of course, is that three Einstein bonus symbols appear first.

Another bonus that the player of Einstein Eureka Moments online decides on his own is the Double Bubble Bonus. If you activate this bonus at Einstein Eureka Moments, you will have to bet 50 percent more. With this bonus, nothing changes in the winning combinations, but with a random Einstein bonus, the genius selects two bonuses at once, which work in the combination in the subsequent round. The role of the scatter symbol in this slot is taken by the Einstein bonus symbol.

In addition, the Einstein Eureka Moments slot offers the possibility to multiply the winnings achieved by using the gamble feature in the form of the card risk. Here, you can try to either guess the suit and double your winnings, or choose one of the four card symbols and quadruple the amount.

Play Einstein Eureka Moments for free without registration and a conclusion about the game.

If you have found the perfect game for you in this slot and would like to put your luck to the test with real stakes, you should choose a provider that offers a small incentive when playing for real money for a registration. Free spins without deposit are a good example of this. With such a bonus, playing in the online casino is even more fun and you approach the matter with more pleasure and serenity. The small thank you at the start in the form of free spins, is ideal to approach the matter concentrated and full of gaming joy.