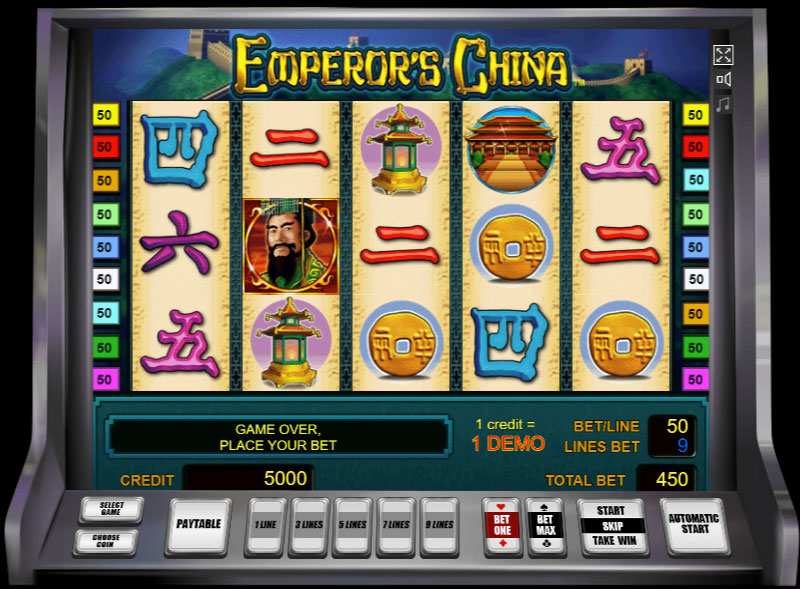 Hello dear friends who are self-confessed fans of casino games of all kinds. In particular, fans of good slot machines. If you also like the theme of mythology, history or rulers, you’re in the right place for our game presentation. This time we want to introduce you to the slot game Emperor’s China by Novoline. For the sake of simplicity, we assume that you know Novoline. If not, we may give a subtle hint. Novoline is one of the biggest casino games manufacturers around. Based in Central Europe, this is also an industry giant that enjoys the highest reputation. The most important innovation in recent years: you now know Novoline under the new brand Green Tube.

Our experts, who are passionate players, have taken a close look for you and compiled all the facts about the game, as well as any rules, tips and tricks, and also chat out of the sewing box when it comes to finding a strategy that leads to wins. To give you a fair and free chance to try out what you read here right away, you can play Emperor’s China for free without registration – right here with us. We have the free demo version that works without any restrictions and without registration. Get to know Emperor’s China in peace and don’t jump into the fray for real money until you feel suitably confident and prepared.

But now to the most important facts. Because the Emperor’s China slot has a lot to offer. It was released in mid-August 2016, so it is now around 4 years old and is quite sought after in various online casinos in Germany. The theme is literally all about Chinese history, rulers, riches and temples. These symbols are distributed on 5 reels. 3 rows form the visible grid. Up to 9 paylines span across the grid. The RTP is around 96%. This is a pretty average value for a video slot like Emperor’s China online. At the risk of repeating ourselves, you should play Emperor’s China for free and try everything right away. You will not regret it.

These are the main characters you will find on the reels. We rank them in descending order of their value:

We count a total of 13 different symbols. Now if you are wondering why we added a small “+” to some symbols: This is to mark those where already 2 symbols along a payline create a winning combination and are enough for a win. For all other symbols, you need at least 3 of the same symbols. This already speaks in favor of Emperor’s China.

How to play Emperor’s China online?

As soon as the Emperor’s China slot is loaded, you can start playing. First you set the bet per game round. This is between 500 and 10,000 coins. You also determine the value of the coins. However, please pay attention to your financial ideas. Now you can choose the number of paylines you want to play with. You can play a maximum of 9 paylines in Emperor’s China. A click on the paytable reveals all the details about the odds. By the way, you should do the same if you play Emperor’s China for free. You are doing that by now, aren’t you? And now you spin the reels. Either by pressing the spin button with your mouse, or by using the autospin mode. Note: Autoplay skips the gamble feature in case of a win. You should take this into account when making your choice. You will learn more about what this is all about below.

When playing Emperor’s China, look out for the Chinese emperor. This is the so-called wild symbol, that is, the symbol that substitutes for every other symbol except the scatter symbol. And not only that. Any winning combination that includes the wild symbol will give you a doubled win. So you win in two ways at once. This will entice you even if you play Emperor’s China for free.

The scatter symbol in Emperor’s China is the flag. Here, too, you benefit twice. First, there is an instant win if you see at least 2 flags – no matter where. And secondly, as well as you see at least 3 of these symbols, there are 15 free spins. And within these free spins you again have the chance to win more free spins on top of that. By the way, Emperor’s China online has a surprise in store: all winnings from these free spins are multiplied by a multiplier of x3.

The Emperor’s China Gamble Feature can be accessed after any win. Just click on “Gamble” instead of “Collect” and a new screen will load in Emperor’s China online. Here you will see a face down card in the center. You should predict whether the face shows a red card or a black card. If you guess correctly, your bet will be doubled, if you are wrong, you will lose it. You can gamble several times in a row. One wrong answer is enough, and the thrill of Emperor’s China online is over again. It continues with the “normal” game at Emperor’s China.

One has the impression that Emperor’s China joins the ranks of those online slots that belong to Egyptian antiquity. Book of Ra, for example, to name one of the most famous of its kind. And indeed, there are obvious parallels. You should have taken the opportunity by now. If not, you still do. We mean Emperor’s China play for free without registration. Make up your own mind about what is offered here. The presentation is good, the sound is what you would expect. The symbols are similar. It should be noted, however, that the higher-quality ones are easily distinguishable, while it takes a while for the eye to get used to the characters in Emperor’s China. Otherwise, there is little to find fault with. Emperor’s China is absolutely successful and fun. You will certainly enjoy it as well.

If you like, you can also play many other slot machines for free without registration. Just click through our offer. There is something for every taste.

How to play Emperor’s China online for real money

Finally, we have a recommendation, an insider tip, if you will, for you. If you want to play Emperor’s China for free, but at the same time have the chance to win money in a German online casino, you should look for a bonus: Free spins without deposit is what you should be looking for. This way you can play Emperor’s China for free but actually win real money with a little luck. Our lists will help you find the ideal portal that offers this bonus.