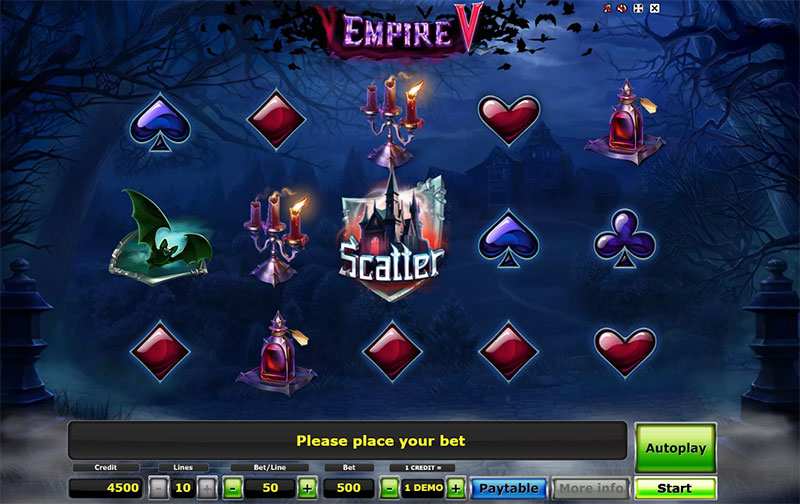 Are you ready to enter the kingdom of vampires? This imaginative slot from Novoline invites players to the very place where the full moon and fabulous creatures meet. The design of Empire V Slot sends a cold shiver down your spine, but can immediately convince all fantasy fans. Coupled with animated symbols and bonus features like wild symbols and Empire V free spins, the slot has a lot of entertainment to offer. It’s worth playing Empire V for free to get in on the full vampire fun, or playing for real money at the online casino for the chance to win some real money.

Learn everything you need to know about the rules of Empire V here, and find out where to play Empire V for free without registration!

An old vampire castle, located in the deep forest and attracting eerie creatures such as bats and werewolves in the night and fog, appearing in the dim light of the full moon, decorates Empire V slot and represents the home of the vampires appearing on the reels. The mysterious background melody creates great suspense when playing Empire V and suggests spooky happenings. These actually occur in the form of cleverly animated symbols that make it seem as if the vampires are flying through the screen.

Novoline has gone all out with this slot game, especially when it comes to design. The eerie main characters on the reels include vampires and vampire ladies, werewolves, bats, three-armed candlesticks, blood-filled vials, a full moon and the vampire castle. This series of symbols is extended by typical card deck symbols that show diamonds, hearts, spades and clubs.

How to play Empire V online

In order to play Empire V online, a few settings are required first. First and foremost, you should ask yourself whether you want to play Empire V for free or with the use of real money. There is both a free demo version and a real money slot machine. Based on this decision, a strategy can be made regarding the bet, which can range from 10 to 2,000 coins.

There are 10 fixed paylines distributed on the 5 reels and 3 symbol rows of Empire V, which offer all players the same chances of winning. However, it should be known that the potential payouts for winning combinations of the various symbols are adjusted to the amount of the bet and are correspondingly higher if the bet is also high. At maximum bet, the following maximum wins can be achieved:

The vampire and the full moon symbol are the only two that already pay out on a winning combination consisting of two symbols. All others must appear at least three times on the reels of Empire V.

Novoline has added extra excitement to the game with a wild and a scatter symbol, as both symbols have special properties that lead to increased chances of winning. The full moon is the wild symbol, which can already be seen from the wild lettering. This symbol can substitute for other symbols to complete or expand winning combinations in Empire V game. The only symbol that cannot be substituted is, as usual, the scatter symbol.

With the help of the scatter symbol, which appears in the form of a vampire castle, free spins can be triggered, giving you the opportunity to play a few rounds of Empire V for free. For this to happen, at least three of the eerie vampire castles must land on the reels, and the positions don’t matter at all. If this occurs, 10 free spins are immediately triggered, during which no low-paying card deck symbols will appear on the reels, so the possible winnings can be higher.

If you ask us for tips on exciting and outstandingly successful slot machines, we would immediately recommend Empire V by Novoline. The fantasy theme of the slot game is very well received by German players and has been excellently implemented throughout the game. There is no component missing from Empire V that makes for an eerie, spooky vampire game. The first-class presentation of the game is rounded off with good winning opportunities and the bonus of free spins and a wild symbol.

Without registration, players from Germany can play Empire V for free. You get this opportunity right here on our website, where you also get the chance to play other slot games for free without registration besides Empire V. This option not only allows for free fun and entertainment, but also gives you the opportunity to learn the tricks of Empire V and possibly come up with a strategy in case you decide to play for real money later on.

Play Empire V online at the casino for real money

Games of chance are particularly attractive when there is the possibility of winning real money. In order to get this opportunity, however, money must first be wagered from your own pocket. Fortunately, nowadays you don’t have to go to a land-based casino for this, but can simply use one of the many online casinos available.

When looking for one of the best online casinos, players will come across many unbeatable offers that entice with welcome bonuses and similar offers, such as free spins without deposit. Our tip is to pay special attention to free spins, because they allow you to play Empire V for free, while having a direct chance to get real money winnings. This way, the first deposit can be a bit of a wait and additionally, the online casino can be tested first before deciding to continue playing there.

So, if you have already decided to try Empire V online, take advantage of our free demo version or look out for free spins for the game at a reputable and safe online casino!