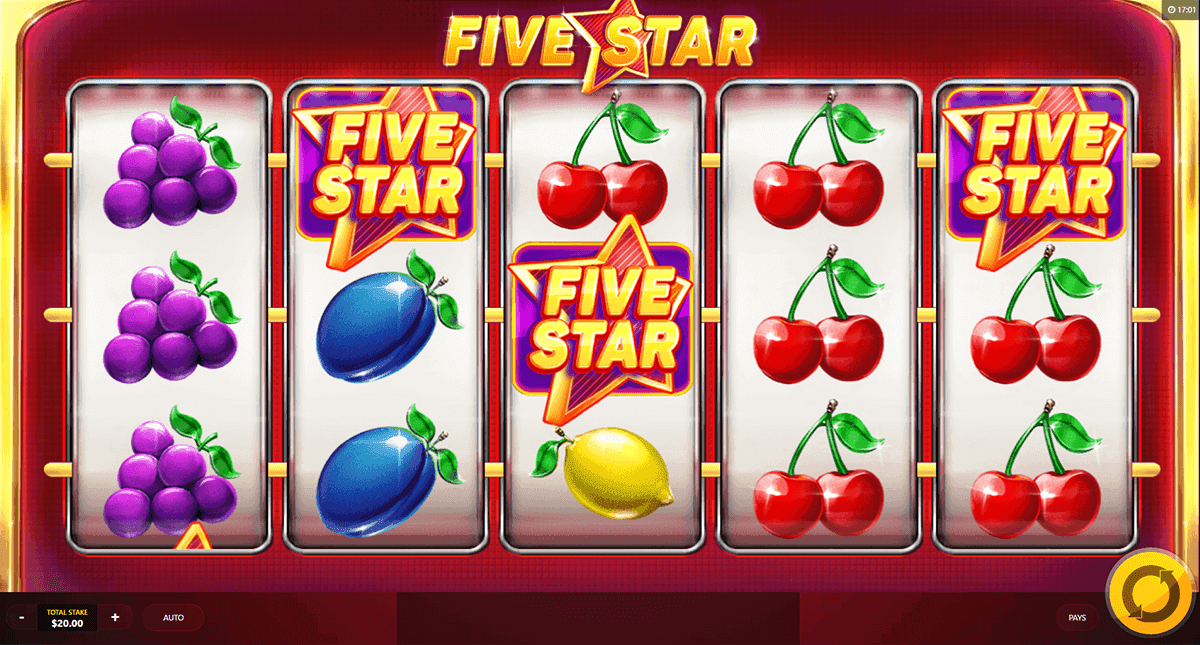 As we all know, a slot machine with fruits is usually well received. However, there must also be a little bit of playfulness and originality. The latter is certainly the case with the Five Star slot from Red Tiger Gaming, because although it is a slot game with 5 reels and three rows each, the slot manages with only 3 paylines. Sounds unusual, but it is: for this, the provider has saved on winning symbols to significantly increase the chance of winning after a spin.

In addition, there may be one or more repeats of a winning spin, free of charge of course. And by repeat is not meant a respin, but a 1:1 copy of the previous spin. A modified form of a multiplier, but a very original one. We have taken a closer look at the Five Star slot from Red Tiger, reveal everything about the rules and explain how you can play Five Star for free.

How to play Five Star online

As already mentioned, Five Star is a slot with 5 reels and three symbols per reel. Winning combinations are counted classically, from left to right, with identical symbols on adjacent reels along the paylines forming a combination. The three paylines are easy to remember: In each case, the horizontal lines from left to right are counted. To determine the total amount of the win, the multipliers per winning symbol are crucial. The paytable should actually help with this, but due to the fact that there are 3 paylines and the multipliers are multiplied by the line bet, there are sometimes hardly comprehensible rounding errors. Therefore, the numbers given here are only approximate values for orientation:

However, the highest paying symbol is the “Five Star”. If this appears three times, the win is 30 times, with 4 stars it is 100 times and with 5 stars it is 500 times. It does not matter at which position the symbols appear. Thus, the “Five Star” basically works like a scatter symbol.

The most important feature of this online slot is called “Repeat Spin”. After every winning combination, there is a chance that the reels will spin again and stop with the same symbol constellation. This process can also be repeated several times. Thus, the Five Star Slot by Red Tiger realizes a win multiplier. However, there are no other features like free spins or a wild symbol in this very simply designed slot machine.

Excitement and thrill can’t really come up in a demo version where play money is involved. So if you have internalized all the rules and maybe even developed your own strategy, then it’s time to play for real money. Use the best online casinos that we have tested especially for you. There are numerous bonus offers from which new customers can benefit. A casino bonus without deposit is also included. Take a look at the offers at your leisure and use the chance to play the Five Star online slot from Red Tiger in a tested casino.