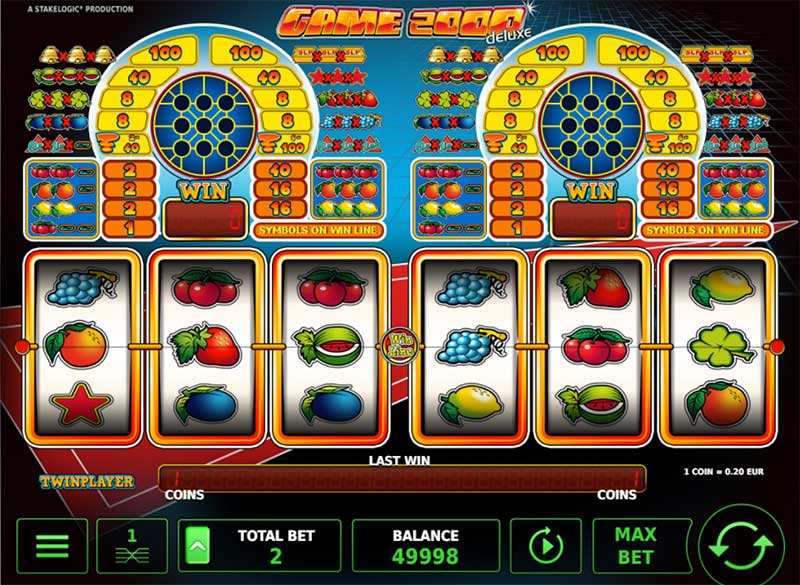 Game 2000 Deluxe from 2017 is one of the first games from the Dutch manufacturer Stakelogic. Here you can already see the design philosophy, which is primarily designed for simple games. When you play Game 2000 Deluxe for free without registration thanks to the German demo version, you will be greeted by a slot machine with a retro look. A casino and a bar are also hinted at in the background, but more on Game 2000 Deluxe’s design later. If you want to make your own first impression, you can test Game 2000 Deluxe online and for free in the demo version.

As mentioned above, this slot game is kept simple, so there are no overcomplicated rules or additional games, but everything is designed to enjoy the excitement of the game. If you want to play Game 2000 Deluxe for free, you can easily do so online with a demo version.

When playing Game 2000 Deluxe, the atmosphere of a casino quickly comes up. At the same time, everything feels relatively high-end and classy, after all, it is the “Deluxe” version. But whether this is enough to keep up the excitement and whether boredom arises, we will clarify in the following review.

The Game 2000 Deluxe Slot consists of a total of six reels with three rows each. The reels are divided into two machines, which you can play simultaneously. You can decide for yourself under “Total Bet” whether you want to play only on the left, the right or on both machines. If you play on both machines, your bet will be doubled. Game 2000 Deluxe has only one payline, the middle row of the reels. It is only counted from left to right. This of course limits the number of winning combinations. If you want to see for yourself, you can play Game 2000 Deluxe for free.

Sound and design of Game 2000 Deluxe

As was mentioned above, Game 2000 Deluxe slot by Stakelogic has a retro style that reminds you of old slot machines. However, in doing so, the game can quickly become confusing as a lot is displayed on the machine itself. If you feel a bit lost as well, you can always go to the information menu, here you will be told how to play Game 2000 Deluxe. Due to the simplicity of Game 2000 Deluxe, we cannot give you any special tips or tricks.

Unfortunately, we can’t tell you much about the sound, because Game 2000 Deluxe hardly offers any sounds. There is no background music and the only sounds you will otherwise hear when playing Game 2000 Deluxe online are beeps when you start the machines and stop the reels. Of course, the wins are also accompanied by a sound, but this one is very generic and hardly adds anything to the whole soundscape. However, if you still feel disturbed by the sounds when you play Game 2000 Deluxe for free or even for real money, then you can turn the sounds off under “Options”.

Sie können Game 2000 Deluxe kostenlos spielen  ohne Anmeldung und das in Deutschland mit einer Demoversion ausprobieren. Unlike other computer games, you don’t need any special strategy or the like in this slot machine game, you have to rely on chance and your luck here. Of course, Game 2000 Deluxe also offers you a few special rules, but in general the game is kept simple, which is why we can’t give you any tips. However, you can opt for a certain bet and or the number of active slots.

The symbols in Game 2000 Deluxe

In Game 2000 Deluxe there are a total of three main symbols. These must appear at least twice in the middle row. The exception is the cherry, which only has to appear once. In the following list, the characters are ordered by the possible wins, starting with the lowest value:

In addition, there are a total of eight scatter symbols in Game 2000 Deluxe by Stakelogic, while the wild symbol has been completely omitted. In doing so, you have to get three of these symbols somewhere within a slot. In the following list, the symbols are sorted in ascending order according to the possible wins:

In addition, there is another additional symbol in this slot machine, the “Mystery Club Symbol”, should you get two or three of these symbols anywhere in a machine, where the first symbol must land in the middle of the left row, you will receive a so-called “Mystery Price”. Here, the counting is also from left to right. The “Mystery Price” is a large number of credits. Unfortunately, there is no possibility to get free spins or free spins in Game 2000 Deluxe. If you are interested and want to get a feel for the game, you can play Game 2000 Deluxe for free.

Winning possibilities in the slot machine

In the free version of this slot from Stakelogic, you have the possibility to bet between 0.20€ and 50€ or 100€, depending on how many machines are active, since if there are two machines, the bet is doubled. Winnings are dependent on the provider and the currency in which is played.

If you are looking for a retro slot machine game, then you should play Game 2000 Deluxe for free. Without complicated special rules or additional games, you can sit back and enjoy a game here. If you are interested, then we have compiled the best ways to play Game 2000 Deluxe for free without registration here. Enjoy the feeling as if you were in a noble casino by playing the slots available there for free without registration with us.

If you like Game 2000 Deluxe online, but the free version just doesn’t offer you enough excitement or you want to challenge your luck, then you should play it once in a real casino or an online casino. So that you don’t get shocked by the overwhelming choice of casinos, we have compiled the best ways to play Game 2000 Deluxe online. In this selection you will also find a wide variety of bonuses, including welcome packages for newcomers, perhaps including free spins without a deposit. With such a bonus, you can get started right away.