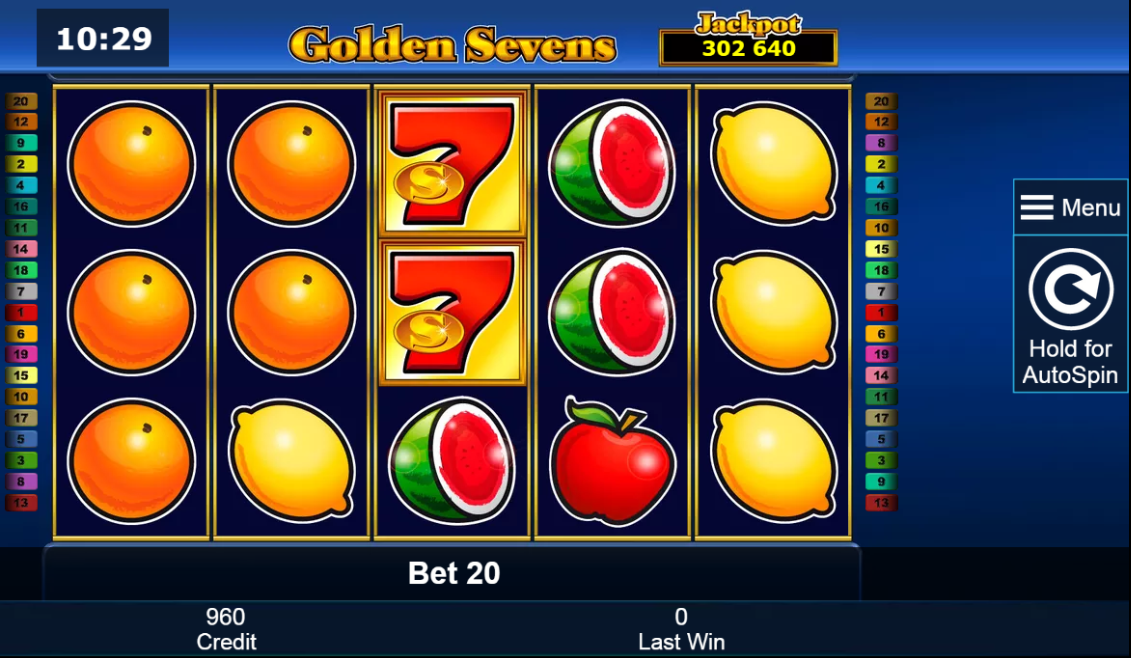 Golden Sevens from Novoline is one of the highly interesting slots from the prominent Austrian developer. Certainly, the slot seems unspectacular, but at the latest after the first win has been paid out, a completely different picture emerges. Because this slot is not a normal online slot, because in this game it is possible to clear a progressive jackpot, which takes the breath away from every player. But everything in order!

Players can play Golden Sevens for free without registration to first take a closer look at the slot and point out its strengths and weaknesses. The free game is especially optimal to familiarize yourself with the gameplay. If you want to play Golden Sevens for real money, you can do so in one of the trustworthy online casinos.

| At the moment, the popular Novoline games are no longer playable in the real money version for German players, as the provider withdrew from the German gambling market on December 31, 2017. Even though there are rumors about a return, this is not concrete. However, there are definitely recommendable alternatives or opportunities to play Golden Sevens for free. |The game is one of the well-known fruit slots and is therefore a classic. Graphically, the slot game is reminiscent of Sizzling Hot from Novoline, although Golden Sevens has far more paylines.

Golden Sevens: The rules and the gameplay

As already mentioned, this video slot is a classic fruit slot. Thus, it is clear which winning symbols show up on the reels:

The slot itself consists of five reels with three rows each and 20 flexible paylines. To start a spin, a bet of at least 0.10 euros is required, which can be increased up to 100 euros.

If at least three identical symbols show up on an active payline, then we talk about winning combinations and there is a win, provided that the symbols appear starting from the left to the right without interruption. The most coveted symbol is the red 7, because if 15 of them appear at once, the jackpot is paid out and thus this symbol can be called the main character. In addition to the jackpot, there are also Mega Games. Otherwise, this main symbol pays out 1000 times as long as it completely fills a payline.

The second highest symbol is the golden bell and it pays out up to 200 times the line bet. Then the apple and the melon follow with up to 100x and the rest of the fruits pay out up to 80x the line bet. It should also be noted that the cherries are the only symbol that already pays out a win when they show up just twice on the payline. There are no special tricks on how it is possible to get a win here, because after all, every slot machine is a game of chance. However, the players who play Golden Sevens for free, who know what special features they need to pay special attention to.

Special features and functions of the Novoline slot

Apart from the jackpot, there are other ways to play this slot for a profit, so that the player’s account can grow respectably. This is the gamble feature, the risk function. As the name suggests, this feature is more interesting for the brave and risky players. After every win that is made, it is possible to use this option, where two buttons can be seen for a few seconds. It is up to the player to decide whether to use the feature or not.

It should be noted that the chance to win in this game is 50 percent. If the player is right here, then the previously won amount is doubled. However, one wrong tip and the previously earned winnings are lost. Therefore, it is recommended to use this feature only in case of low winnings.

The developers have left Golden Sevens practically “virgin”, as there are no wild symbols or scatter symbols at all. Other bonus symbols are also absent here. Whether this decision of the developers is understandable or not is something that everyone has to decide for themselves, but according to our experience, it is possible to achieve respectable winnings even without all these bonus and special features, let alone hitting a jackpot. However, since the latter does not come up every day, the player has to rely more on the two main symbols – the seven and the bell – to be able to take home higher winnings.

As for the free spins, there are divided opinions here. Some say there are none, others say yes. Basically, it is true that there are free spins in Golden Sevens, but they are quite unusual and to be honest, they are the secret cash cow of the slot. If you take a look at the paytable, you will notice that some payouts are followed by the abbreviation “MG” and others by “SG”. What these abbreviations stand for is known only to the developer himself, but what we do know is that they trigger a wheel of fortune. Because for each “MG” there is a spin on this wheel, on which there are 16 squares. Three are “studs”, one field gives out more spins, and 12 fields pay out winnings. There are definitely lucrative winnings here and that’s completely independent of the bet. Sure, this is a bit strange, but can be used wonderfully to get more winnings.

Incidentally, there is a paradox here, because for those who bet less, the spins on the wheel of fortune are more worthwhile than for those who risk high stakes. Thus, the right mix is crucial. The tendency is to bet more on the lower stakes, even if there are fewer “MGs” or “SGs”.

How it is possible to win at Golden Sevens

The game is one of the absolute classics in Novoline online casinos and even in times of modern 3D video slots, many players like to set the reels in motion on this classic. This is certainly not only due to the progressive jackpot, which is often very high, but rather to the game structure. The rules of the game are simple and so even a player who is just making his first experience in the online gambling market can play the slot. Unfortunately, there are no tricks or a strategy to play Golden Sevens successfully. But on the other hand, as a player in an Internet casino, you can often benefit from first-class bonus offers as soon as you make your first account top-up. This is extra money that no one should miss out on.

One of our tips, however, is to familiarize yourself with the most important basic rules before playing for real money, because this way it is quite possible to increase your chances of winning. This also applies to this slot, even though there are no cumbersome bonus games or special features here. It does not take long and so there are no unnecessary mistakes that can be accompanied by losses. Just play Golden Sevens for free and you’re all set.

Surely, there are a lot of other Novoline games that are more modern in design and have integrated bonus games and other special features and symbols, making them far more versatile than this slot. But despite all that, the classic is worthwhile and not only because of the progressive jackpot that can be hit from time to time. The rock-solid structure of the game makes the slot especially suitable for beginners, for whom bonus rounds and other special features in slot machines are often too cumbersome. Certainly, Golden Sevens is not too complex, but for that the slot game proves to be profitable. Players can get a first impression by playing for free without registration, completely without their own financial risk. This way, everyone can get an impression of what this slot has in common with other classics and what has made Novoline games so famous and popular.

Players who focus on online gambling have an advantage over players in traditional gambling houses and casinos: they can play slots for free without registration. Here, the player goes to the start with virtual money and thus gets the opportunity to test the slot in depth and familiarize himself with the winning possibilities. Thus, playing Golden Sevens online for free is perfect to prepare for playing for real money. The special thing about the free game is that the “money” never runs out, because once it is used up, the demo game is simply reloaded and you can continue.

Playing Golden Sevens for free might well awaken old memories in some users, because the presentation of the game is strongly reminiscent of the classic slot games.

Certainly, a slot has certain charms when played for free with play money. But real excitement and thrill only comes when real money is used. After all, the player can never be sure what the next spin will bring: a small win or a big win with numerous MG rounds.

As a new customer, you can benefit from an attractive welcome bonus, through which the first deposit is usually doubled up to a certain amount. An online casino bonus without deposit is particularly interesting, because here you play with real money, but the player does not take any own financial risk.