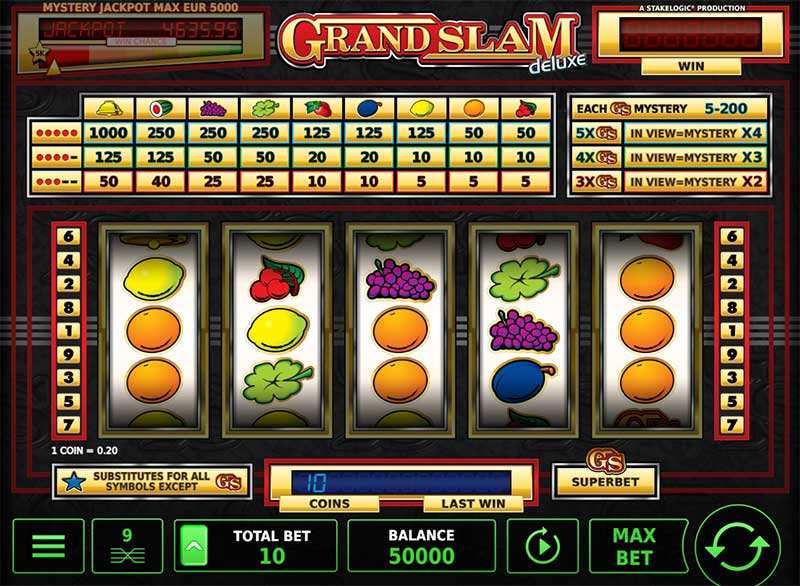 If one casino game manufacturer is known for fruit slots, it is Stakelogic. It would seem that the programmers have taken a liking to releasing as many offshoots of fruit slots as possible in Germany’s online casinos. With the aim of combining every imaginable feature with this theme. And so it is our pleasure to present at this point the slot game Grand Slam Deluxe by Stakelogic.

The online game Grand Slam Deluxe belongs to the category of video slots. This means that the player can look forward to many stacked symbols and even more paylines. In addition, there are usually features like a wild symbol, a scatter symbol, free spins or bonus games or, as in this case, a progressive jackpot that is paid out regularly. If you like, you can get to know the slot free of constraint by playing Grand Slam Deluxe for free without registration. We have provided the demo version for you. Try it out. It’s free of charge and works without registration or any other obligations.

Stakelogic often convinces with the variable gameplay in its games. Be it through particularly creative winning combinations, interesting features or symbols that can have multiple functions. In the Grand Slam Deluxe slot, there is a bit of everything. And what the Germans particularly like are progressive jackpots. We will go into more detail about this one later. When you play Grand Slam Deluxe for free, you can’t win the jackpot for real, but at least in the free version you can see how the account balance changes when you play with smaller or higher stakes or even dust off such a jackpot. Later on you will be able to follow your strategy. At this point we invite you once again: Take the chance. You can play Grand Slam Deluxe for free and get acquainted with everything that the slot by Stakelogic offers.

In Grand Slam Deluxe online, five reels are waiting for you. Three rows are visible. There are nine paylines spanning this grid, which provide winnings whenever several identical symbols, starting from the left edge, come to lie next to each other on such a payline. You can see how high the winnings are that are promised with your bet at the top of the slot. There you can see the paytable of the Grand Slam Deluxe slot.

We are happy to list for you the main symbols that you will find on the reels:

Nine symbols typical for fruit slots and two feature symbols are waiting for you in Grand Slam Deluxe online. Get started. Since February 2019, players from all over the world have been enjoying the game with an RTP of 95% and medium volatility and, of course, the Grand Slam Deluxe jackpot.

You start by fixing the bet per game round. This can be values between 0.20 and 100 units. Thus, you can control the risk very well. In Superbet mode, you only play at very high stakes. However, this mode opens up completely new winning opportunities when playing Grand Slam Deluxe. We will come to that later.

You spin the reels and wait for the result. If you are in a hurry, you slow them down by clicking the mouse or pressing the space bar. Vary the way you play. You may recognize a tendency that will bring you more winnings. To practice, you should play Grand Slam Deluxe for free. It will save your account.

The wild symbol has only one function: to give you more and higher winnings. It is a wild symbol that can substitute for all other symbols except the scatter symbol. Naturally, you will be delighted with every star you see on the grid in Grand Slam Deluxe online.

The scatter usually triggers free spins. This is not the case with Grand Slam Deluxe online. Here a different prize beckons. Namely the Mystery Win Prize. If you like, you should play Grand Slam Deluxe for free and try this feature. Then you will understand what we are writing about.

It takes at least three scatter symbols to get a Mystery Win Prize. Should you play in Superbet mode, something nice is added. If you play Grand Slam Deluxe in Superbet mode, first of all, there is a Mystery Win Prize for every single scatter symbol and secondly, if at least three of them have appeared, there is a multiplier for all these prizes. A maximum of x4 is possible.

And last but not least, when playing Grand Slam Deluxe for free, you can get to know the Mystery Jackpot. 0.5% of each player’s bet goes into the jackpot and fills it up piece by piece. It is worth at least 500 euros at any time. When it reaches 5000 euros, it is paid out to the person who has filled up the 5000. This gives an advantage to those who play Grand Slam Deluxe with higher stakes.

How to play Grand Slam Deluxe online for real money

If you would like to play Grand Slam Deluxe for real money, you can of course do so. There are quite a few very good and reputable online casinos that have Grand Slam Deluxe in their portfolio. And there are also some portals that offer a bonus that makes it quite attractive. You could start your adventure with a no deposit free spins bonus. Just search for “no deposit bonus” or “sign up bonus.” These free spins are free, so they don’t require a deposit. So you can play for free and win real money with a lot of luck. Just try it out.