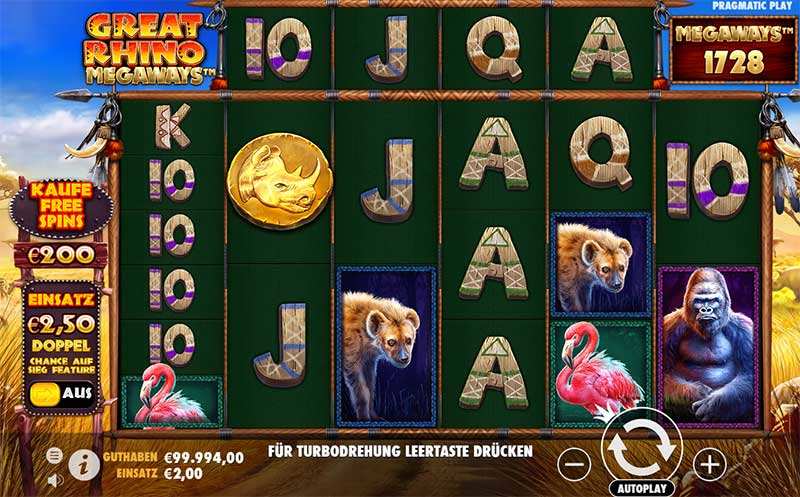 Go on safari with Great Rhino Megaways by Pragmatic Play!

Great Rhino Megaways slot is a slot machine that is quite different from other games in this genre. Pragmatic Play is the renowned developer behind this exciting release. The basic gameplay of video slots has been preserved, in that symbols must be collected in order to create winning combinations. However, no classic paylines appear in Great Rhino Megaways. The structure also differs from other representatives with its six reels and seven rows. The bonus features generate additional excitement that should last for a long time.

The theme of Great Rhino Megaways are the big animals of the African continent. These include the rhinoceros, of course, but also crocodiles, hyenas and flamingos. In addition, there are some classic playing card symbols that you know from many German slot games. A nicely designed background and musical effects complete the coherent overall picture. For newcomers to online casinos, Great Rhino Megaways might seem a bit confusing. In the paytable, you can view all the rules of the slot without registering.

In Great Rhino Megaways online, wins are achieved when at least three of the same adjacent symbols are collected on adjacent reels. Scoring is from left to right only. Instead of paylines, you thus have over 200,000 ways to achieve a winning combination in the slot. Only the highest combination per line is paid out, but individual wins are added if you have collected groups of symbols in several ways. The winning amount of a combination is calculated from the displayed symbols and the bet placed.

Reels two through five have an additional row that spins independently. The slot has a high volatility, which means that on average there is not so often a payout. In return, the chance to win a lot in a short time is increased. The RTP is a statistical expected value that indicates what percentage payout can be expected compared to the stakes after a large number of games. The maximum payout percentage of Great Rhino Megaways is 96.58%, depending on the strategy chosen.

These are the symbols you will find when playing Great Rhino Megaways.

Twelve different symbols appear in this online slot game from Pragmatic Play. These include five animal signs as well as five well-known playing card symbols, which have been staged according to the theme. Apart from that, there are two main symbols that can be used to unlock bonus features of the slot. These symbols appear in Great Rhino Megaways:

After each win, the payout occurs first. Then, all symbols that were involved in a winning combination disappear and the empty positions are filled from above. This process continues until no new winning combination is achieved through the tumble feature.

Other features of the slot

The Great Rhino is the wild symbol of Great Rhino Megaways online. It can substitute for all symbols except the scatter in a winning combination, and only occurs on the top row on reels two through five.

The scatter symbol is represented by the golden rhino coin. It occurs on all reels and leads to a combination when at least four scatters appear in any position on the reels. This activates the free spins feature. All free spins are played at the same betting conditions as the base round in which they were triggered. However, special reels are used. During free spins, each tumble increases the win multiplier by one.

When the free spins feature is triggered, you have a choice of four options. These differ in the number of free spins and the initial win multiplier. Depending on how many scatter symbols have triggered the bonus, the offers vary here as well. The ante bet can be used to determine the bet multiplier. If you choose a higher multiplier, more scatter symbols will appear on the reels. Wins from Free Spins are added together and paid out at the end of the cycle.

Small tip: You can buy the free spins feature directly if you pay 100x the current total bet!

A good trick to speed up the gameplay is to use the autoplay option, so you don’t have to click again after each spin. Music and ambient sounds can be turned off if desired.

Even though the online slot machine can seem overwhelming at first impression, it is worth exploring it a bit. The varied game mechanics are skillfully underlined by atmospheric music and realistic symbols. Moreover, with the number of features and winning types, there is certainly no chance of getting bored when trying Great Rhino Megaways online.

Apart from playing Great Rhino Megaways for free, you can also try to win real money through the slot. For this, you need to register with an appropriate provider. Fortunately, you often get exciting promotions when you register as a new customer at a casino. Great Rhino Megaways, for example, can be found as part of a promotion that offers free spins without a deposit. As an introduction to online gambling, few promotions could be more suitable.