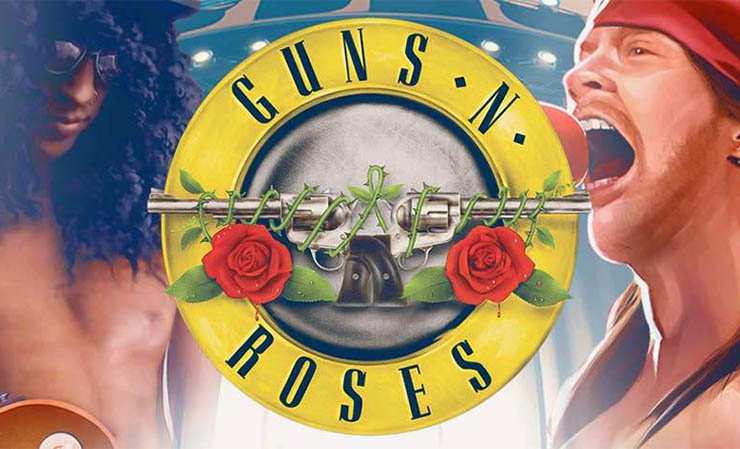 Are you interested in a no deposit online casino bonus? Then pick one of the best casinos that has Guns N’ Roses in its game offer and offers you to play for real money. The slot, of course, openly alludes to the well-known and very successful hard rock band of the same name. Thus, the band members, especially the lead singer, play a prominent role in the slot game by having their likenesses on the reels.

Guns N’ Roses is a 5-reel, 20-payline video slot produced by the casino games software company Net Entertainment, or NetEnt for short. This slot was first released to celebrate Guns N’ Roses’ 30th band anniversary and is packed with interesting and exciting features.

In addition to attractively designed animations, the reels are placed against the backdrop of a concert stage. As a fan of the group Guns N’ Roses, you will appreciate this game for one more very special reason: you can choose the band’s songs to be played while the reels are spinning! Why don’t you try the Guns N’ Roses online slot at your casino? The video slot has

What else awaits you, we have compiled for you here. However, you can also try out the game on a demo and play Guns N’ Roses for free.

If you simply want to get to know this video slot game without any obligation, then you can play Guns N’ Roses for free. Once you have familiarized yourself with the game, you can play for real money. So at the beginning of the game, first determine your stake. Depending on the online casino, you can start with as little as 1 eurocent. You can set the amount individually as well as the number you want to play in each row. Alternatively, NetEnt also offers you the option to directly set the maximum amount and start the game by pressing “Spin”, which then sets the reels in motion. Additionally, you can use the “Autoplay” button to let the reels spin automatically for a certain duration without interruption and focus on the graphics and paylines.

In keeping with the theme of this online slot, the Guns N’ Roses logo is the wild symbol. This can land on any reel except reel 3 when the Appetite for Destruction feature is activated. This feature is named after the band’s first regular album. The Wild symbol can substitute for all other symbols except the Bonus symbol. The bonus symbol is a deliberately old-fashioned record.

Once the Wild Symbol appears, the software allows you additional chances to win by initially making it bigger and bigger and can change into any other symbol – with the exception of the Appetite for Destruction. This wild symbol is a so-called overlaying wild symbol in the shape of a cross, which is triggered randomly and can substitute for all other symbols.

Play Guns N’ Roses for free and without registration and get to know a special feature of the slot game: the Legend Spins feature. This is also triggered randomly and you get 3 repeat spins with 1 or 2 wild reels arranged on top of each other:

In addition, the Guns N’ Roses video slot comes up with a solo multiplier function. Here you will be randomly rewarded with a multiplier between x4 and x10. This feature is activated when you have a winning combination of at least 3 identical symbols on a payline. For this, you need to get 3 bonus symbols on reels 1, 3 and 5 in the base game to grab cash wins, free spins or the ever-popular and attractive bonus rounds.

With Guns N’ Roses, the software company NetEnt has created an attractive game that will be especially popular with fans of the band, because you can listen to your favorite music while playing for real money and winnings in a multi-faceted slot. You can play the slot completely free of charge and without registration beforehand. The graphics and atmosphere of a rock stage will appeal to you. Find one of the best online casinos and play the slot!