Hall of Gods by NetEnt 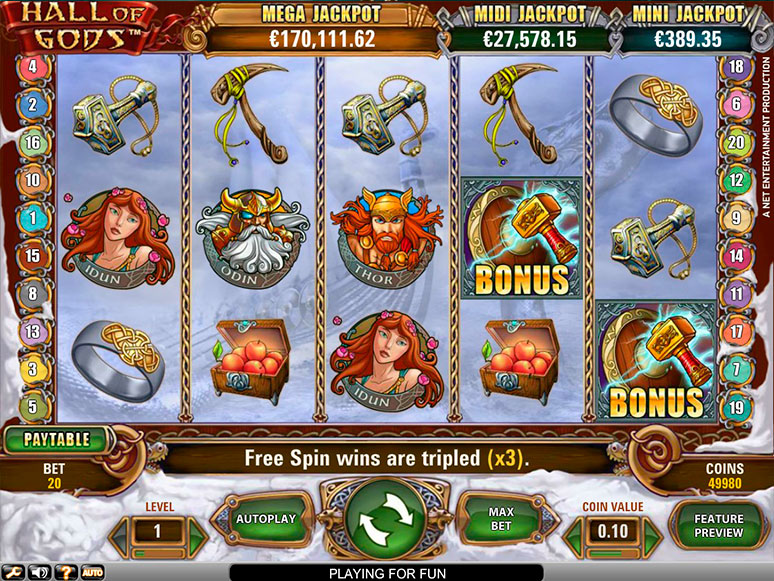 With Hall of Gods from NetEnt, you will learn about Norse mythology including some of the most important gods of the Vikings. This slot isn’t just about setting the reels in motion, here you’ll actually walk in the footsteps of the ancient Vikings, who spent their entire lives striving to be accepted into the Hall of Odin after death. This is exactly what NetEnt must have remembered when they designed the Hall of Gods slot. Here, everything is indeed under the sign of Odin and his gods. Since the legendary Nordic gods are not known to every player in Germany, you could probably first play Hall of Gods for free to familiarize yourself with them.

The Vikings were known for their campaigns of conquest, which they carried out with great care and with a certain strategy in mind. In this slot game, you can grab a part of this rich booty online, for example, by hitting one of the three jackpots. However, the jackpots are only the beginning of the bonus features in this game. When you play Hall of Gods, you can expect multipliers, expanding symbols, free spins, and a bonus game, and all of these features provide non-stop excitement and rousing action, all without any tricks or hooks! Stop. Before you jump right in and start playing Hall of Gods for free without registration, you should heed our first tip. Real warriors are vigilant and that’s why we recommend you to read through our guide with all your attention now and only then play Hall of Gods online.

Hall of Gods at a glance

Hall of Gods slot brings Valhalla to the online casino. To emphasize the Viking theme, NetEnt has equipped the slot with main characters representing the most powerful gods of the Vikings. Fittingly, while playing Hall of Gods, you can see one of the most famous and infamous Viking ships in the background, as well as a monster protruding from the Arctic Ocean. However, the software developer has also paid plenty of attention to the casino or slot part. For example, we immediately noticed the more traditional sound effects when landing the reels when we started playing Hall of Gods for free. The widespread layout of five reels and three rows should also be familiar to most German players.

A surprise awaits the brave player when he turns his gaze to the bonus features. This is where Hall of Gods online really comes up trumps, because the slot game really has all the features you could wish for. In this respect, you really enter Valhalla, and mind you, even when you play Hall of Gods for free without registration. Sounds too good to be true? Read on and let us convince you otherwise.

How to play Hall of Gods online

To get to know the rules of Hall of Gods, a cursory glance at the game information is enough. In fact, the rules are so simple that you can find them out directly in practice, for example, by playing Hall of Gods for free. For instance, hover your mouse over the numbers on the left and right of the reels and one of the 20 paylines will be displayed. Now you just have to remember that a winning combination must land from left to right, according to the respective number of identical motifs.

On the other hand, it might take a little longer to memorize each of these 13 symbols:

The monster of the seas is represented by a green snake-like dragon creature in Hall of Gods, and this very creature is our wild symbol. However, you don’t have to be afraid of this monster, because it is exclusively at home on reels two, three and four. The Hall of Gods wild symbol can substitute for all other symbols except for the bonus symbol and the scatter symbol, and if it plays its part in creating a winning combination, it will automatically expand to fill the entire reel.

Hall of Gods has a total of three progressive jackpots, the Mini, Midi and Mega jackpots. Consequently, the jackpots cannot be hit when you play Hall of Gods for free. If three bonus symbols represented by the shield and the hammer land, then you have the chance to hit one of the jackpots or secure an instant win in the bonus game. Basically, this is all about finding three of the same motifs in a Pick Me game.

The two crows are the scatter symbol of Hall of Gods. If three or more of these land, you go straight to the free spins without any detours. But watch out! The more scatter symbols land, the more free spins you get. As always, the best comes at the end, and of course this also applies to the gods. Namely, all wins are multiplied by a x3 multiplier and the free spins can even be triggered again.

Conclusion and play Hall of Gods for free

When you play Hall of Gods, you’re not just playing a slot machine. Thanks to NetEnt, a real Nordic Viking adventure begins with the very first spin! Here, you win with five of the most powerful gods of Norse mythology, and in the halls of the gods you can actually land almost unbelievable winnings, thanks to the particularly numerous bonus features, at the top of which are of course the three progressive jackpots. If you take on the Vikings in this slot game, then free spins, multipliers and an expanding wild symbol make sure that the thrill doesn’t get any respite.

So, there are several reasons to head to Valhalla to play. Fortunately, the gates are already open with us, on our website, and you can play the slot right now for free without registration.

If you want to win real money and secure a whopping welcome bonus at the same time, then you should sign up at an online casino today. In addition to the deposit bonus, some casinos will even give you free spins without a deposit as a bonus, which you will receive immediately after you have created your user account.