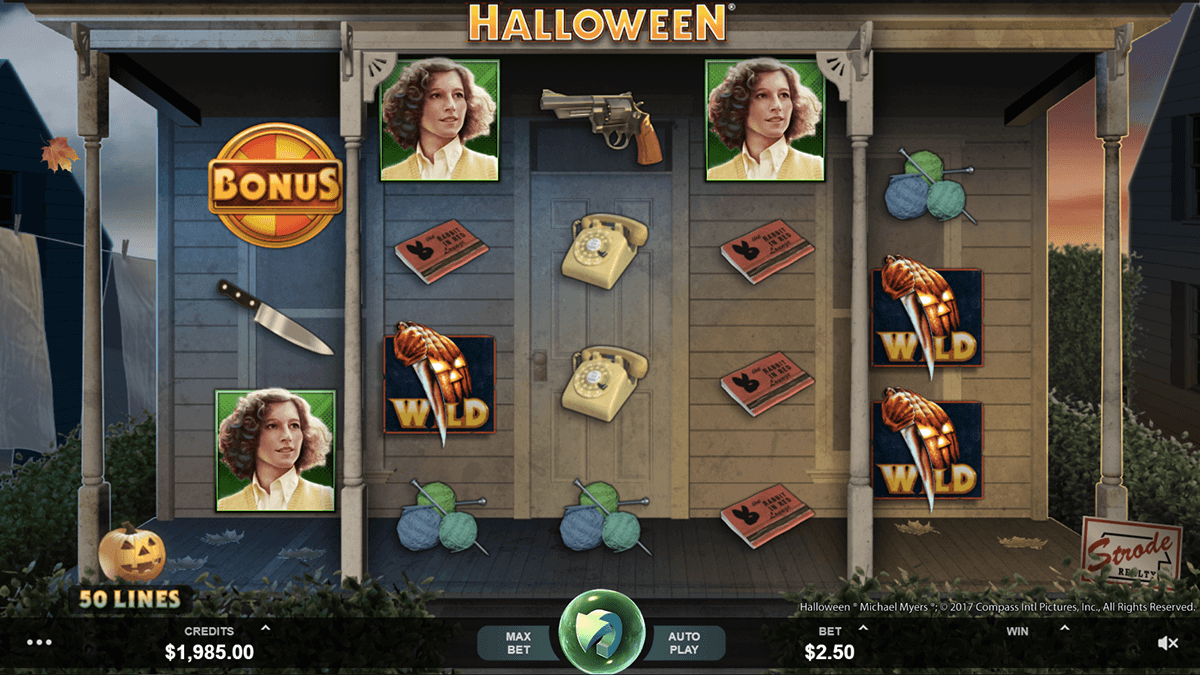 Halloween, the horror classic from 1978, was made into a cult film by legendary director John Carpenter, which still inspires many people 40 years later. The film revolves around the Michael Myers character. He murders his sister on Halloween night in 1963 and returns to his hometown 15 years later to continue the killing spree he started in 1963. This film was the first installment, which was followed by 9 more in the years to come. In 2010, it was named one of the 100 greatest films of all time. Based on this horror classic is the slot machine Halloween, which brings home the man Michael Myers, the night before All Saints’ Day and the other well-known characters from the movie in the best possible way. It was developed by Microgaming. The slot machine features the iconic characters from the cult movie, as well as the famous soundtrack from the cult movie, of course.

The game Halloween is a slot, which is equipped with five reels, three vis four rows and with up to 50 paylines. Thus, when playing Halloween for free, the player can look forward to a fantastic slot machine that is second to none. As symbols you will find sewing needles, telephones, matches, wool, knives, guns and clown masks. Of course, the four characters from the famous movie will not be forgotten. These include:

Among the features when playing Halloween by Microgaming online is the Wandering Real feature. Here, three reels can be spun synchronously. The Trick or Treat Wheel feature is triggered with the scatter symbol. For this, it must appear three times or more. During the Trick or Treat Wheel feature, the reels will spin until the Free Spins feature is activated or the Boogeyman Bonus feature. Any cash prize won during this feature multiplies the bet by up to ten times. During the Trick or Treat feature, cash prizes can be collected. With the Boogeyman Bonus Feature, the player is invited to “Pick & Win” during Halloween free play, where numerous cash prizes can be skimmed off. If the player wins, the multiplier increases by 1. If the player finds even 10 cash bonuses, the multiplier increases up to 20. However, if one encounters the Michael Myers symbol, half of the winnings must be given back and the feature is over.

Halloween free games from Microgaming can be played with different stakes. The minimum bet is 50 cents. The stake can be increased up to the maximum stake of 200 euros.

this slot is really very successful and represents the theme well. A lot of the childish fun that we know from Halloween flows into this slot game, but the creepiness does not come too short.

A slot like this is always fun to play, you can really enjoy it, but something special is missing from this slot, so we would get even more thrills. Otherwise, it’s a good all-time favorite of ours for the spooky Halloween time. But it’s best to take a look at the slot yourself, we promise you won’t be disappointed.