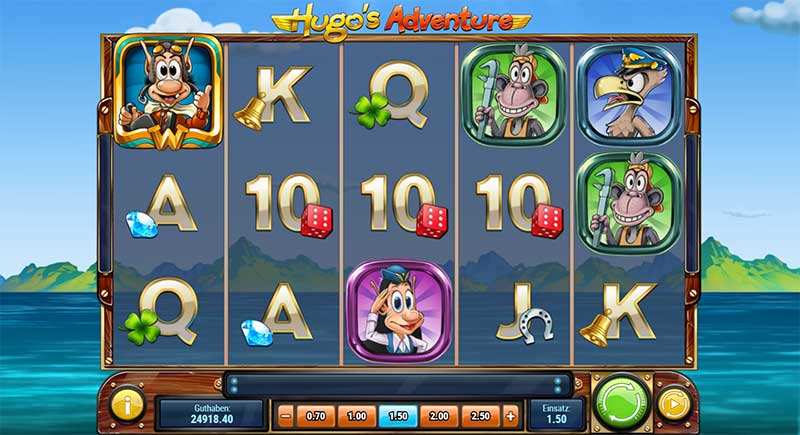 At first glance, Hugo’s Adventure reminds of a game for children. Both the playful music and the childlike, naive design, such as the airplane, the balloon heart, and the funny main character, make this feel like a cartoon for kids. In fact, 90s teens might still recognize the character from a game show on Kabel Eins. But behind Hugo’s Adventure as a slot, Play’n GO has hidden much more than a simple nostalgic slot game.

Right at the beginning, the main character greets his viewers with an invitation in German, for example, that the adventure can now begin. In fact, the slot machine not only shows the typical 5×3 grid. In additional games, you can experience Hugo’s Adventure on air and water. Thus, the slot machine released in Germany in 2019 is an exciting alternative in the slot machine monotony.

Presented here first of all is a 5×3 reel system with ten paylines. However, the main game in Hugo’s Adventure is complemented by bonus games. For example, by the so-called Underwater Adventure. Here, when two submarines appear on the board, you travel to an underwater world and have to find treasures. However, if you choose the wrong one, you will be eaten by a shark or hit by an anchor. If you choose the right one, you get to fight the crocodile. If you defeat it, your winnings are further multiplied at random.

Because the combination of three airplanes as triggers is much rarer than two submarines, the second bonus game, Air Ace, is a rarity. Here you can watch Flying Wilds and watch the leprechaun capture hearts or bombs via airplane. In addition, you will get extra lives in the Play’n GO add-on game.

If you play Hugo’s Adventure for free, you can also test this feature, after all, the spins are free. On our online platform you can do this even without registering.

The sound is bright and friendly in accordance with the adventurous-child theme. The specially composed background soundtrack creates an excited tension with its acoustic effects, interrupted only by some fanfares when there are wins. The design is based on the games from the popular show from the 90s. When you play Hugo’s Adventure for free, you can find similar games in the bonus games as in the show back then.

Hugo is the well-known goblin character from the game show. However, the central game remains a slot and thus gambling. In the 90s role model, on the other hand, the games were games of skill. Nevertheless, you can indulge in nostalgia for the cult show when you play Hugo’s Adventure for free. Because here, at least in Underwater Adventure, you can make your own decisions in a 33% chance.

Here are the features of the slot at a glance:

How to play Hugo’s Adventure

The aim of this slot, whether you play Hugo’s Adventure for free or try it out as a real money game in an online casino, is also to achieve as many and high-quality winning combinations as possible. All you have to do is place a bet and click on the spin button. Already the reels start to move. If bonus games occur because certain symbols have been spun on a payline, all you have to do is follow the instructions on the game screen.

When betting in Hugo’s Adventure you can choose between 0.10 to 100 currency units. In a real-money game at the casino you trust, these values can fluctuate depending on the currency, of course. When you play Hugo’s Adventure for free, on the other hand, you can play through all the bets and the winnings that change with them yourself. This will also give you a good feeling about how to bet in a real money game.

The symbols in Hugo’s Adventure Online

Of course, the eponymous leprechaun is the main character with the highest individual value. It is followed by the other characters, including a flying captain, a scolding raven and a mechanic monkey. Unlike usual in games from Play’n GO, card symbols are also found in the game last.

All symbols in Hugo’s Adventure slot, sorted by their value:

In addition to the main symbol, the protagonist is also a Wild symbol and substitutes for all other symbols except the Bonus and Scatter symbols. In Air Ace, where he moves from one reel to the next, he even manages to do so flying. When you play Hugo’s Adventure for free without registration, you can best see this phenomenon for yourself.

You can also get free spins via the various additional games in Hugo’s Adventure Online. For example, the airplane, when it appears three times on the grid, is a scatter symbol that triggers a maximum of 20 free spins. However, the rules ensure that there is a limit built in here, unlike other free spins modes. Namely, when the main character flies into a bomb or reaches 20 free spins. With the latter, you jump further into the Underwater Adventure in Hugo’s Adventure Online, for example.

You can experience additional winning opportunities in Hugo’s Adventure if you play through the aforementioned bonus games. Provided you are lucky with the lives that are randomly drawn in advance, you can also catch multipliers here that will increase your winnings up to five times. Hugo’s Adventure from Play’n GO is thus more than just a simple slot, but a kind of multigame machine with many surprises.

A specialty when you play Hugo’s Adventure for free without registration is the awarding of lives to the main character Hugo. This is because the protagonist can definitely die in a very creative way in the additional games, whether by a piranha swarm, a shark attack or aerial bombs. Extra lives are drawn at the beginning of the bonus games and ultimately determine how long you can accumulate wins in the games.

You can’t trick in games of chance, chance decides. No strategy will help either. Only experience in dealing with stakes will protect you somewhat. Therefore, we always recommend to practice. So you should play Hugo’s Adventure as much as possible to get a feeling for losses and winnings.

This game will charm not only former 90s viewers. The slot machine, designed especially for the German Hugo fans, is very entertaining. So try it out for yourself by playing the slot machine for free without registration. You can do that with us at any time.

If you are itching to finally try out Hugo’s Adventure under real conditions, you should visit one of our top gambling portals that we have compiled for you to choose from. In doing so, you can also take advantage of current bonuses without an account top-up, such as free spins without a deposit. Just visit our latest promotions for this and other games from the manufacturer.