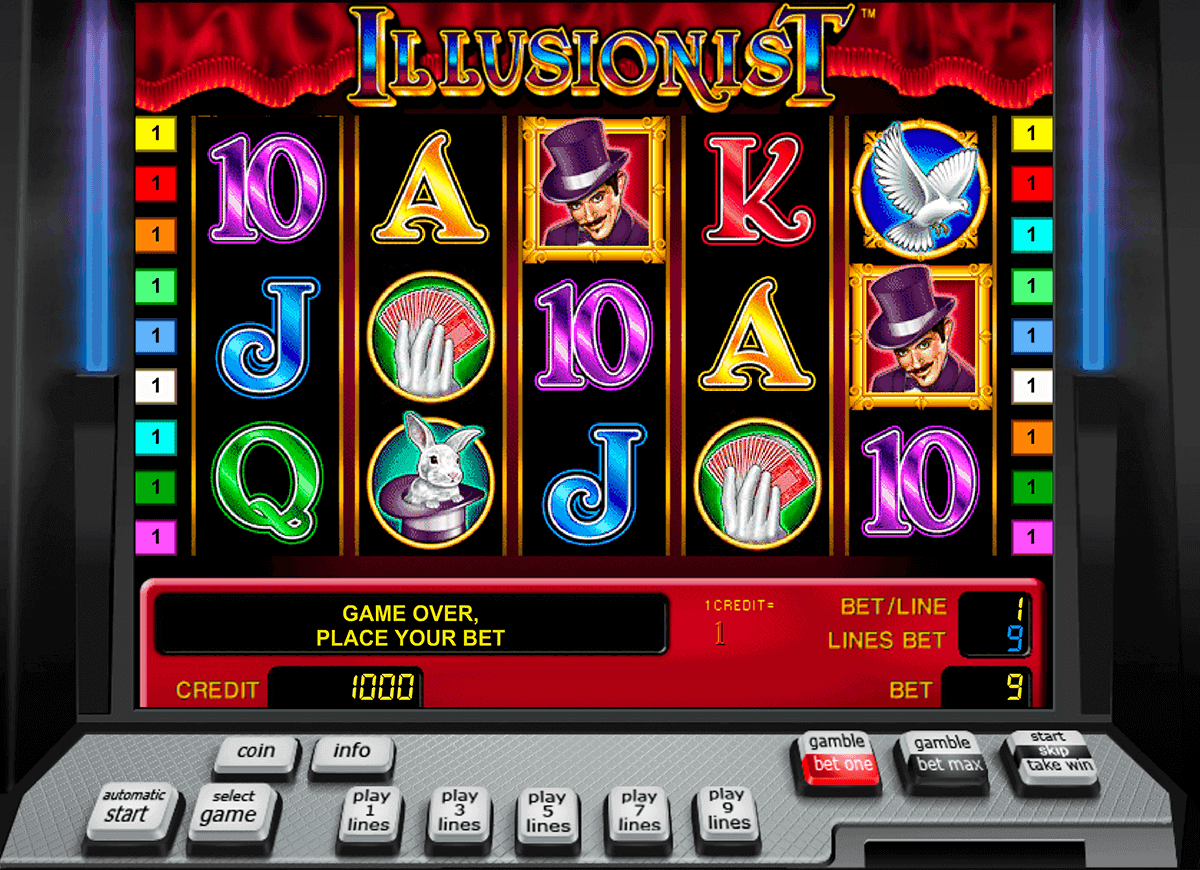 The Illusionist slot from Novoline is another game from the software forge of the Austrians, which impresses with its simplicity. The rules are simple in this Novoliner as well, so even a rank beginner could jump right into real money play here.

Illusionist is a classic slot that will enchant you with its five reels and nine paylines. While it may look rather dusty at first glance, you shouldn’t think that this slot game has lost its luster and magic. Quite the contrary, because this game offers you a decent gaming entertainment – be it for real money or in demo mode. Because Illusionist is easy to play and also includes some elements that will keep you enthralled.

How to play Illusionist online

This Novoline slot is exciting for one reason alone: your bet per line can bring 5,000 times the winnings here. Of course, you will need some luck to win this jackpot, but the free spins and the stacked wild symbols included in them also have their very special appeal.

It should be noted that this slot is different from most other 5-reel slots, because it has the qualities of a classic game. Its aesthetics are wonderfully old-fashioned in terms of its look and sound effects. On the reels you’ll find the classic symbols with the cards 10 to K and you’ll also get to hear the typical sounds that usually only the good old fruit slots make. What else does this slot have to offer?

You won’t believe it, but the slot is equipped with a control panel like the real slot machines, where the buttons light up as soon as they are activated. But Illusionist has a big advantage: you can play Illusionist online for free without registration and thus convince yourself of its advantages.

A video slot disguised as a classic

Apart from the fact that you can play Illusionist for free, often without registering, this slot also impresses with its animated winning symbols. For example, the rabbit looks out of the magic hat. As soon as there is a winning combination with this symbol, the rabbit disappears and it rains coins from the hat over the display.

However, these wins only occur when you form winning combinations in which these symbols show up five times on the paylines. The glittering gloves act as wild symbols. And since these gloves are magically entwined, they can complete or add to winning combinations by substituting for all other symbol characters. Scatter symbols have not been included in Illusionist. Instead, the magic gloves bring you free spins when they appear on reels one and five and fully occupy the reel. In this case you will get 15 free spins.

Sure, this slot has a touch of magic, but that doesn’t mean you can take advantage of tricks here to increase your chances of winning. Also in Illusionist, the symbols are pre-determined by a random generator and nobody, not you and not the operator of the online casino, can manipulate it in any way.

Certainly, Illusionist is not a particularly magical slot, despite the magical theme. And it doesn’t have much to offer when it comes to bonus features either. But still, this game has a certain charm thanks to its vintage look and not to mention the jackpot that awaits you here. There’s no shortage of fun to be had here, whether it’s with a clever strategy in the real money version or when you want to play Illusionist for free.