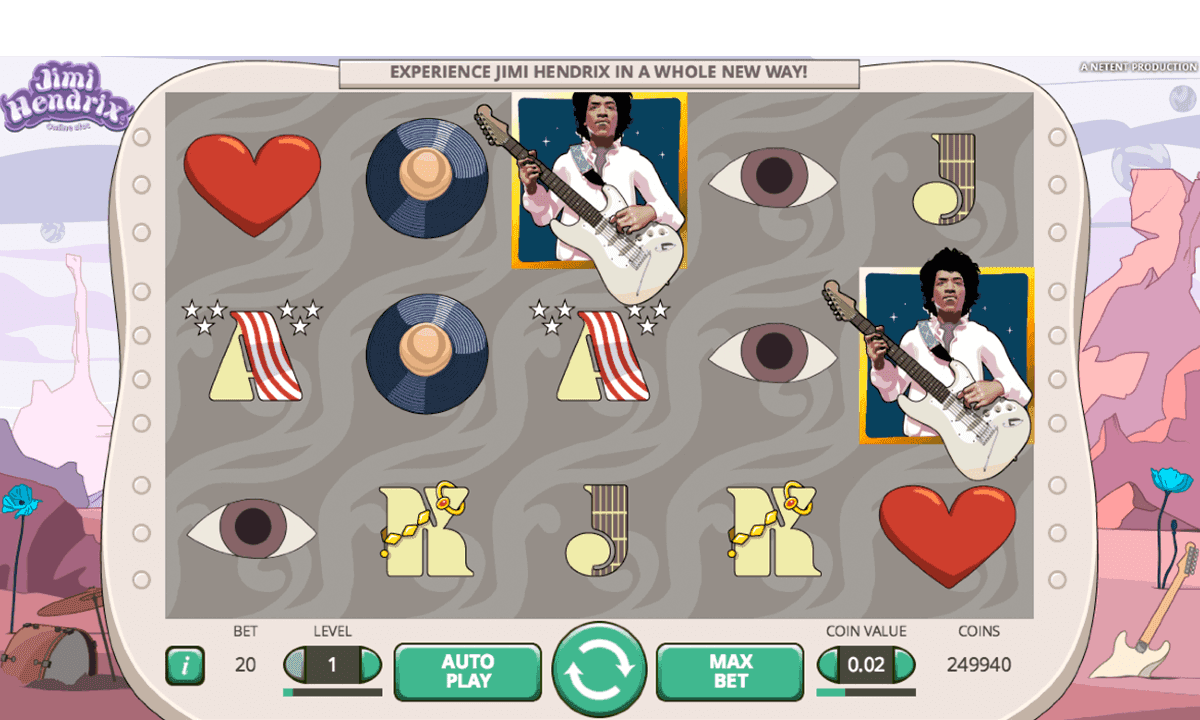 If it comes to the definition of a guitar god, one name will come up: Jimi Hendrix. He was a hippie, as he is written in the book and as he still lives on in the hearts of his fans. Hendrix was an exceptional musician in a class of his own and an icon for all guitar players. It was only a matter of time before a software developer dedicated himself to this man and his music and immortalized him in a slot game. Who would fit better for this than NetEnt, the developers have developed a slot that is guaranteed not to disappoint you.

Feel transported back to the time of the hippies when you play the slot for real money in a NetEnt online casino and try your luck. However, you can play the slot for free without registration and thus first get to know the rules and make your own picture of the slot and its chances of winning.

Jimi Hendrix is the second slot after the release of Guns N’ Roses and is also a real blast. This NetEnt slot features 5 reels and three rows, as well as 20 paylines. You can, as usual with NetEnt, also set different bet levels and coin values on this slot to set the bet between 0.20 and 200 euros.

Let’s take a look at the features of the slot:

Red-Guitar Re-Spin Feature: Four red guitar symbols trigger this feature. If another guitar symbol appears during the re-spin, then you will get new free spins. With a little luck, this feature can last for a long time and bring you handsome wins.

If the purple Jimi Hendrix symbol (Purple Haze) appears on the first reel, then all the card symbols (10 to A) are converted into wild symbols and provide you with rich wins.

The Pick&Click feature: It forms the highlight of the slot. As soon as the white Jimi Hendrix symbol appears on reels 3, 4 and 5, it is activated. You will then have to click on several speakers, under which a cash prize is hidden. If you uncover three identical symbols, then the prize will be credited.

Besides these three features, there are others, such as:

You can see that there is a lot to discover in the slot game. Therefore, you should first play Jimi Hendrix for free, without registration, to familiarize yourself with all the features.

Surely, you can play Jimi Hendrix for free and that on some websites even without registration. If you visit one of the NetEnt online casinos, you will usually need to register – even for the free game. When choosing a casino, look for one that offers a no deposit bonus. In that case, you will receive some free spins that you can use for the slot, or a certain amount of real money. So you can play Jimi Hendrix for free with real money, but without your own financial risk.

Jimi Hendrix by NetEnt fascinates not only with a very exciting gameplay, but also with a fabulous sound, great graphics and an excellent RTP of 96.90%. The latter thus ensures regular winnings, in addition to the many special features.

Even if you don’t like the music of Jimi Hendrix and guitar solos, you will still be thrilled by this slot. Because the numerous bonus games provide plenty of variety while playing and thus plenty of fun. Especially the Red Guitar Re Spin feature has proven to be very lucrative when playing, while the Pick and Click feature rather provides additional entertainment. All in all, NetEnt has brought a game to the online casinos that pretty much fulfills the expectations one has of a slot.