King Of The Jungle by Bally Wulff 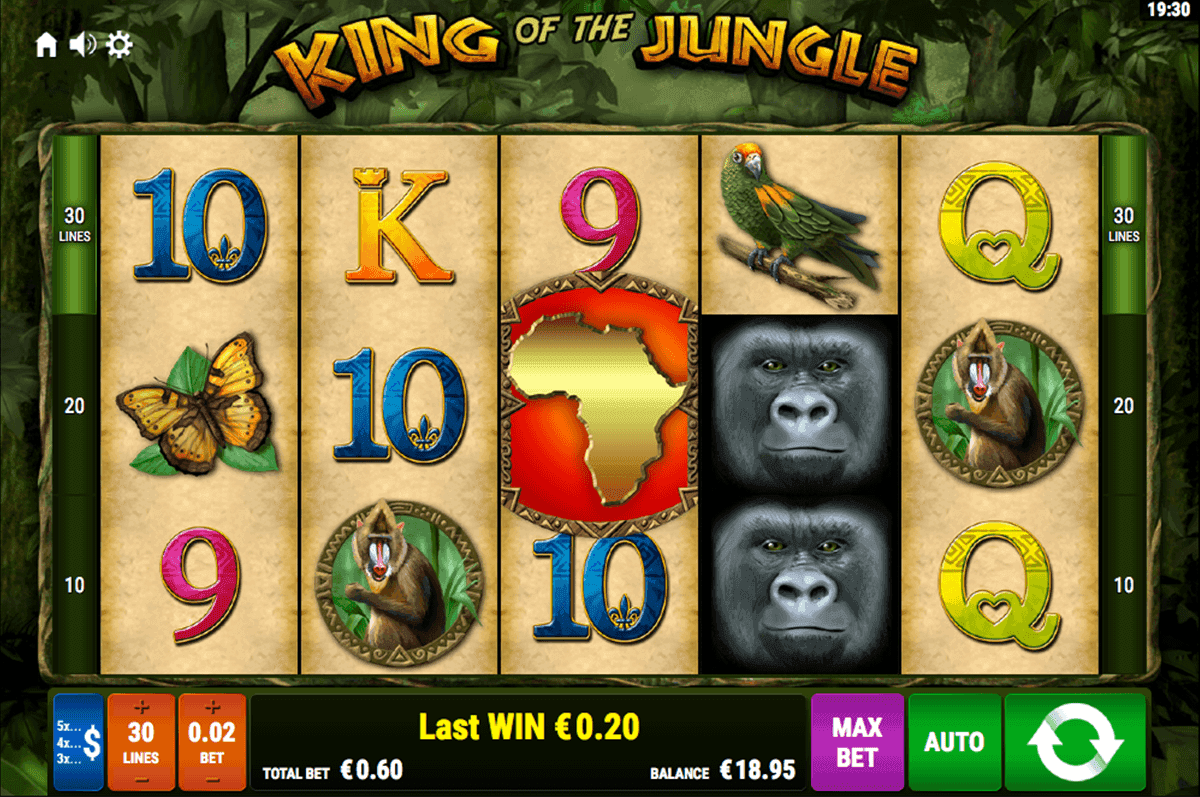 Bally Wulff comes forward with the King of the Jungle slot game online. The whole game is about a jungle somewhere in the depths of the African continent. The game is characterized by numerous animal symbols on the reels and the jungle look makes the wildlife feeling perfect. The lifelike implementation of the animal images not only makes the hearts of nature lovers beat faster. When playing King of the Jungle free of charge without registration, the player can get right up close and personal with the king of the African jungle. But the king in this game is by no means, as perhaps suspected, a lion. No, the real king in this case is a giant gorilla. Even if this one rather inspires awe, it is this one that is responsible for the generous winnings when it appears.

Since the entire game revolves around the main character, the gorilla, and only the animal world is included, you get close to nature. An extra portion of exoticism is also provided by the growing extraordinary plants, which appear again and again during the game and also stand for larger winnings. For this, however, they have to stand in a line several times. The jungle adventure around King of the Jungle can begin. Who will chase away the king’s treasures?

The rules and the gameplay

The gameplay of the slot King of the Jungle by Bally Wulff is special. Especially the colorful mix of animals and plants and the lush green of the jungle make the online game a special experience. This way, you can play King of the Jungle for free and test which strategy is the best before playing for real money. There are no tricks that can be used for gaming, because as with all other slot games, the winnings cannot be influenced.

The game is played on 5 reels with 15 symbols each, which can provide plenty of cash in the right winning combination. In total, there are 30 paylines in this Bally Wulff slot. But these do not necessarily have to be fully exploited. Optionally, only 10 or 20 of the paylines can be activated. Fewer lines can be advantageous when maximum bets are placed. In this way, scatter losses can be minimized somewhat. 10 cents is the minimum bet on this slot game. However, if you want to win higher sums, the maximum bet of 1.50 euros per line and spin can be made.

Free spins at King of the Jungle

Of course, the player can also receive free spins with this Bally Wulff slot machine bonus. However, the player cannot influence this himself. There is always a good portion of luck in addition to a strategy. In order for free spins to occur, scatter symbols are needed. In this case, as already mentioned, it is the outline of the African continent. If this symbol appears at least three times on the reels, the player gets 10 free spins unlocked. For this, more of them can be won in the free spins rounds. However, in addition to the scatter, you also need the wild symbols. Depending on how often these appear on the reels, there are different amounts of Free Spins credited. Through the risk function, the winnings can also be improved. For this purpose, either the risk ladder or the card game can be used.

King Of The Jungle Golden Nights

How the king of the jungle and golden city nights fit together, you can experience first hand in this Bally Wulff game! With King Of The Jungle Golden Nights you play two games on one machine and can enjoy the splendor of the African jungle as well as the glittering world of the big city at the same time.

The King of the Jungle

The King Of The Jungle Golden Nights slot with five reels is all about the king of the jungle, who appears in the form of a gorilla. He is assisted by other animals, such as

With the gorilla as the wild symbol, the payouts can be skyrocketed as it helps to create winning lines. The map of Africa is the scatter and comes with ten free spins in the bag.

Up to this point, this variant is similar to the original King Of The Jungle game.

Now for the special extra of this variant: It is the Golden Night Feature, which can be activated automatically with every spin, if you place a corresponding bet.

This feature triggers a jackpot game that will light up the nights in fireworks and gold with a maximum amount of 50,000.

In the jackpot mini-game, three chests appear. These open and when they are all filled, the jackpot game starts. You collect points that increase the temperature of the jackpot thermometer. The hotter it gets, the higher the prize!

The individual levels range from iron, copper and bronze, to silver, gold and jewels, all the way up to the super jewel level, where the highest payout can be expected!

… a winning combination! At least as far as the Bally Wulff King Of The Jungel Golden Nights slot is concerned, where you can grab yourself a jackpot!

King of the Jungle is a wild game in the truest sense of the word, which can convince not only with its visuals. Generous free spins and a good payout rate of just over 96% should be a good argument for the game for many. If you want a more relaxed experience, you can also play King of the Jungle for free at the online casino without registration.

King Of The Jungle slot details