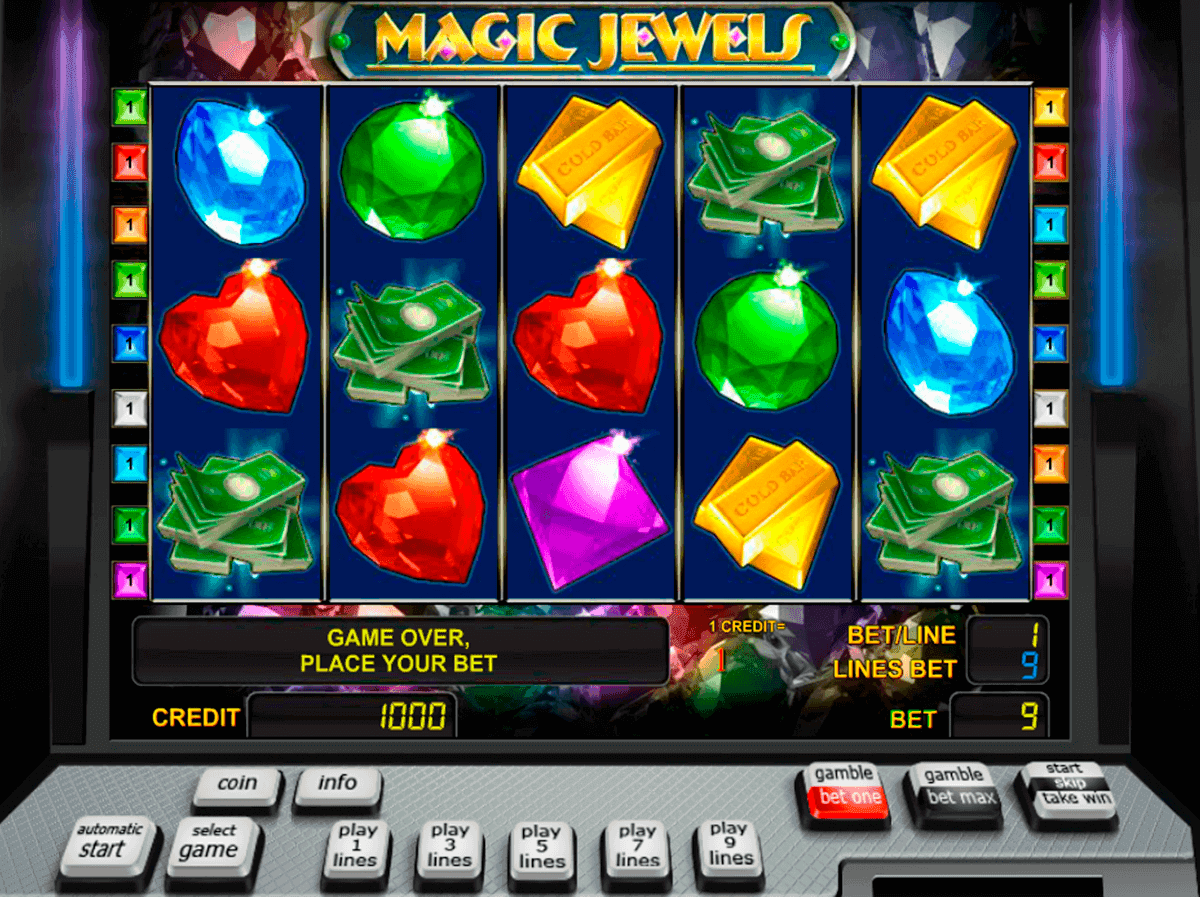 Magic Jewels comes from the house of the manufacturer Novoline and is a slot game that features colorful diamonds and jewels. The aim of the game is to find at least three identical stones and remove them. The more of them can be combined in the end, the higher the prize will be. In online arcades you can even compete against real opponents and not only have a lot of fun, but also hit the jackpot. Without registration, it is possible to think of a strategy in advance and play Magic Jewels for free. Here the rules can be learned more easily and afterwards you can compete against an opponent or try your luck alone.

In total, there are five different types of gems in this slot machine, which should match in color and lie next to each other. Should this be in triplicate, so-called combos are formed, which complete paylines and then allow a payout. In the background there are images that become recognizable by the dissolving of the gems. As soon as completed combos meet, they are blasted and the fields lighten up and more gems slide down. It is important to use as few moves as possible to resolve the main characters and still be faster than others. Particularly valuable here are triangular jewels, which activate a lightning function, with which further stones can be blown up without much effort.

Special bonus images and extras round out the game, with which it is possible to resolve more combinations and remove fields. Definitely, this is an exciting game, because only after the completion of a game round you will know whether you have won or not. Magic Jewels online can be played in many casinos, and is a slightly different puzzle game, which can definitely provide variety. Once a player account is opened, the slot game can be found under the instant games section and you can immediately play Magic Jewels for free. Playing Magic Jewels for free is especially helpful if you want to try something new every now and then without having to bet real money right away.

Gambling against others is also possible

A somewhat different slot machine without reels was implemented with Magic Jewels, which also includes a multiplayer mode. This means that you can play directly or time-delayed with another participant. This, in turn, naturally increases the chance of better winnings and paylines if the right strategy is followed and tips and tricks are applied. Of course, the slot can also be used at any time without an opponent in order to pass the time and collect colorful gems. Whether with real money or without is left up to the player. Also the possibility to play Magic Jewels for free without registration in a casino is feasible. The winnings achieved are then not paid out, however, since only in play money mode can be gambled.

To start the game, an account must be opened in the online casino.

The player account can be easily opened by clicking on the “Register” button and following the instructions there. Every now and then, there is even a bonus added by the casino when the player account is opened. In addition to free spins, it can even come to an extra credit if the player makes a deposit in advance. So now once the player is logged into the casino, he can pick the game of Novoline and play with or without real bet. The game system works as follows:

In total, the five different jewels, which can be distinguished by color, should be combined. For this, the computer mouse is needed, with which stones can be exchanged among themselves, so that color combinations can be created. These should consist of at least three gems of the same color. As soon as these lie next to each other, they are dissolved and new glittering stones slip in. The biggest challenge here is to dissolve all the dark areas as quickly as possible and in just a few moves. To duel now with other, it is called to be better than the other player.

Using extras in the game

Usually in a slot machine you know that wild symbols or scatter symbols help you to open new opportunities and activate paylines. In Magic Jewels there are also special stones that can increase the chances of winning. Triangles provide so-called lightning bolts that can remove several stones at once. Explosive jewels, on the other hand, are another extra that can also destroy surrounding diamonds. Speed is paramount in this game, as well as tactical action to need as few moves as possible and still be able to dissolve many jewels. Each move costs 100 points, so you should keep an eye on them. At the end, the winner receives 1000 bonus points and a small cash prize, so it pays to act thoughtfully and form correct winning combinations.

With Magic Jewels by Novoline, a somewhat different slot machine was brought forth, which can be played either alone or in multiplayer mode. Colored jewels and a perfectly elaborated display ensure that there is definitely no boredom. Those who work with the right strategy here and form perfect combinations can achieve such high winnings.