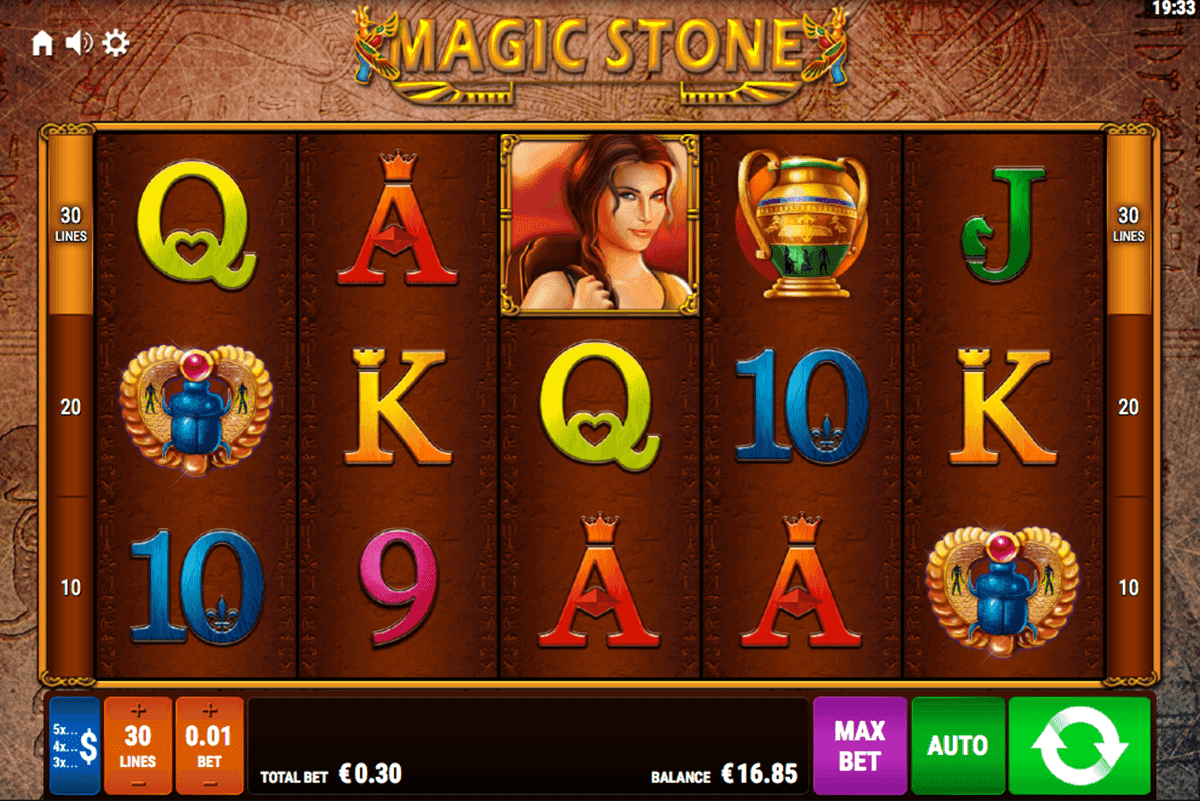 Visitors of the Magic Stone slot are taken to ancient Egypt, where mysterious symbols are found. With the nice lady, gamers online go in search of treasures such as treasure chests, ancient jars and more. However, the most significant thing is to find the tablet with hieroglyphics, because this one is magical and conjures up large amounts of winnings to the player’s account.

The slot game was created by the famous software provider Bally Wulff. Its games are extremely popular because of the high-quality design and Magic Stone does not disappoint players either. The chances of winning due to the RTP of over 96% in online casinos are considered relatively high, so playing can be quite lucrative.

If visitors would like to convince themselves of the slot game, they can play Magic Stone for free without registration. Just click on the game and Magic Stone will start automatically after a short loading time.

Those who have decided to take advantage of the high chances of winning when playing with real money, register at one of the best online casinos and additionally benefit from the bonus offers of the operator.

How to play Magic Stone online

Gamers first have the choice between playing Magic Stone for free or with real money stakes. The structure, rules, setting options and features are completely identical in both Bally Wulff game versions.

Gamers can play Magic Stone online for free without registration or with real money either from home or on the go. The game was designed by Bally Wulff for use on all devices with Internet.

The five-reel, three-row layout is now well-known and the most popular among experienced players. The ten paylines in Magic Stone are fixed and cannot be adjusted. Therefore, every gamer has the same chances to win.

Below the game is the information with the rules and features for the game. Next to it, the button that allows you to set the bet amount has been placed. High rollers use the “max bet” button to immediately set the highest amount per spin.

The remaining two buttons are for starting the game. Gamers can either use the Auto button or the Spin button. Auto will automatically spin the reels until they are stopped by pressing the button again. If the Spin button is pressed, the reels of the game will spin once.

A winning combination occurs when there are at least three identical symbols on any of the ten paylines. When lined up, these combinations start on the first, left-hand reel and move to the right.

If there are identical symbols in the specified combination on multiple paylines in Magic Stone, the winning amounts are added together. Only the highest win per line is paid out.

Depending on the symbol, number and bet amount, the winning amount varies as shown in the paytable:

The explorer and the Magic Stone are main characters of the game, which, besides the multiplier, bring other features to collect high winning amounts with luck.

Any winning amount in Magic Stone can either be accepted by the player or used again in a feature game. Gamers have the choice between the risk ladder and the card risk game.

Play slots for free without registration visitors can directly on our website to familiarize themselves with the slot game. Rules and features are learned free of risk.

After playing a few rounds of Magic Stone for free, some users decide to wager real money.

For playing with real money, gamers should choose one of the best casinos. Online casinos no deposit bonus and other lucrative promotions such as new customer bonus, etc. are accepted so that as little money as possible from one’s budget has to be used.

Magic Stone is something like a bonus feature, and when it appears, it is fun.  Extra features are not for everyone. So if you like an Egyptian game, then this game is perfectly fine – it comes with an RTP of 96.14%.