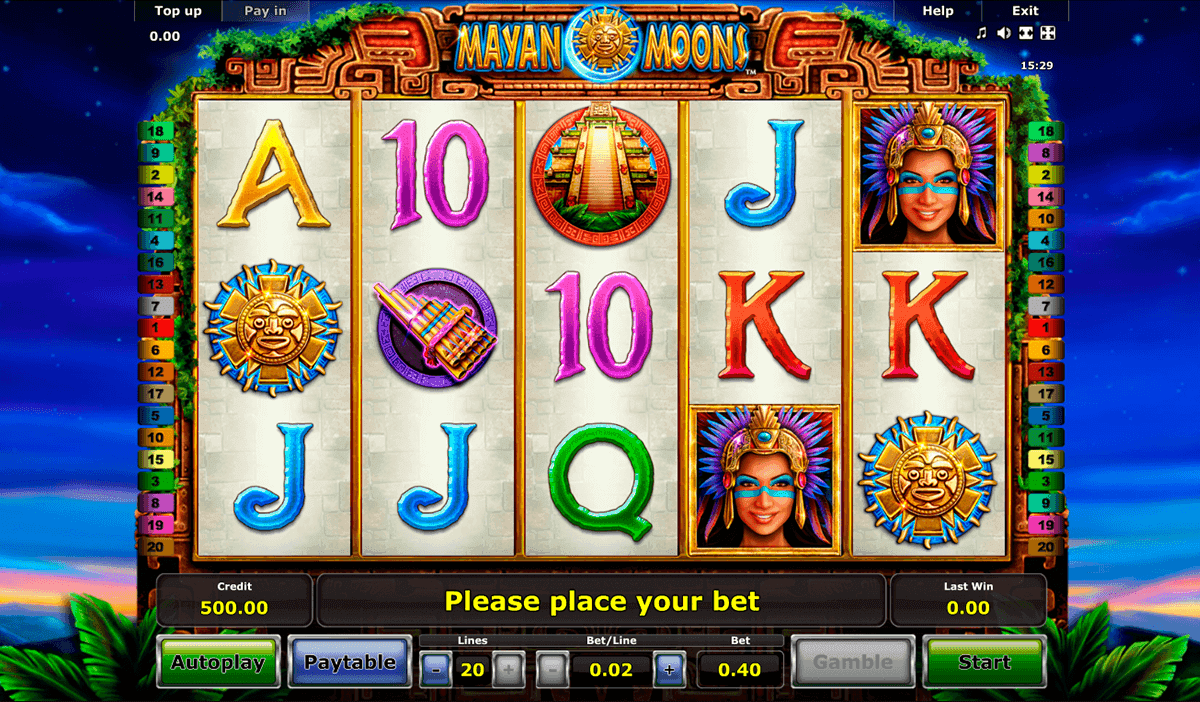 One of the most fascinating peoples who lived far before our modern times is the Mayan civilization. A people that even then was far ahead of its time. After the disappearance of this unique culture, we still don’t know very much about the Indio people, who were almost a world power for such a long period of time. The slot game developer Novoline has now dedicated an exciting online game to this bygone culture, where the player can dive into the everyday life of the Maya. This is a jungle adventure that shows the treasures and buildings of the Mayans.

With a little bit of luck and the right strategy, the player can bring the valuable treasures into his possession and fill the real money account abundantly. But beware, the search is more difficult than expected and not all that glitters is gold.

The design is somewhat reminiscent of the pyramid buildings of the ancient civilization and the temple building is enthroned on the top of the slot machine. What treasures will the player find in Mayan Moons by Novoline, or will he end up empty-handed? To find out, the player should play Mayan Moons for free without registration at the online casino.

Symbols in the game

Tips for the gameplay at Mayan Moons

In Mayan Moons online, the player is immersed in the almost forgotten world of the Mayan culture. These still have some treasures hidden, which can bring the player big profits. The game is played with 5 reels and a total of 20 paylines. The main symbol of the game is the Mayan Queen. In order to get any winnings credited to the account, at least 3 identical symbols must appear on a line and thus form winning combinations. You can play Mayan Moons for free without registration, but if you play it for real money, you should use higher stakes. Because in case of a win, it will be much higher than with the minimum bet. The minimum bet is 2 cents, while the maximum is 10 euros.

Mayan Moons by Novoline offers a very nice theme and matching design as well as a very good payout rate of over 95%. Besides that, winnings can even be raised enormously with a special feature. The player only needs to bring along a bit of luck and skill for this. An atmospheric sound can be heard in the background while playing, which condenses the atmosphere considerably, but does not become disturbing at any time. The easy handling is also convincing and due to the autoplay function, the player does not even have to do anything himself.

Mayan Moons by Novoline holds some free spins as a bonus for the player. With these, respectable winnings can be achieved. With a little bit of luck, you can get so many free spins that you don’t have to use any of your own funds for them, which in turn means no losses.

For example, if the moon appears three times, the player is already credited with 15 free spins. It becomes especially lucrative when the symbol of the lunar eclipse appears. This symbol remains for a few rounds and if the sun symbol falls on the lunar eclipse, there is a win that is 25 times the bet. The Mayan princess is considered the wild symbol, while the moon acts as the scatter symbol. With the latter, the player can win on any position.

The Novoline game is an action-packed game set in the time of the Mayans. As with all Novoline games, the rules are kept very simple and due to a moderate number of paylines, the player always has an optimal overview while playing. In the online casino you can play Mayan Moons for free in Fun mode. If the game can convince newcomers, their luck can be put to the test in real money mode. Maybe it will work out with the jackpot.