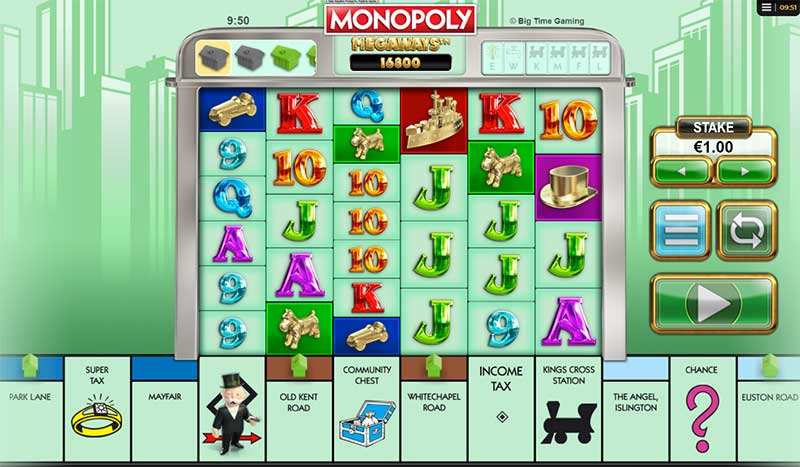 Are you or have you always been a fan of Monopoly? Do you like slots? Are you generally not averse to gambling? Then we have very good news for you: there is a new game that combines everything. We are talking about the slot game Monopoly Megaways from Big Time Gaming. As the name suggests, the board game plays a weighty role, although it is a slot. And because the combination of both is somehow not easy to manage, today it is our special pleasure to introduce Monopoly Megaways online. We will explain the rules of the game. We will reveal any tips and tricks to help you have the most fun possible. If there is a strategy that leads to higher winnings – we will reveal it.

We would like to give you a tip at the very beginning: you should take the chance and play Monopoly Megaways for free without registration. We have provided the demo version for you. Play for free and without registration. And try to recreate everything that we write about the slot in our review. Because the gameplay is not that easy to understand. Big Time Gaming has conjured up a pretty awesome game with lots of features. But as it happens. Monopoly Megaways is a bit confusing at first. That’s why we will try to explain the details calmly.

We’ll start with some important facts first. Big Time Gaming took some time before it came to the release of Monopoly Megaways. Finally, at the beginning of December 2019, the time had come. The Monopoly Megaways slot was allowed to start its triumphal procession in online casinos in Germany. And it promptly found favor with those who spent many evenings with the board game Monopoly. But this is not so much about the board game, but about the slot machine that was combined with the board game. The video slot comes with fabulous 6 reels and even more gigantic 7 visible rows. When each position is occupied by a single symbol, it results in an incredible 117,649 ways to win. Why? Because there are no predefined paylines, it just depends on finding the same symbol on adjacent reels.

For example, finding the car on reel 1, reel 2 AND reel 3 counts as a winning combination. If it appears on the next ones as well, the win increases. However, it is not enough if it appears on reels 1, 2 and 4. You must also always look carefully in Monopoly Megaways online, because symbols can also appear as expanded symbols (i.e. several lines high). But we will get to these details later in the gameplay. There is one important number that we have not mentioned so far: The RTP is 96.5%. So the payout ratio is quite high. The volatility is also high. This means that the winnings are spread over a wide range. Thus, very high winnings are also possible. Patience is required for the biggest winnings. This much we reveal already.

Monopoly Megaways consists of two parts: Slot and board game. These are the main characters you will find in the slot.

And how these two parts are connected to each other, you will find out in the gameplay. But before that, here’s another tip: you should definitely play Monopoly Megaways for free and try out the game. Without practice, the whole thing is hard to understand.

How to play Monopoly Megaways online?

Let’s start slowly and put one foot in front of the other. Once the game is loaded, you can get an idea of the elements you will find on the screen. Just click on the menu icon on the right side of the screen. Do you see the symbols of the game board and the slot of Monopoly Megaways online? That’s exactly what it’s all about from now on.

Before you spin the reels, you set your bet. This works the same in both variants – whether you play Monopoly Megaways for free or whether you wager real money doesn’t matter. Your bet can be between 0.20 euros and 40 euros per game. The important thing is: Do not change the stake within your game. Because possessions that you have accumulated with the stake of 1 euro per game will be forfeited if you suddenly increase to 2 euros per game.

When you spin the reels, you have two ways to do it: Autospin (that’s the double arrow symbol) or manual spin. The autospin will pay off sooner or later, because you need a lot of patience in Monopoly Megaways if you want to cash in on the really great wins. Below the reels you can see the squares of the Monopoly board drawn in. The game piece is always under reel 1.

The game piece can reach the fields mentioned above. Depending on the field the following happens:

The Monopoly logo appears on reels 2 to 6, often as a stacked symbol.  It substitutes for any other symbol and provides extra wins.

Unlike many other games, there is no scatter symbol in Monopoly Megaways online. There is no need for one either. The other features already add enough to the excitement.

When you get to “GO” or draw the right card on the “Chance” square, the Max Megaways feature is started. Small symbols are guaranteed to appear all over the grid. This allows for up to 117,649 winning combinations and thus the chance to win multiple times in a row and build houses on your own streets is especially high. By the way, playing Monopoly Megaways for free allows you to try it out and get to know this feature.

Already when starting the game, you learn that playing Monopoly Megaways gives you free spins where the multiplier and the number of free spins are theoretically unlimited. With such full-bodied promises, we naturally want to know this in detail and therefore describe the whole thing in particular detail. The bonus game consists of 8 free spins. And one thing in advance: it can take quite a while until you actually make it to the free spins. In our test, it took 300 spins until the time came. In return, the cash register then rang properly.

What does it take to start the bonus game of Monopoly Megaways? You need a street with 5 houses. Once you have that, the bonus game begins. It starts by giving you 8 free spins. In addition, you get another free spin for each station. As a starting multiplier you get x1 and for each utility field the factor increases by 1. If the game piece comes on a field with houses during the free spins of Monopoly Megaways, the multiplier increases by 1 for each house. Should you come on a utility field, then likewise. If you come across a train station, you will get 1 more free spins for each station you own. The houses are effectively exchanged for a multiplier. The stations and utility fields are also cashed in at the start of the bonus round. You can acquire them again at the end of the Free Spins. Free of charge, of course. You need to move the game piece as before.

Monopoly has thrilled us since time immemorial. The appeal of trading real estate, sprucing up your own neighborhoods and increasing their value, cashing in on your opponents – there’s something about it. Playing Monopoly Megaways gives us a very similar feeling. But more than that. It is a combination of video slot and Monopoly. The video slot constantly delivers more or less small winnings. But in truth, the board game’s character decides how big you cash out in the game online. If you were smart, you took our tip to heart. What was the tip? Oh yes, play Monopoly Megaways for free without registration. Have you also come to the conclusion that Big Time Gaming has really done amazing things with the evergreen Monopoly? The symbols are kept simple, the sound is pleasant, not very intrusive and certainly not exciting. It’s just nice background music.

The small winnings that you get over and over again don’t make it. This will quickly become clear to the player when trying Monopoly Megaways slot. Of course. There were also very isolated rounds in our test that delivered 100 times the bet. But that was one game out of 500. Roughly estimated at least. Basically, you eagerly await the bonus game. You keep hoping that winning combinations will appear at least 3 times within a game round. And that you land on a street that can be built on. The Max Megaways feature sometimes helps. But sometimes it doesn’t. Monopoly Megaways is a real game of patience in that respect.

In summary: Here you will find an incredible amount of winning opportunities, a very fascinating gameplay and just an all-around clever game concept. The fact that the scatter is missing is not noticeable. Only one thing is important – hopefully this has not been lost in the abundance of information. While in other games you should often vary the bet in order to make the best use of any free spins, you should not change the bet in Monopoly Megaways. Then you will always switch to a new, blank playing field. And that is not conducive when it comes to reaching the bonus game.

By the way, it is interesting how shamelessly they exploit our curiosity. Have you noticed that at the top of the game field it is always displayed in real time how many winning opportunities there always are? Crazy what numbers you are confronted with when the displayed grid is as large as in this slot! We would like to see more games in this format!

If you are curious about games, you should take the opportunity and play various slot machines for free without registration with us. Get inspired and test games that you have never played in online casinos. Get to know them at your leisure. It costs nothing but a little time. And that is usually sweetened by the gaming pleasure anyway. Time flies when playing a good game. In the blink of an eye, the hours have flown by. And what remains? The entertainment and the learned knowledge about a new game.

How to play Monopoly Megaways online for real money

Admittedly, time flies insanely fast when playing Monopoly Megaways for free. But somehow we Germans have the urge to get more out of it than just playing for free. We want to win real money when we have the chance. And that means we also have to deposit and wager real money. Unless of course we secure free spins without a deposit. You may also know these under the keyword no deposit bonus or registration bonus. You then get free spins for various slot machines like Monopoly Megaways in the casino. These game rounds do not cost a cent, but can bring real profits. Luck provided. Be on the lookout for this type of bonus. Our lists will help you find them.