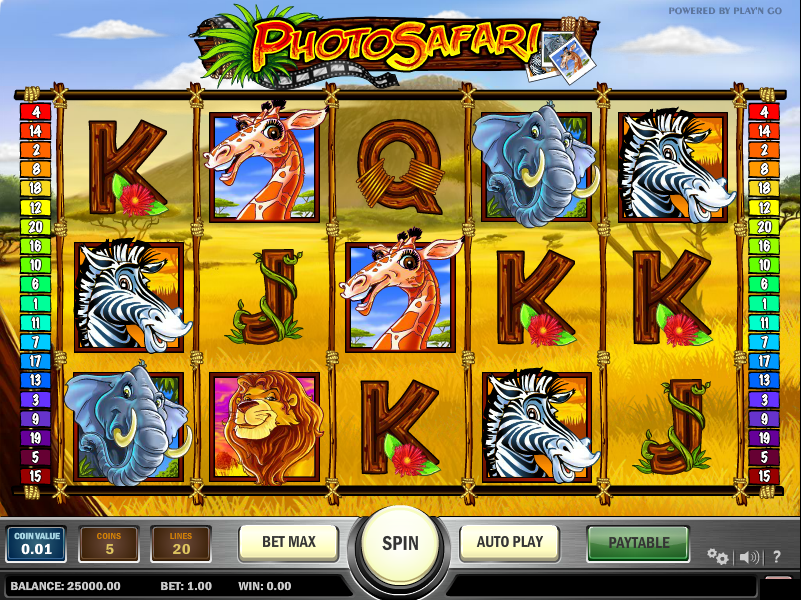 Game provider Play’n Go now offers all slot fans the opportunity to go on an exciting photo safari, at least online. In the slot of the same name, it is actually all about taking photos of the various animals during the safari tour, among other things. These, in addition to any bonus and standard symbols, can be found as funny cartoon motifs on the reels of the slot. Photo Safari by Play’n Go can score with the following features:

The main characters are of course the most important characters of the game. This primarily means the scatter symbol in the form of a rolling film for the camera, the camera itself as a bonus symbol and the wild symbol. In addition, there are the following animals as premium symbols with higher payout value and the usual card game symbols:

To get a win during the normal games, you need at least three of the same symbols. Also, winning combinations can only be formed on the up to 20 selectable left to right paylines.

How to play Photo Safari online: Operation of the slot and bonus games

Photo Safari, like almost all slot machines from Play’n Go, is characterized by its simple operation and quickly learnable rules. Already after the first call, even rather inexperienced players should find their way intuitively with the game. Game rounds can be started either manually via the spin button or with the auto function. The auto function can play up to 100 game rounds automatically. In addition, the player can set various conditions and limits before starting the auto-rounds.

Before each spin or before starting the auto-spins, the player determines his desired bet. This is done via a coin value, the number of coins and the number of paylines played. Stakes can range from 1 cent to 100 euros per spin. Information about the game itself, the symbols and bonus rounds, and the paytable can be accessed via the info icon. Directly below it, there is also the main menu, which combines almost all important functions. Last but not least, next to the menu icon, there are the sound controls, the turbo spin controls and the help pages for the slot.

Photo Safari players can enjoy several features at once. The wild symbols not only grant a high win, but can substitute for all other standard symbols to create winning lines. Meanwhile, the two bonus symbols (roll film and camera) trigger the following functions:

Photo Safari is an all in all very successful slot game. The slot has a whole range of functions and is also technically very professionally implemented. If you want to get an idea of the game yourself without any risk, you can play Photo Safari for free thanks to a demo version and thus test the slot extensively. After all, the test version that Play’n Go makes available to its partners and casinos is all about play money. A customer account or credit is not a prerequisite and you can play Photo Safari for free.

This is ultimately also the best and therefore most recommendable way to get to grips with the rules and the described functions of the slot. Therefore, you should take the opportunity and play the slot for free and without registration.

Photo Safari is ultimately a classic game of chance. Therefore, tips and tricks to influence one’s luck in any way do not really exist. However, the financial risk is quite limited, considering the low minimum stake of only 1 cent per round. Therefore, even inexperienced players can simply try their luck and go on a photo safari. Especially since there are also quite a few online casinos that offer a casino bonus without deposit. The starting credit received in this way is of course strictly speaking also suitable for playing a few rounds of Photo Safari for free.