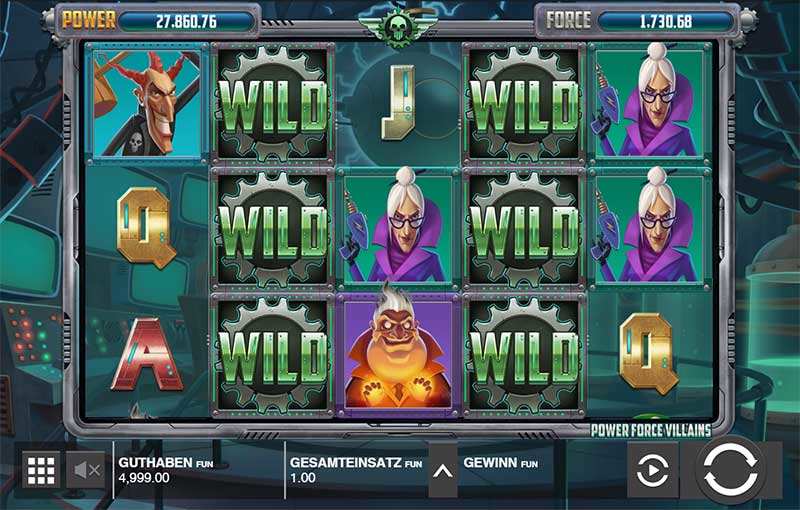 Power Force Villains by Push Gaming is the perfect slot for those who have always been attracted to evil villains rather than superheroes! Five evil villains are working together in the lab on a grand plan that will provide plenty of fame and glory. With a little luck, one of the two integrated progressive jackpots can even be won, which would make the mission more than successful in Power Force Villains. Apart from this big bonus, the online slot also has plenty of other good features, such as big 3×3 symbols, free spins, super spins and much more.

Learn more about the rules of the game now and find out how to play Power Force Villains for free without registration!

Get to the bottom of the science of evil in Power Force Villains online.

Push Gaming gives away pretty quickly that something evil is afoot in Power Force Villains, based on the mysteriously chosen background melody and the villain symbols. Players are thrown into the setting of a science lab, which is equipped with high-tech gadgets and has certainly experienced an explosion or two. On the five reels and three rows, the five evil villains introduce themselves:

The characters are considered as the main symbols and are complemented by some card deck symbols (A, K, Q, J). In addition, various bonus symbols can also appear on the reels.

Power Force Villains slot consists of a 5×3 reel grid and is equipped with 25 fixed paylines. So, before you can start playing, all you have to do is set a bet. You can bet from 0.25 to 50 coins or simply decide to play Power Force Villains for free. Wins are generated by winning combinations of three to five identical symbols, which must land on one of the paylines. Depending on the amount of the bet, the payouts will also be higher or lower. These can be viewed in the paytable.

The maximum win from symbol combinations is 500 coins, which is paid out when either the strong villain or the wild symbol appears five times in a winning combination.

One of the beneficial features of playing Power Force Villains is that symbol blocks of 3×3 symbols can appear on the reels. They appear as one big symbol on the reel grid, but count as nine individual symbols. This can result in high winning combinations!

Fans of bonus features will be immensely pleased when playing Power Force Villains, because Push Gaming certainly didn’t skimp on this end. There are a total of four bonus symbols that bring with them different features. A silver and a gold skull symbol are considered jackpot triggers, with the silver one appearing only in the base game and the gold one during the free spins or super spins. They both land only on reels 1, 3 and 5 and trigger the jackpot when three of them land in any positions. The silver skull leads to the FORCE jackpot and the golden one leads to the POWER jackpot. The current amounts are displayed in the top right and left corners of the reels.

While this bonus depends on a lot of luck, other bonus symbols can show up more often. The Power Force Villains Wild symbol is represented by a gear with the word “Wild” written on it. This is considered a wild symbol and, apart from the other bonus symbols, it can substitute for all others and lead to more winning combinations. Only during the super spins it will not appear.

The free super spins and free spins can be triggered by the “Villains Take Over” feature. This occurs when the bonus symbol – often known as the scatter symbol – lands on reel 2, 3 or 4. It is represented by an astronomical symbol and awards 1, 2 or 3 super spins or free spins respectively.

Free spins are always welcome, especially if they have additional profitable features like in Power Force Villains. During the free spins, one of the low-paying card deck symbols disappears in ascending order after each spin until there are none left. On the super spins, one more is added by only villains appearing on reels 2, 3 and 4, which are connected.

Without any registration, German users can play Power Force Villains for free directly on our site and get a portion of free entertainment. This option is suitable not only to play risk-free, but also to learn tricks for the game and get to know the rules first. If you find that Power Force Villains is not to your liking after all, you can also play many other slot games for free without registration!

If you are looking for a special thrill and want the chance to collect real money winnings, you can play Power Force Villains for real money at an online casino. Look for a suitable, reputable online casino and create a player account to be able to use the real money slots. Our tip is to look for a welcome bonus for new customers when searching for a suitable gaming portal and compare them with each other.