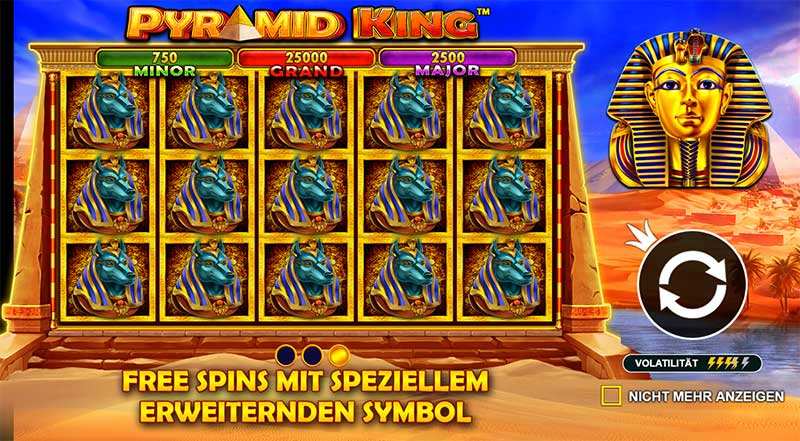 Pyramid King by Pragmatic Play is a slot with the popular Egypt theme. The release is not far behind, yet there are already numerous casinos where Pyramid King is available online. Is the slot game worth a try? Are there any tips and tricks for more winning combinations on the reels? We introduce Pyramid King with the most important symbols and features and portray the gameplay. We also explain how anyone can play Pyramid King for free and even win real money.

What is Pyramid King slot about?

If you love slots with an ancient Egyptian theme, you can play Pyramid King and find an alternative to the really big titles such as Book of Dead. The reels spin against a majestic background: the sun wakes up over a fascinating landscape with the banks of the Nile, pyramids and a variety of other ancient buildings. The atmosphere is accompanied by an atmospheric sound reminiscent of a mixture of snake charming and 1,001 Nights.

Pragmatic Play has equipped Pyramid King with a medium to high volatility – at least that’s how the manufacturer presents it. However, the maximum win turns out to be manageable with 2,500 times the stake. The payout ratio (Return to Player, RTP) is 96.5% according to Pragmatic Play. Players wager €0.25 to €125 per spin. What happens to the stakes is decided on five reels and three rows. There are 25 paylines.

Technically, Pyramid King is rather unobtrusive. The modern game is based on Javascript and HTML5. This is one of the reasons why it can be played on smartphones and tablets as well as on the classic desktop PC. Pyramid King is available online in numerous casinos.

Important basic data at a glance:

Symbols, features and the jackpots at Pyramid King

First of all, a look at the important main symbols in Pyramid King slot. The most valuable symbol in the base game is Anubis. The dog god brings 20 times the bet when it appears five times. Other symbols include the green brooch, the golden snake and the ruby-studded cross. There are also the card symbols A, K, Q and J. These card symbols act as consolation prizes and bring a maximum of double the bet.

During the free spins, there are more free spins to be won. This requires three or more bonus symbols. Then there are ten free spins again. These can theoretically be triggered any number of times.

The money symbol is very important for the gameplay in Pyramid King. This symbol appears on all reels. It takes on any value on each spin. If there are six or more money symbols, a re-spin is triggered.

All symbols except the money symbols disappear. Three re-spins start the game. All money symbols that appear after a re-spin remain until the end of the feature. The number of re-spins is always reset to three when at least one money symbol appears. This continues until either all positions on the screen are filled with the money symbol or the re-spins end. At the end, the values of all money symbols are added up and the total amount is paid out. This feature is also available during the free spins.

Is there any particular strategy for winning more? Of course not. No matter whether you play in a German online casino or with a provider outside of Germany: Only a neutral random number generator decides on victory and defeat.

Those who do not want to leave any personal data can use our slot library. There visitors can play slot machines for free without registration. Playing Pyramid King for free is possible as well as testing other slots. Not only Pyramid King is available online in the library, but there are also hundreds of other slots with various themes such as animals, celebrities, sports, fantasy, medieval, Egypt, Wild West and more.

Play Pyramid King for free and win real money with a casino bonus.

An alternative to the demo are the free bonuses of the casinos. With these, anyone can play Pyramid King for free and win real money. There are different types of bonuses. A widespread variant are free spins without deposit. Here, the casino provides a free spins quota. This can also be used for Pyramid King. The winnings from the free spins are credited as bonus money. After fulfilling a turnover requirement, this bonus money can be paid out.

Another possibility are bonuses with free credits. This is a kind of starting credit. This can be used for Pyramid King or any other games. With a free bonus, you can thus play Pyramid King at the expense of the casino – however, the winnings are also credited here as bonus money. It is also a prerequisite that Pyramid King is available online at the respective casino. Due to the turnover requirement, a somewhat longer streak of luck is necessary. First of all, winnings must be achieved with the bonus. Subsequently, these must be held over the turnover requirement at least.

However, Pyramid King free play without registration does not work with a free bonus balance (and also with free spins without deposit). Since winnings in real money can accrue in this variant, the data of the possible winner must be submitted even before the first spin. Therefore, registration is required.