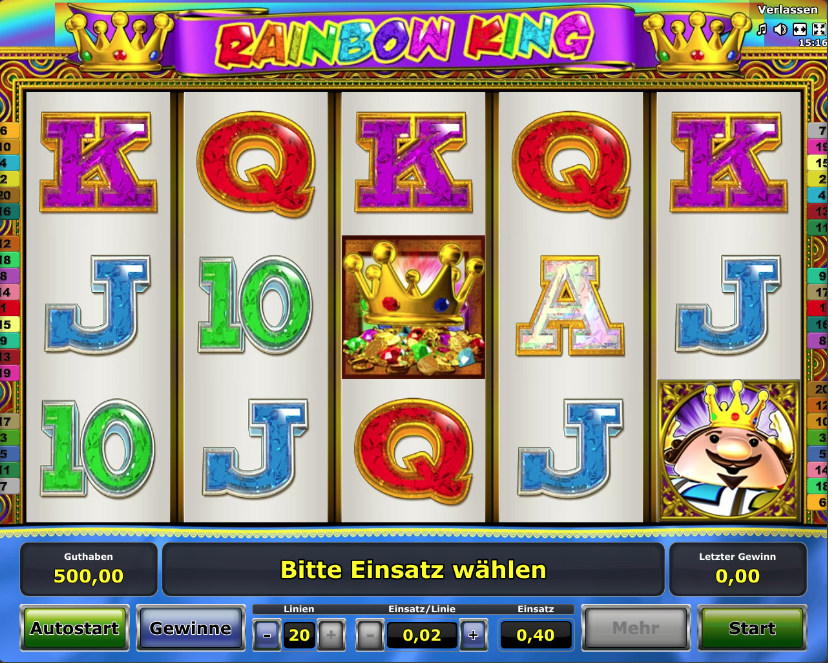 Rainbow King slot machine is another masterpiece from Novoline. The slot really lives up to its name, because the player dives into a colorful and exciting world. Of course, many players already know it from the arcades or casinos. But now this machine is also available as a free slot and whoever wants can play now. Surely you will soon feel the desire to also dare to play for real money, because with Rainbow King the player has a slot in front of him that is packed with great features. In addition, you will also enjoy the smooth gameplay, great animations, colorful graphics and fantastic sounds. This game is similar to the Ultra Hot Deluxe slot machine.

But first, some important key data about the slot machine Rainbow King:

The games from the house of Novoline can be played on the Internet not long ago. But now it is even possible to play these slot games for free and in German. You can also play Rainbow King online.

As already mentioned, Rainbow King is a game with five reels and 20 paylines.

The great thing about this game is the three bonus games, which not only offer great payouts, but also varied gameplay. On the reels you can find the well-known symbols A, K, Q, J and 10. The Wild symbol completes a winning combination and substitutes for the symbols. except for the Rainbow King, the Crown and the Castle. The best wins are promised by the bag of money on an active payline.

The bonus games of the casino

This bonus game becomes active when three crowns appear on the second, third and fourth reels. Suddenly you see twelve crowns in front of you and the player must then choose one. Among them is a multiplier between 50x and 500x. The winnings are immediately credited to the account.

This bonus round is activated when three or more castles appear on the reels. Again, you have to click on one of the castles to unlock the multiplier hidden underneath. It can be a double multiplier, but it can also be a 500x multiplier.

This is a particularly entertaining bonus game, because when three kings appear, the player is directed to a new monitor. There, a game board and a dice can be seen. The player rolls the dice by pressing the start button, and the game piece moves across the squares where a win can be seen. This bonus round is over when you land on a “Take the Money” square.

The game of bonus rounds is especially fun. Those who would like to get to know these great features should simply play Rainbow King for free. Fortunately, today it is possible to play the best slot machines available on the Internet for free without registration. Playing Rainbow King online for free without registration is very similar to the slot machines you know from the arcade. This is true not only for the gameplay, the crisp graphics and the great sounds, but also for the winnings; only that you can also play online for free.

Rainbow King is a slot that you should take a closer look at, if only because of the bonus games. Since you can get the reels spinning with as little as €0.40, Rainbow King is suitable for any budget. Even the high roller will enjoy this game. Rainbow King is a great slot for all fans of Novoline games.

If you don’t know this slot yet, you should change that quickly! The Rainbow King is very generous and gives its players great winnings that should not be missed! Just like the Sizzling Hot Deluxe slot games, you can play the slot without registration and start gambling right away. And here you can even try Magic Mirror slot machine for free without taking any financial risks!