Ring of Odin by Play’n Go 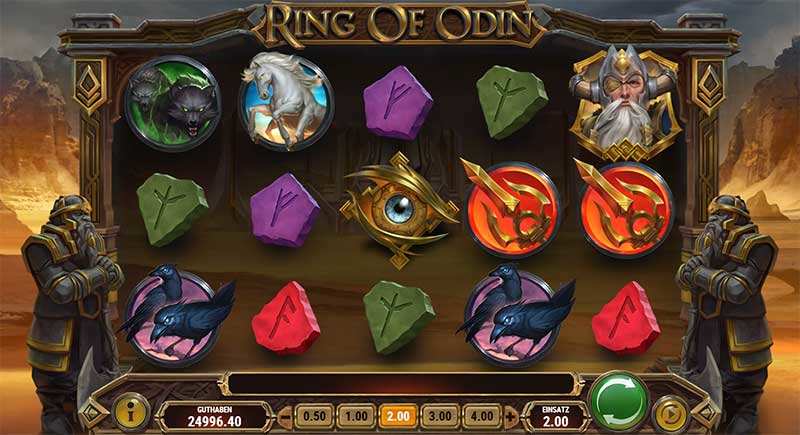 By now, even the mainstream audience should probably be familiar with the legend surrounding Odin, Thor and Asgard. Because since the Marvel adaptation of the comic Thor, you can find the originally ancient Germanic saga of the Allfather, who rules over the nine worlds, in all media. Ring of Odin, Odin’s ring in German, turns this legend into a slot of its own.

But if you expect Chris Hemsworth, you might be disappointed. Here, far more reference is made to the actual saga than to the Hollywood movie, including the two ravens, the seeing eye or the eight-legged horse, which are motifs here in the slot game. This may presumably be due to the saga’s origins in Northern Europe, place of origin also for the makers behind the slot, Play’n GO, who come from Sweden and to whom the theme should therefore be even more familiar than to players in Germany.

As you would expect when playing Ring of Odin for free for the first time, you hear a triumphant melody right at the start, which is appropriate for the warrior ruler and is meant to set the mood for the gloomy world. Ring of Odin Online has a classic 5×3 reel system with various special symbols with their own functions. All the available characters are completely in the theme of the Norse sagas. Thus, Odin’s finger jewelry Draupnir can be found here, which takes a special titled place among the symbols. When you play Ring of Odin for free, you can see the partly animated symbols in action.

Next to them are the mentioned two ravens of Odin, Hugin and Munin, as well as his wolves, Geri and Freki. In addition, the eye of Odin, which sees into the future, should not be missing, which has an additional function in the Ring of Odin slot. These and other symbols are framed by various rune-shaped stones.

The playing field of the game by Play’n GO is flanked by two stone warriors, somewhat reminiscent of the dwarves in The Lord of the Rings, and in the background you can see a barren, yellowish lunar landscape. Overall, when you play Ring of Odin for free without registration, you will experience a high-quality slot machine designed down to the smallest detail.

Here are the features of the title at a glance:

How to play Ring of Odin

To be ready for Ring of Odin, you don’t have to do much. Because first of all, we provide you with the game for free and secondly, it is very easy to understand. The goal is to spin one of the winning combinations to be formed on the ten paylines of the online game. You place a bet on this at the beginning. When you play Ring of Odin for free with us, you can do so without betting any real money at first. The bet can range from 0.10 to 100 currency units.

The symbols in Ring of Odin Online

If you play Ring of Odin for free without registration, you can also better understand the characters in the game. Of course, the most valuable main symbol is the god himself, who can simultaneously substitute for all other characters and symbols as a wild symbol, except for the eye, which acts as a scatter symbol and therefore triggers various free spins. Here are all the symbols by value and function in Ring of Odin:

In addition, of course, there is the titular Ring of Odin, Draupnir, which can trigger re-spins in this slot. The eye, on the other hand, which only appears on the odd-numbered reels, triggers four free spins as a scatter symbol.

While playing Ring of Odin for free, you can also see multipliers, but they only appear in the game every now and then. This is because the golden rings with “+1” in the center in front of a fireball only appear when the scatter (the eye) appears in the free spins mode. Depending on the number on the playing field, you increase the winnings many times. It is a rare bonus, but when it occurs, it can bring in high winnings, provided you have made an equally high bet.

Another special feature, as mentioned earlier, is Odin’s finger jewelry itself, which can randomly appear in the center of the playfield on any spin. This will get you up to nine Draupnir re-spins.

When you play Ring of Odin for free, the bets displayed are fictitious. When playing Ring of Odin with real money, you will probably use different amounts at your chosen casino. Of course, which currency you choose to use will also play a role.

Depending on the bet, the winnings on the individual symbols will increase. For example, if you bet only 0.10 currency units, you will receive 3 currency units for the main symbol, the Allfather. If you bet 100 currency units, on the other hand, you would win 3,000 currency units. Thus, the slot machine is purely technically equipped for small amounts and large sums. Players with small and large budgets are equally welcome.

Among the tips and tricks of the pros is that it is smart to practice with a demo version when playing Ring of Odin online. Because even though you can’t change the rules of Ring of Odin – it is, after all, a game of chance that produces results at random – you can better estimate your strategy for the first risk game in terms of stakes.

It is easier than you think. Because Ring of Odin by Play’n GO is quite easy to understand, despite its multiple symbols and functions. However, in order to get a good head start in the game practice, you should play this slot machine for free without registration. This is possible on our portal, because we present you this and other Play’n GO games for free, even without registration. So feel free to test it out!

If you can’t wait to test your new skills under real conditions, you should dare to play Ring of Odin for real money in an online casino. For this purpose, various arcades come into question, because Ring of Odin enjoys some popularity. We have already gathered the best among them, which come up with a valid gambling license and further measures for security. And in addition, you will find other promotions like no deposit free spins or other no deposit or welcome bonuses that you can use for your real money play to benefit from further advantages.