Rise of Dead by Play’n Go 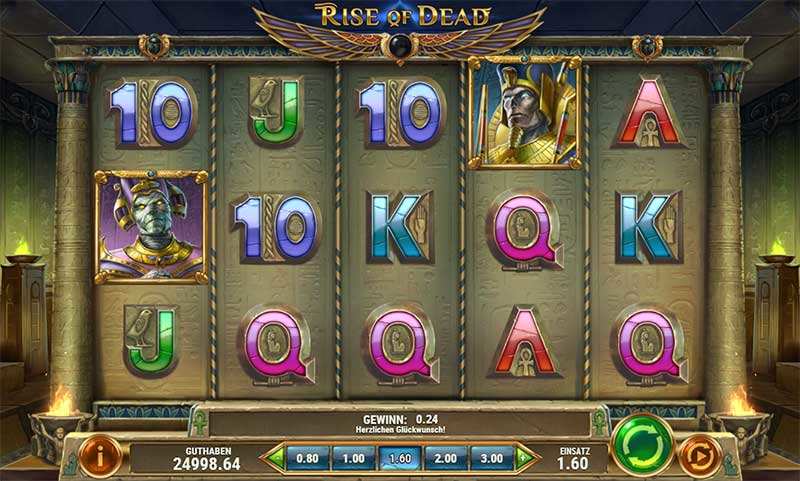 One of the most popular themes of slot games in online casinos is ancient Egypt. In the meantime, an almost unmanageable number of slot machines with pharaohs, adventurers, beetles and Egyptian gods have accumulated in casinos, so it is not only players in Germany who find it difficult to choose a game with this theme. However, we can reassure you, our today’s test candidate will make your decision easier, not harder.

There are online slots with an Egyptian theme and then there is Rise of Dead from Play’n GO. Rise of Dead online picks up the spooky side of this era and brings it to our home. When you play Rise of Dead, nerves of steel are indeed required. The way to the reels leads you deep into the catacombs, where the deceased pharaohs eke out their existence in their coffins. So the trick to playing is also not to let the mummies scare you. Probably, that’s why it would be a good idea to play Rise of Dead for free without registration at the beginning. Get your strategy right, because now it’s off to the dark side of this age.

The Rise of Dead slot at a glance

Play’n GO has created a fantastic game atmosphere that brings out the creepy and gloomy theme brilliantly. The soundtrack, for example, will literally make your blood run cold, well before you’ve even taken your first spin. In addition, there are graphic animations that make the mummies come to life while you play Rise of Dead. The playing field of the brave German players is located in a tomb reserved only for the deceased pharaohs. So here you should be careful, even when playing Rise of Dead for free.

While the stone torches in the background provide just enough light to see the Egyptian characters on the walls, two more stone torches right next to the playing field will help you decipher the main characters and possible winning combinations. Besides this spooky atmosphere, there are of course bonus features for the German player to discover in Rise of Dead. If you were hoping that these functions would be a bit more cheerful, then unfortunately we have to disappoint you. However, we can give you the hint that your courage might be rewarded, because the prospects for fat winnings could hardly be better.

The golden beetle is the wild symbol of the Rise of Dead slot. Thanks to him, strategies can become completely unnecessary, because he can replace all motifs, except for the scatter symbol. In addition, the golden beetle itself can form a winning combination if at least two of these motifs land on a winning line.

Play’n GO has equipped Rise of Dead online with a very special feature that can help you win handsome winnings even in the base game. In the Mega Stack Feature, a symbol is randomly selected to occupy twelve consecutive spaces on a reel.

The Gift of the Gods Feature

The mummies of the pharaohs seem to be gracious to us at least once in a while, and not necessarily only when we play Rise of Dead for free. The Gift of the Gods feature is also activated randomly and exclusively during the base game. This is where things get really exciting, as reels one, three and five will be populated with the same symbol, thanks to the powers of the gods. Next, these three reels are stopped in their positions, while reels two and four start moving normally.

During the Free Spins, you can marvel not only at wins, but also at a very specific animation. The free spins are activated when three scatter symbols land. Now the mummies become really active and you should watch this very closely, for example, by playing Rise of Dead for free without registration. The playing field will now be bathed in a bright blue and you will receive ten free spins. If another scroll lands during the spins, you will get two additional spins, if two more scrolls land you will get four additional spins and if even three more scrolls land, you will be credited with ten additional spins. The number of free spins you can win in Rise of Dead is UNLIMITED!

Your chances of winning are increased even further for the free spins round. All the lower value symbols are arranged on the reels in a mega stack consisting of eight designs. The three spooky pharaohs expand and stack to fill the entire reel. However, the gods know when to help you win, as they only expand when there is a chance to win.

But Rise of Dead’s wild symbol also gets a free boost for the duration of the free spins. If it lands during this bonus round, then it will also appear as a Mega Stack on a reel. The Mega Stack of the Wild symbol consists of six to seven symbols.

How to play Rise of Dead online

Play’n GO has equipped Rise of Dead with numerous configuration options that allow us to focus exclusively on playing. A great advantage is that you don’t have to spend a lot of time searching for the respective options. For example, if we start playing Rise of Dead for free, we can already get a first impression of the logically structured arrangement of setting options. For example, if the sound is too creepy for you, you can deactivate the game sounds by clicking on the speaker in the lower left corner.

One of the most important settings is the choice of the bet. You can determine your bet amount directly under the reels. Rise of Dead can be played with as little as €0.20, and there are numerous betting options available up to the maximum bet of €100. Since the bet level has a significant influence on the amount of the possible winnings, it is recommended to experiment a bit with the bet level. Of course, you can play Rise of Dead for free without any risk. Last but not least, you only have to set the autoplay function according to your preferences. Among other things, you can set a number of spins or subject the spins to a win or loss limit.

The rules of the game

Now we have discovered one more thing that Rise of Dead has in common with most of the other Egyptian slots. Namely, the rules hardly differ from those of other slots in the casino. The slot game has 20 fixed paylines even in the free version. All 20 paylines start on the left reel and move to the right across the playing field. Evaluations are also made in this direction as soon as the reels come to a standstill. However, keep in mind that only the highest win is ever paid out. For a winning combination with the lower-value motifs, at least three matching motifs must land on a payline. In turn, to record a win with one of the major symbols, only two matching symbols are needed on a payline.

The slot machine is played with ten motifs. Thus, as a new player, you will quickly get used to the motifs and their function or their winning combinations. To make it even easier for you to get started, we have created the following symbol overview for you:

Conclusion and play Rise of Dead for free

This slot game is interesting not only for players who are passionate about Egyptian slots. With its exquisite graphics and fantastic animations, Rise of Dead provides gaming pleasure and entertainment at an absolute top level. Creating a spooky and creepy version of a slot whose theme already exists so often in the online casino makes all the difference and ensures that Rise of Dead clearly stands out from its competitors. If you want to venture into the catacombs of Egypt with this slot, where the mummies of ancient Egyptian kings are up to mischief, then you should be aware, however, that this is a highly volatile venture. However, the odds are so good with an RTP of 94.54% that it could pay off to take on the mummies. In the best case scenario, you could eventually secure the highest possible win of your bet x5,000!

Fantastic are undoubtedly the bonus features, with them even the base game becomes an exciting and varied affair. With the Gift of the Gods feature and the Mega Stack feature, which you will encounter again even during the free spins, the account balance can be gilded with a bit of luck. We are of the opinion that you absolutely have to try this slot. That’s why you can play the slot for free without registration here with us.

You think it’s time to take on the mummies with real money? Then you can finish the last spins playing for free without registration. Sign up at an online casino and make your first deposit to take on the challenge of mummies with real money. Take advantage of the welcome bonus that casinos provide to their newly registered players. You might even start your journey to Egypt with no deposit free spins.