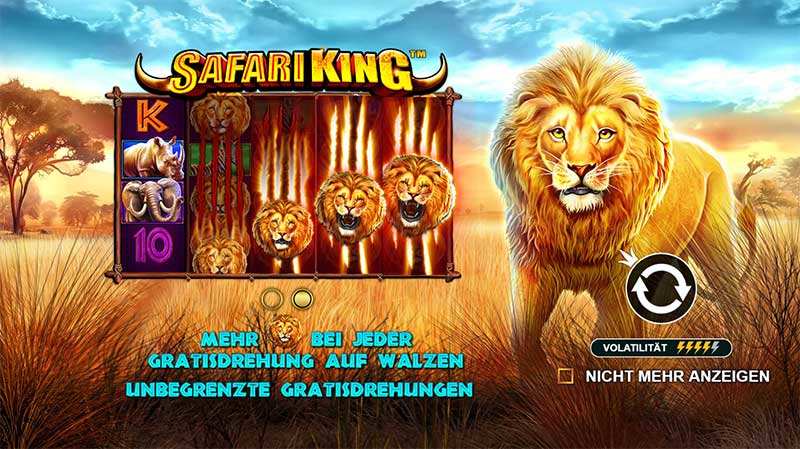 Lion tamers and all those who want to become such, pay attention. There is a slot machine that you should like. Namely, it is Safari King by Pragmatic Play. The name says it all. Here, everything literally revolves around the animals of a safari. Pragmatic Play has gone to great lengths to live up to the motto. The result is a game that has no need to hide on the online games market. And Pragmatic Play has long stood up to comparison with the big names in casino games development. Safari King is a good example of this.

Safari King slot appeared in February 2019 in online casinos in the German-speaking world and since then it is impossible to imagine life without it. Why Safari King is fun to play and you would prefer not to stop playing, read here. We also explain the rules of the slot, do not spare tips and tricks so that you can find a strategy that will lead you to wins. If you want, you can get a taste and play Safari King for free with us without registration. We offer you the demo version for free and without registration. This is a fine free opportunity to get acquainted with the subtleties and features of the video slot. Therefore, we would like to invite you. Come and play Safari King for free with us.

We’ll first take a look at some sober facts about the Safari King slot game. The game, as already mentioned, is a video slot with 5 reels. So, 4 visible rows reveal a grid of 5×4 squares. Over this grid, 50 paylines have been predefined in Safari King. Combining the number of 13 different main characters with 50 paylines and a varied gameplay, the RTP in the case is 96.49%. And these are the symbols you will see in Safari King:

How to play Safari King online?

First of all, once again our invitation: you can play Safari King for free and get to know it at your leisure. Every game in the online casino starts with setting the bet. Safari King online is no different. The bet is controlled by the adjusting screws of the number of coins per payline, the coin value or the total bet. Values between 0.50 and 250 euros are possible. The reels in Safari King can be spun either by single spin (mouse click or space bar) or by using the autoplay button. If you like, you can also stop the reels yourself. This is already known from other Pragmatic Play games. Winning combinations are displayed immediately. The most valuable symbols already yield winnings in Safari King online if they appear only twice next to each other on a payline. For the others, it takes at least three identical characters. By the way, the attentive reader will not have missed it: there is no scatter symbol in Safari King, but there is a bonus symbol. And so to the features.

The lion is the logical wild symbol in Safari King. It substitutes for all other symbols except the Bonus symbol. It appears on reels 2, 3, 4 and 5, where it can be stacked, as it is called in the jargon. See for yourself when you play Safari King for free.

The bonus symbol of Safari King is easy to recognize. It is simply called “Bonus.” It appears on reels 1, 3 and 5 and if you see it on these three reels, you will get four times the bet as an instant win. Plus 8 free spins for Safari King online, with the number of wild symbols dynamically increasing by one at a time. The existing ones stay in place as sticky wilds. After 8 free spins, you will have at least 8 Wilds on the grid in total – and accordingly many wins. If you spin another bonus symbol within the free spins feature, you get another free spin for Safari King on top. You should play Safari King for free to experience it for yourself.

We had already anticipated it at the beginning: Safari King online is a game for lion tamers and all those who want to become one. Here, beautiful animal symbols combine with good sound and great features. Safari King free to play without registration is what we can offer at this point. If you are not a friend of wild animals, which do not exist in Germany, you are welcome to play other slot machines for free without registration. There is something for everyone. Whether it is the Safari King slot or another slot, it does not matter.

How to play Safari King online for real money

The nice thing about online casinos is that you find the opportunity to play for real money, if you like. The same is true for playing Safari King. If you are clever, you can get free spins without deposit in one of the best online casinos, which we also like to call a registration bonus. This allows you to play Safari King for free for at least a while and at the same time have the prospect of real winnings. You kill two birds with one stone. Ingenious, isn’t it?