Santa vs Rudolf by NetEnt 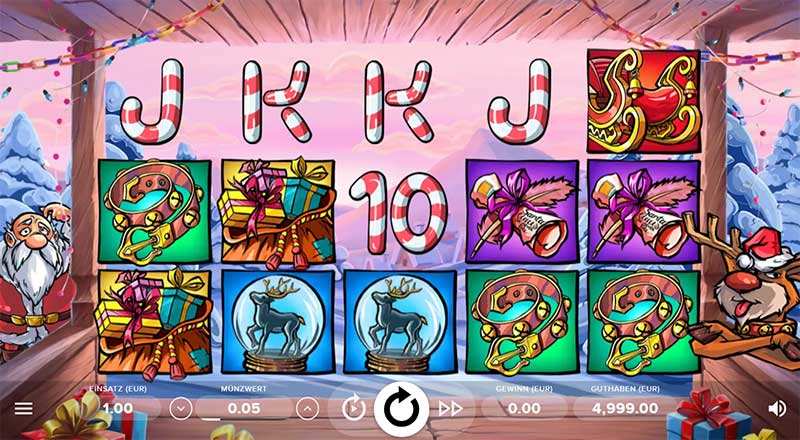 For those who have had enough of all the Christmas classics, Santa vs Rudolf is a new entertaining story that evokes Christmas spirit and offers absolutely strong entertainment. NetEnt has traditionally developed a new slot for the Christmas season, which is very appealingly designed in a funny comic style and scores with many bonus features. Players are challenged to save Christmas in the Santa vs Rudolf game, because just before Santa’s departure, his hat was stolen by the naughty reindeer. Will you manage to find a strategy in time to recover the cap, or will there be no presents this year?

Start your attempt now by playing Santa vs Rudolf for free without registration here with us!

Santa vs Rudolf: It’s all happening at the North Pole!

This year Santa Claus is requested for your support. Without his hat, which was stolen from the North Pole by the naughty reindeer Rudolf, he can’t set out to distribute presents all over the world. This entertaining story and the great battle between the two characters is grandly presented with unique graphics and sound effects in Santa vs Rudolf by NetEnt. In the snowy environment at the North Pole, a 5×3 reel field spreads out, offering players the chance to save Christmas.

NetEnt has designed the game in a cartoon style and has chosen the game symbols to match the theme. Besides the naughty reindeer and the desperate, angry Santa Claus, the following symbols and main characters show up on the reels:

The background music when playing Santa vs Rudolf gives the machine a wintry and at the same time amusing atmosphere.

This is how Santa vs Rudolf is played online

The mission to join Santa in the hunt to save Christmas Eve is a great incentive to play Santa vs Rudolf online. You can help in good conscience by playing Santa vs Rudolf for free or by wagering real money and catching a little Christmas extra yourself with a little luck. You can already play with a bet of 0.20 euros per spin. A maximum of 100 euros can be bet. The setting is made via the bet level (1 to 10) and the coin value (0.01 euros to 1 euro).

The Santa vs Rudolf slot offers five reels and three rows. On these, the many different Christmas symbols spin, which in combination can lead to wins. At least three identical symbols on one of the 20 fixed paylines are necessary for a winning combination to occur. However, as wild symbols, both the naughty reindeer and Santa Claus can also help create combinations.

Who would want to go out without presents at Christmas? To make sure that doesn’t happen, NetEnt has included a whole bunch of bonus features in the Santa vs Rudolf slot that will help get Rudolf on the scent. The slot game includes Walking Wilds, Respins, Free Spins as well as two special bonus games.

As mentioned earlier, Santa and Rudolf are considered wild symbols themselves. While Rudolf appears on the first reel in the main game, Santa lands on the fifth reel. As soon as one of the symbols appears, a free respin is triggered and the symbols move further to the left and right respectively. Respins occur whenever a wild symbol appears on the first or fifth reel. If it happens that Santa and Rudolf meet in the middle, this fight triggers ten free spins.

In the free spins round, you can play up to a maximum of 30 rounds of Santa vs Rudolf for free. Wilds can land anywhere during the free spins. If it happens again that Santa and Rudolf clash, four more free spins are triggered each time.

In the Santa vs Rudolf free spins round, you will notice the change in design. Santa becomes quite angry when he meets the reindeer, which is why the atmosphere also adapts to this encounter. Two special ads appear above the reels, which must be filled with Rudolf or Santa symbols accordingly. Every time a wild symbol leaves the reels, a space in the display is filled.

If you manage to fill one of the ads within the rounds in which you play Santa vs Rudolf for free, you will trigger another bonus following the free spins. There are either Rudolf Spins to be won, where three spins are credited for placing five wild symbols on the reels at a time, or the Santa’s Gilfts feature. In this bonus game, players can select gifts that include coin wins and multipliers.

In Christmas fever play online slot Santa vs Rudolf for free without registration.

Whether Christmas is just around the corner or not, Santa vs Rudolf will keep you in a cheerful mood all year round. This terrific slot offers an incredible amount of entertainment and with all the many bonus features also plenty of good chances to win. The lack of a scatter symbol is quickly made up for by numerous other features. Our German readers can now play Santa vs Rudolf for free without registration. We offer you this possibility directly on this page. Take the chance to get to know Santa vs Rudolf and enjoy free entertainment.

You can play Santa vs Rudolf as well as many other slot machines for free without registration. Discover lots of new creations or plunge right into a wonderfully merry Christmas fun with Santa vs Rudolf now!

How to play Santa vs Rudolf online at the casino for real money?

If you want to play Santa vs Rudolf online in the casino for real money, you should follow a few tips and tricks. It’s worth looking for an online casino licensed in Germany that offers a welcome bonus to new players. For example, look for free spins without a deposit to get a chance to play the first rounds of Santa vs Rudolf for free. The only thing that should be taken into consideration is the rules that state whether or not winnings that have been achieved can be kept. This way, the first real money winnings can roll into the account in no time.