Scrolls of Olympus by Stake Logic 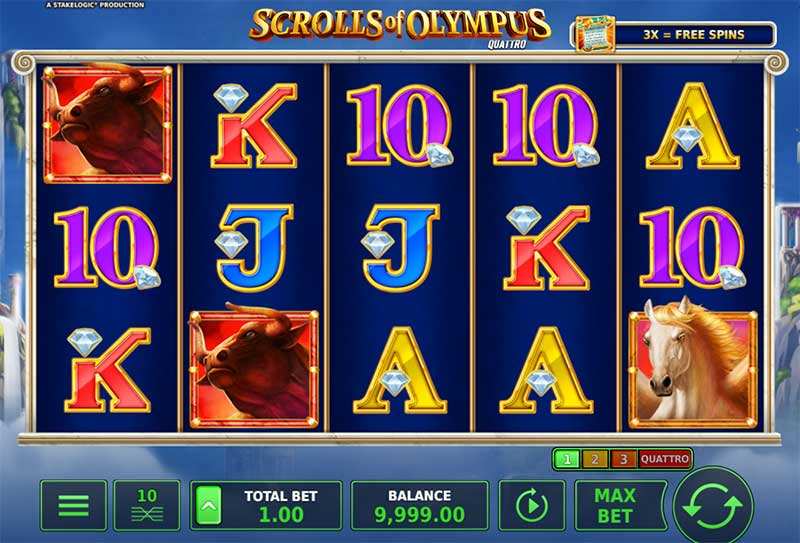 The mystical mountain of the gods – this slot game shows a new side of the Greek legends.

At first glance, Scrolls of Olympus is a slot machine like any other. The five typical reels welcome you and immediately the clear layout invites you to play. However, as soon as you learn that daredevils are playing Scrolls of Olympus while simultaneously using up to 20 reels, you will surely be amazed.

The player is immersed in this atmosphere

According to the legends, things were always wild for the Greek gods enthroned on Mount Olympus, which gives Scrolls of Olympus its name. The next step was never foreseeable and too often the gods showed themselves to be all too human in their feelings and actions. When playing Scrolls of Olympus for free, this circumstance is reflected, for example, by the low volatility, which means many winnings, but the amounts are usually smaller. All these circumstances are also reflected in the game’s atmosphere. Although you feel reminded of an analog slot machine by the music and the general classic structure, this game already shows the approaches that the developer team perfects in later games. With each game round you dive deeper into the Hellenistic mythological world.

This slot also relies on low- and high-paying symbols. The division of the main characters can be easily seen from the different designs. The characters, here represented by Zeus, the father of the gods, the Minotaur or Pegasus, show by their elaborate design that these are the main symbols that mean a bigger payout in case of a win.

A bonus for Scrolls of Olympus online: Learn the online game with the reels risk-free.

Scrolls of Olympus is equipped with a single special character. That sounds like a bit little at first, but as soon as you learn that this Walking Wild Scatter symbol combines the abilities of the conventional Wild symbol and the Scatters symbol, you know how powerful it is. The sign that announces the arrival of a special character to users who play Scrolls of Olympus for free is the namesake scroll. Its functions are the following:

Furthermore, two features are particularly interesting for players. The first of them is called “Quattro.” It gives the player the possibility to play with up to four tableaus at the same time. This means that the used reels are quadrupled. Accordingly, of course, your own bet will be adjusted. If you choose “Quattro”, you will of course increase your own chances of winning more. The second feature is used by the player voluntarily after a win. If you are willing to take a risk, you play for the winnings you have just made. If the color of a card is correct, the winnings are doubled; if the symbol is correct, even four times the original prize is paid out.

The special features summarized in the rulebook:

Scrolls of Olympus free to play without registration – A direct way against boredom.

Scrolls of Olympus online is not only an excellent game to fight the emerging boredom during long trips or weekends with bad weather, but also a great way to get familiar with the rules of common slot games. Users who play slots for free without registration are also better prepared should they decide to play for real money. If we draw a conclusion about Scrolls of Olympus by Stakelogic, we can see that it is a real early classic from the renowned game developer. For many years now, a certain gameplay strategy has been running through Stakelogic’s groundbreaking slots. Scrolls of Olympus online is no exception.

If you want to learn more about how Stakelogic constructs its games, what weighting is given to the reels, the winning combinations and the paylines, simply try out the individual games offered in all variants with us. There are no risks, annoying registration or long loading times. You can immediately start playing Scrolls of Olympus online. Playing with us is therefore a practical option for those who want something new and exciting. If you think you already know a game like Scrolls of Olympus inside and out, you simply switch to another one. It’s really easy as pie, and thanks to the interactive and responsive game design, the size of the game adapts to the screen of the terminal that users resort to in order to play Scrolls of Olympus for free without registration. This means that you can also enjoy the sophisticated slot games from Stakelogic on the go.

The slot machine also offers this: Play for real money in the online casino

Excitement and gaming fun are one side of the coin. Those who want to experience real thrills may want to try the real money variant at the casino in Germany. If you already have a strategy for playing Scrolls of Olympus for free and know which tips and tricks will lead to the desired results, you should take a moment to compare the providers. If you play smart, you will get a bonus. Free spins without deposit are a good example of this. By these free spins, we do not mean the free spins that come with a scatter symbol or as part of a feature in Scrolls of Olympus. Rather, these free spins mean that the provider takes over a certain number of betting rounds for you.

At the beginning, the differences between Scrolls of Olympus and the free game without registration are not as big as you might think. If players have previously gained their first experience playing Scrolls of Olympus for free, there is no stage fright when switching to the real money variant of the game from Stake Logic. All it takes is a quick comparison and you’ll know which casino offers the best opportunities for real winnings and maximum excitement with Scrolls of Olympus slot.