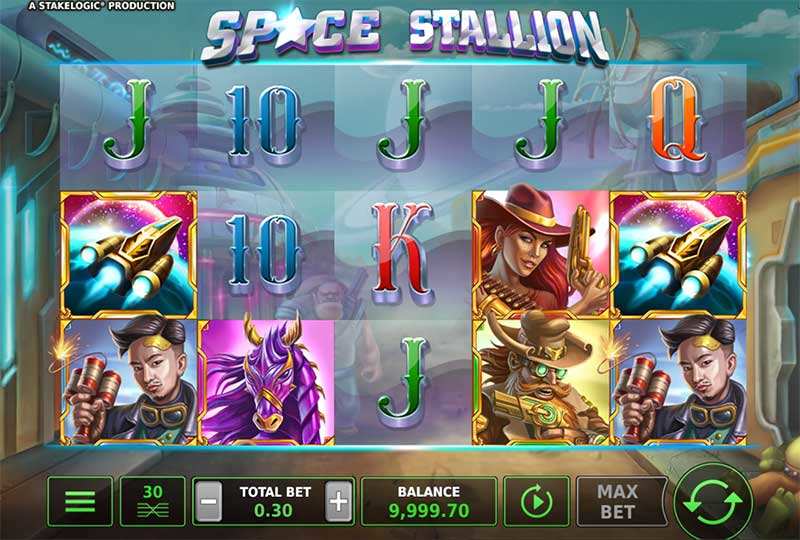 The Space Stallion machine from Stakelogic at a glance.

Do you want to dive into the middle of an exciting space adventure? Then the Space Stallion slot is just the thing for you. The space stallion, as the slot name translates, is the main symbol on the reels and together with brave space cowboys you defend a space station. It seems as if gold fever has broken out in space.

While playing Space Stallion for free, you will get a first overview of the slot game. Like most slot machines, Space Stallion is also equipped with five reels. 30 possible paylines give you the possibility of an incredible 30 chances to win per spin. For this to happen, at least three identical symbols must appear next to each other on the playing field.

Graphically, Stakelogic has done a great job. The machine convinces with a detailed design. On the reels, besides classic numbers and letters, you can see brave heroes and of course the space dude himself. The scene behind the playing field is animated and shows a kind of space station. Neon lights flicker, from time to time strange creatures ride by on onewheels or skateboards on the left side of the screen. Meanwhile, a kind of green gnome sleeps on the right side of the screen as a guard in front of a door.

The scene is accompanied by a galactic-sounding sound that doesn’t seem too intrusive. If you don’t like background music while playing Space Stallion, the sound can easily be turned off via the speaker button.

How to play Space Stallion by Stakelogic

Play Space Stallion for free without registration – this is the best way to get to know the slot machine. Better not look for an online casino where the slot is offered as a demo version – this m;gibility is offered here on our website. To start playing, all you have to do is click the spin button on the right below the game field. Alternatively, you can choose the Auto Spin function, where the reels will spin until you deactivate the function again.

You will also find other information such as the balance display, the total bet display, the paylines and an overview of the rules of Space Stallion online below the reel field. If necessary, you can turn on or off the online settings here, such as the Fast Spin for faster spinning of the reels, animations or the Gamble feature, among others. Take a look at all the features at your leisure while playing Space Stallion for free.

Space Stallion symbols at a glance

By playing Space Stallion for free, you will get to know the other characters and signs on the symbols besides the stallion. The lower symbols include the letters A, K, Q and J and the number 10. The numbers and letters are seen in a 3-D look on a milky translucent background.

Higher valued symbols in Space Stallion include two male and one female action figure and the star of the game, the mighty Space Stallion. The purple stallion as the main symbol will bring you the highest win with five matching symbols. As a special feature, the Space Stallion symbol appears as a 2×2 large jumbo character on the game board.

For you to get a payoff, the symbols must appear in consecutive rows from left to right on the reels.

In total, you will encounter various special characters during Space Stallion online games:

During the Free Spins, the 2×2 Wild Stallion symbol becomes a wandering Wild symbol that slides down one symbol per spin until it disappears. The Space Stallion free spins continue until the wandering wild symbols have galloped off the board.

In addition to the special characters, there is a gamble feature in Space Stallion slot. When you win, you have the option to use the amount in the Gamble Feature or collect the winning money. In the Gamble Feature game, you can choose to bet on a red or black character on the playing cards. This gives you a 50% chance of winning. All revealed colors appear in the game history. During the gamble game you will hear the sound of a galloping and neighing horse.

Conclusion: The space stallion provides a lot of gaming fun

Play the slot machine for free without registration – this is possible for players from Germany on our site. Here you have the opportunity to go hunting for profits with the space cowboys in the distant galaxy. In the demo version you do not need to worry about real money. Here, the pure fun of playing is in the foreground. And that is guaranteed not to come up short when playing Space Stallion. The good graphics, the wild and scatter symbols and last but not least the gambling option provide a lot of variety and thrills in this Stakelogic slot.

Space Stallion free to play without registration is, as we said, possible on our info platform. Try out the slot for free and without registration until you are confident in dealing with the rules and the gameplay. After that, you can also wager real money and keep your fingers crossed that the purple stallion appears as often as possible on the playing field of Space Stallion.

Once you think you’ve had enough of playing Space Stallion for free and have tested the slot extensively for free, there’s nothing to stop you from playing with real money. With an RTP of 96.11%, the minimum bet in the Space Stallion game is 30 cents, and the maximum bet is 60 euros.

See which casino appeals to you the most. Ideally, you will find a casino in German that offers a decent welcome bonus such as free spins without deposit or other bonus variants. After that, you wager the desired amount and the game in space begins.

Via the Loss Limit Amount you have the possibility to bet a maximum amount in case of loss. Once this is reached, the autoplay function is stopped to prevent a larger loss. This way you always have control over your bets even when playing with real money. Because even with good tips and tricks, there is no guaranteed strategy for a winning combination.