Stacks of Jacks by Gamomat 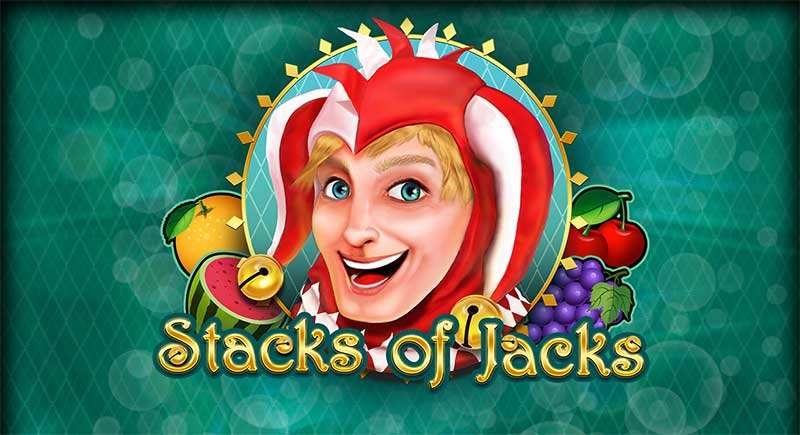 With the slot machine Stacks of Jacks, the developer and publisher Gamomat from Germany once again serves those casino players who like it classic and simple. Instead of several bonuses and extra features, you get pure slot fun in a traditional design. This applies both functionally and with regard to the graphics and sound effects. Typical arcade feeling is guaranteed here. Comparatively easy is also the structure of the game. There are five reels, three rows and just ten paylines. The only main character in the game is the wild symbol, which is also the wild symbol. As the title of the slot probably already reveals, the wild symbols in the game can appear stacked on multiple rows on the reels. Players do not have to worry about scatter symbols or other bonus symbols in the Stacks of Jacks slot. Instead, besides the jokers, there are only the following common and ever-popular standard motifs:

Finally, the joker as a stacking wild symbol in the game ensures that players can enjoy frequent winning combinations. Full paylines, i.e. wins that involve five symbols on all five reels, are not that rare. How the game can ultimately be played and what chances of winning it offers, we clarify in the following paragraphs.

Advantages & Disadvantages of Stacks of Jacks

Gamomat remains true to itself, in terms of the user interface, also 2020 further. Casino players who already have gaming experience with the games of this studio should therefore find their way around right away. New players of online slots should also hardly have any problems with the intuitive operation of Stacks of Jacks. For example, the “spin” button is hard to miss and also makes itself noticeable by blinking. A click on the button starts a new game round. Of course, the game also offers an autoplay function, which automatically starts new game rounds. However, this turns out to be quite simple and does not offer any options to set various bet and win limits or similar rules. Which is a bit of a shame for a slot from 2020. However, the lack of various setting options for the autoplay function is not a big drawback.

All game rounds always take place automatically on all ten paylines. Accordingly, these cannot be set freely. For one or more winning combinations, at least three identical reel motifs are required. These must be located from left to right on the reels on one of the ten paylines. The winnings of a combination then only depend on the motif, the number of symbols and, of course, the amount of the bet. The player can set his bet before each start of a new round by a few clicks on the plus and minus symbols of the main interface. Optionally, there is also a “Max Bet” button available, which immediately raises the bet to the maximum amount with one click. All information and rules of the game and a detailed winnings table can be accessed by the player by clicking on the blue “Winnings Schedule” button. In the upper area of the game there are various setting options, for example for the sound, turbo spins and a full screen mode.

The linchpin of Stacks of Jacks is the Joker as a stacking wild symbol. The chances of winning the games therefore depend mainly on how often and in which position the joker shows up. Stacking means that the wild symbol usually, but not always, appears blocked on one reel. It occupies two or even all three rows of a reel. This naturally leads to the fact that interesting winning combinations can often be formed on several paylines at the same time. So-called “Five of a Kind” combinations are also not uncommon. If you want to convince yourself of this, you should play the demo of Stacks of Jacks for free and test the slot without any risk. All in all, the stacked and blocked wilds offer great winning potential and provide excitement while playing.

Apart from that, Stacks of Jacks online has not been given any additional features or bonus games. If you are hoping for free spins or other bonuses and like to have a strategy when playing slots, you are rather wrong here. On the other hand, if you like classic slots without a lot of fuss and frills, Stacks of Jacks is the right choice for you.

With Stacks of Jacks, Gamomat has certainly not achieved a tour de force in terms of innovation. On the contrary, the slot game offers practically no innovations and surprises. Fruit slots are old hat. Jokers as the most important character as well. And with stacking wild symbols, a developer today also no longer wins any innovation prizes. But that’s exactly what makes the game so appealing. Stacks of Jacks is all about solid, solid and traditional slot game fun. Exactly such slots are still needed. After all, there are now more than enough video slots, which often have far too many and thus unnecessary functions.

Play Stacks of Jacks for free

Despite the simple game principle, it can be quite worthwhile to play Stacks of Jacks for free. This is even more true if you are a complete novice when it comes to slot games and video slots. At most online casinos, trying out the test version of the game is possible without a customer account. Therefore, Stacks of Jacks can be played for free and without registration and thus tested. Although the fun of playing for play money is of course rather limited, especially in view of the game’s limited range of functions. Nevertheless, it can prove to be helpful to play Stacks of Jacks for free and try it out before playing for real money. After all, the demo game brings the following advantages:

As you can see, there are some good arguments for playing a slot machine for free and without registration.

Play Stacks of Jacks: Chances of winning and playing for real money

While it may be quite fun to play a few rounds of Stacks of Jacks for free. However, the thrill and joy of the game only comes when you play for real money. Stacks of Jacks online offers rather manageable chances of winning, especially in direct comparison to other slot machines. Players can win up to 200 times their stake in a single round, while other games offer 10,000 times or more. However, playing Stacks of Jacks also involves less risk, as it is a slot game with low volatility. This means that the game does not pay out excessively large winnings, but it does trigger winning combinations more frequently.

As a result, the player’s balance is not subject to too much fluctuation, which ultimately minimizes the risk of using up the entire balance in just a few rounds of play. In addition, there is a good RTP value of just over 96 percent. With the RTP (Return to Player), developers and casinos indicate the average and thus theoretically possible payout rate of their games. In principle, every player can play Stacks of Jacks for free and even check this information for themselves purely theoretically.

Casino players who want to play for real money should last but not least take some tips and tricks to heart. This is especially true with regard to the many great bonus offers. Almost all casinos regularly put together new and interesting bonus packages, which are mainly aimed at new customers. These can include free spins without deposit, bonus credits or even some free starting credit to use for free.

Odds of winning the Stacks of Jacks slot at a glance: