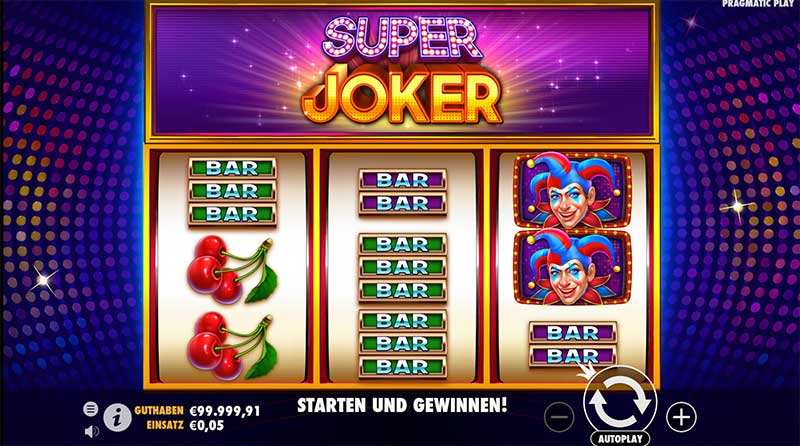 Super Joker by Pragmatic Play is a particularly entertaining slot game. However, it’s not easy to categorize it, because although its motifs are rather reminiscent of a slot machine of the first hour, as they are often found in German arcades, the slot makes you feel like you’re in a TV studio. When playing Super Joker, there are sparkles all over the place. Those who find this rather irritating can get used to the colorful world of the game by first resorting to the possibility of playing Super Joker for free without registration.

In the online casino, Super Joker has many familiar and typical features for slot machines, which on the one hand makes it easier to find your way around and on the other hand allows you to use a strategy that may already be tried and tested. For example, Super Joker Slot has rows and reels, paylines, a wild symbol and a bonus feature, but there are no free spins. We did not miss these at any point in our test, because Pragmatic Play has of course come up with a bonus feature that is at least as exciting. What kind of bonus feature it is, how it is triggered and what ultimately makes Super Joker online the special slot that it is, you will learn from us.

Super Joker at a glance

When you start playing Super Joker for free, you will be greeted by a sparkling and colorful screen, in the middle of which is the large playing field consisting of three reels with three rows. When playing Super Joker, the glittering dots placed in the background in a semicircle shape, which have been dipped in a blue and reddish hue, immediately catch the eye. The animations, which are popular among players in Germany, are played in several ways. For example, Pragmatic Play has discreetly placed a fully animated Super Joker lettering directly above the reels, but this did not distract us too much in our test when we were able to play Super Joker for free. More animations come out in this online casino fun during the bonus features, for example, when the wild symbol lands.

One of our tips is to play Super Joker online with sound effects. Because these are really extraordinary and contribute to a considerable extent to the entertainment value that this slot game undoubtedly conveys from the very first spin. Thus, not only when you play Super Joker for free without registration, but also when you play with real money, you will encounter a fast-paced background music, which is complemented by thrilling slot sounds and becomes even more intense during the bonus features. But also the chances of landing a particularly big win are high during the bonus rounds, because here multipliers can make sure that you become a dancing joker even in your living room.

The wild symbol in most slots is a joker that substitutes for all other symbols, except for the scatter symbol that triggers the free spins. In Super Joker, the joker is the wild symbol and since there is no scatter symbol, it even substitutes for all other symbols. In addition, it can land on all three reels and also on all three rows.

Without having to use any tricks, you can get a free re-spin at Super Joker online. But not just a one-time re-spin, but a re-spin that is repeated until a winning combination lands. Should you trigger this feature, then a win is indeed guaranteed. We were able to verify this in our test while taking the opportunity to play Super Joker for free. The whole thing works like this, if two reels land fully occupied with the same symbol, then the free re-spin is set in motion on the third reel, while the other two reels are excluded from the spin.

The Double Wheel of Fortune

The double wheel of fortune can bring you an incredible win, in order to make a spin on the first wheel of fortune, the same symbol must land on all positions of all reels and rows. So, the entire playing field must be populated with the same motif, although the wild symbol can of course substitute for this symbol as well. Now your first spin starts on the lower wheel of fortune, this is occupied with multiplier values from x2 to x5 as well as a special motif, should this land, then a second spin takes place, this time on the upper wheel of fortune. Even higher multipliers of x7 up to x20 can land here!

How to play the Super Joker Slot

The first spins should always be made on a new slot machine for free and without registration, this way you can get to know the rules and try out the slot. Of course, you can also play Super Joker for free and make your own first experiences right away. Among other things, you will find out that Super Joker only has five easy-to-remember paylines. On these, the winning combinations consisting of at least three identical motifs must land from left to right and you will already receive a prize corresponding to your stake and the respective winning combination.

Since Super Joker, including the wild symbol, is played with only nine symbols, there are no real main symbols in the true sense of the word, only according to the valence you might be able to identify main symbols. The nine symbols of the slot consist of:

Pragmatic Play has created a slot with Super Joker that delivers pure gaming joy with every single spin, and mind you, without any free spins among the bonus features. Instead, the software maker has come up with something new and particularly exciting with a double wheel of fortune full of multipliers, which made us scream with joy a few times in our test. On top of all the action on the reels, there is a very well-chosen background music and appealing graphics. Therefore, you should play the slot for free without registration. With the demo version on our website, you can try out the slot game for yourself today without any obligation.

How about trying your luck with real money on the multiplier wheel of fortune? Signing up at an online casino will only cost you a few seconds of your valuable time and on top of that, you will be rewarded with a great welcome bonus, such as free spins without deposit or a deposit bonus.