Tails of New York by Saucify 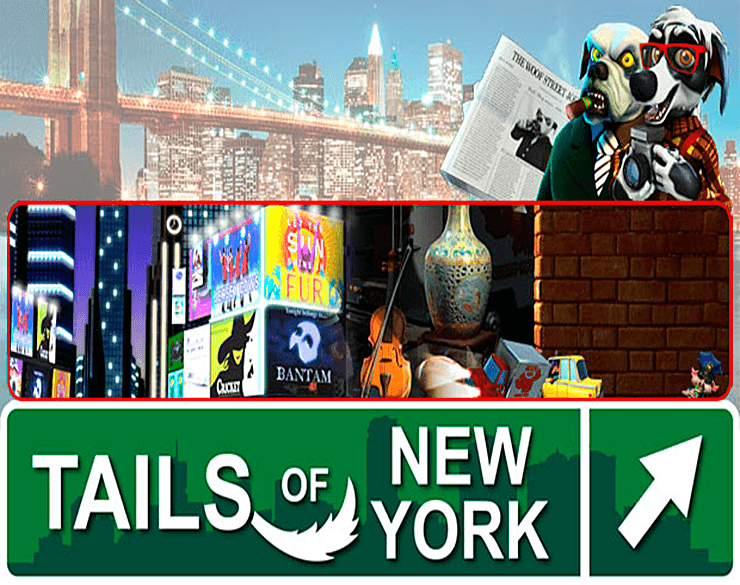 This animal-themed 5 reel slot from Saucify transports the player to the city of the Big Apple and all those inhabitants of the city that can boast a tail. So there is a dog, a cat, a fox and much more. An interesting and somewhat unusual idea with an implementation reminiscent of a cartoon or an animated movie. The slot is obviously set in a New York street with traffic lights on both sides of the reels. This game is similar to the Tomahawk slot machine.

However, there is more than animals to be seen in this city. Among them, a newspaper, a coffee to-go, one of New York’s typical cabs, a pizza and a camera. The street sounds in the background, accompanied by jaunty piano music perfectly fit the theme.

The functions of the slot

The symbols of the slot can be divided into two categories. In the first category, wins await from as little as 2 symbols, and that is when either Buddy (the somewhat scruffy black and white dog), Gordan (the cigar smoking bulldog) or Chow (the pipe smoking cat) appear. If more than 2 of these symbols appear, big wins await – 5 of the same symbols on a payline pays 7000x (Buddy), 2000x (Gordon) or 1500x (Chow).

The Pack Leader of New York

Although a bit scruffy, Buddy is the leader of New York’s animalistic gang. Not only does he result in the highest payouts, but he has other abilities as well. For example, he can stand as a wild symbol for all symbols (except for single symbols). Moreover, all winnings resulting from Buddy’s presence are doubled. But that’s not all! Buddy is also a photographer. During the game, he randomly appears on the right side of the slots to take a picture with his camera. This turns one of the game’s symbols into a wild symbol and even more wins occur.

The lone fighters of New York

Besides the pack leader, in an animal commune there are also those who like to stand for themselves. In this slot, there are two of them: the cab driving fox and the cat Chow. The former brings the player free spins when 3 or more symbols show up, the latter activates the “Chows Run” feature when 3 of the symbols show up.

Obviously, Chow has been able to grab quite a few things in New York and stashed them in her van. When this feature is activated, Chow begins unloading her loot, including vases, jewelry and paintings, from the van. In doing so, the player can make a selection of these treasures, which will bring associated winnings.

The limits of New York

There are also limits to the winnings and stakes in New York. Thus, a maximum of 40 paylines can be played. Up to 10 coins can be wagered per line, with the value of the coins ranging from 0.1 to 0.25. The limits are thus a minimum bet of 0.01 and a maximum bet of 100 per spin. Der Jackpot von 70000 Münzen ist  nicht einfach zu erhalten, aber dennoch möglich.

One of the best slots from Saucify, with innovative features and coherent implementation of the theme. With graphics reminiscent of animated movies and background music that authentically reflects the streets of New York, this slot is a gaming delight for everyone. The exciting and lucrative special features of the slot are guaranteed to keep you entertained. And just like in the real New York, most of those who have been here once will probably come back again and again. A truly successful slot.

Welcome to the Big Apple!

Go on various adventures in the big city and collect big winnings on the way. Even if you don’t have a map of New York with you, you will quickly find your way in this game. You can test the slot like the Sizzling Hot slot machine online and without any risk. And of course you can play the slot like the Lucky Lady Charm slot games for free!