The Final Frontier by Merkur 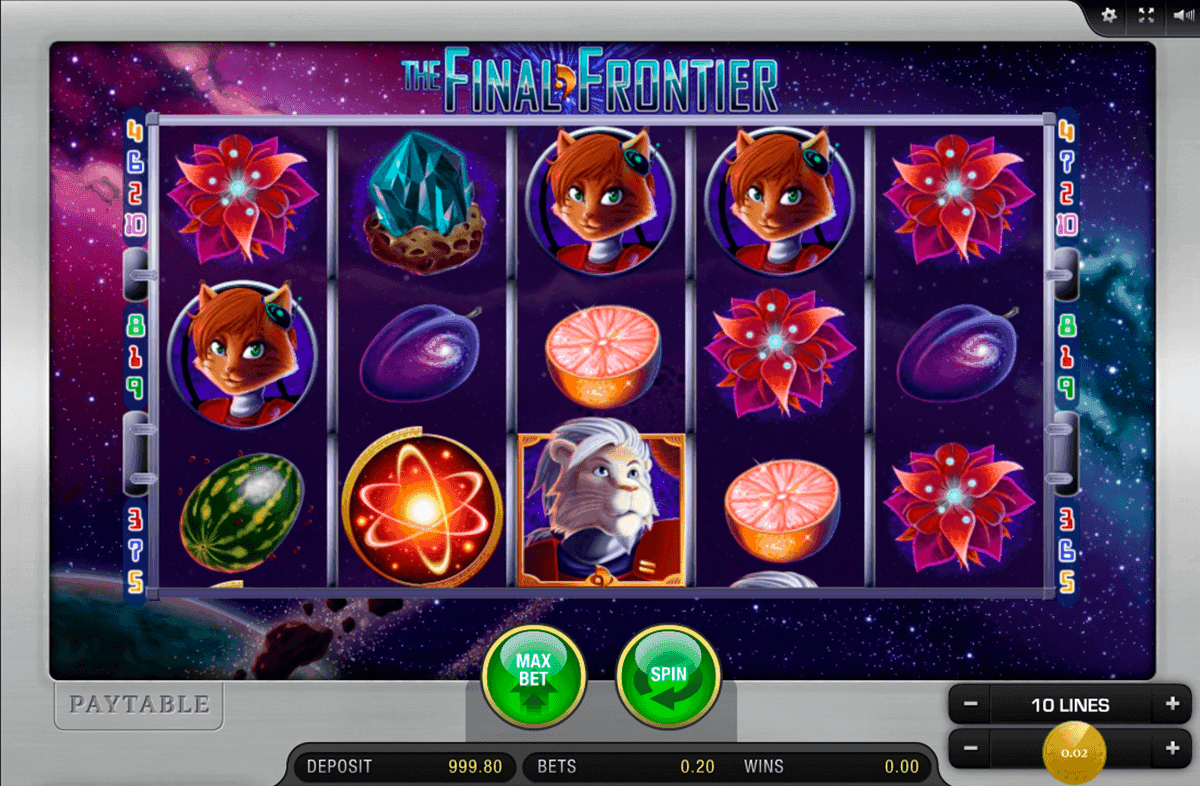 Fruits and animal people in outer space? What sounds like a utopian fantasy from a trash movie is a hip Merkur slot game. The Final Frontier slot game is about a wild chase for the profits in outer space. The game offers beautifully designed graphics, special features and exciting gameplay. Those who love sci-fi will also enjoy Final Frontier. You can play The Final Frontier online for free without registration, or you can use real money to hunt for the protons and crystals that stand for winnings in the higher range. All you have to do is visit the online casino website and you’re ready to go.

When playing, the gamer has the choice. What strategy should he follow, how many paylines to choose and how high should the stake be? This means quite a bit of excitement in space with The Final Frontier from Merkur. But after a short familiarization phase, the galactic game convinces with its spacey atmosphere and the matching sound. And the possibility to play The Final Frontier for free before it gets down to business calms the nerves. But what would a slot be without that certain suspense factor?

The rules of the slot

The Final Frontier gives players quite a few options to play the game. There are no fixed paylines here and the bets can be freely chosen for each spin anyway. On the other hand, it doesn’t exactly make the decision easy when there is such a wide selection of paylines. Therefore, the winning combinations are correspondingly high. In The Final Frontier online, you can choose between one, three, five, seven or even ten paylines. The stakes in real money mode are also variable. Here you can choose from 1 cent to 1 euro per spin and payline. However, the higher the respective stake is, the higher the possible winnings will be, of course. That’s just a tip by the way.

In total, the slot game from Merkur has 5 reels, which are responsible for the player’s luck. In addition, the game “The Final Frontier” also offers an autoplay function, which is very convenient especially if the player always wants to play the same stakes and paylines. The lion serves as the wild symbol as well as the main symbol in the game, while the proton acts as the scatter symbol. The lion replaces missing symbols of a line here, but not the scatter, i.e. the proton.

Bonus at The Final Frontier

Free spins are exactly what slot players are always most excited about. There can be quite a few of them with a bit of luck in the Merkur game. In order for a spin to bring a win, it is necessary, as in most slot machines and also here, to form at least three identical characters on a payline. For example, if the wild symbol appears in the form of the lion, two of these are already enough to win.

For it to rain free spins, at least three protons must appear on the reels after a spin. If that is the case, the player can look forward to 10 free spins. Moreover, even in the free spins, additional free spins can be earned in addition to the winnings. For every proton that appears, there are another 5 free spins. A multiplier also doubles the winnings achieved.

The Final Frontier is a quaint space adventure where players go on the hunt for the crystals and protons. A nicely detailed implementation is also part of the game here, as well as the many combinations with which the player can achieve good profits. Due to the freedom that the player can also set the paylines himself, this results in a thoroughly relaxed gameplay. In the online casino, you can simply play The Final Frontier for free without registration.