Turn It Up by Push Gaming 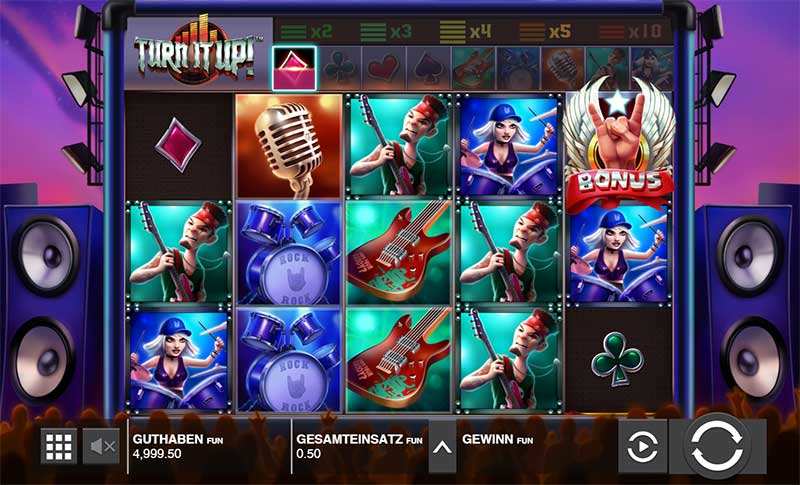 Turn It Up online slot machine

Be careful, Turn It Up by Push Gaming is going to be loud, very loud in fact! While playing this slot, you might even think you’re at a rock concert, and the online casino fades into oblivion. The crowd is boiling and everything is staring spellbound at the stands where the reels of the slot game are located. One thing we can tell you already, the band is really hot to perform in Germany and will rock the stage with this game. By the way, Push Gaming has not assigned you a place far in the back. They are actually in the middle of the crowd!

Everything is really different in Turn It Up, well at least almost everything, because of course you can play Turn It Up for free without registration, as is always the case with Push Gaming games. When you play Turn It Up, you win even if a spin doesn’t end in a win. You don’t even have to use any tricks for this. This sounds too good to be true? But it isn’t, read on to find out how a non-winning spin in Turn It Up Online affects you.

The Turn It Up slot at a glance

Turn It Up is completely under the sign of rock music. Of course, this is also noticeable in the sound effects. Push Gaming has put together a mix of not too sharp rock music and the popular slot sounds, creating a perfect soundscape for this online slot game. The visual appearance has of course also been tailored to the theme of Turn It Up, just as we are used to from this game manufacturer. Here we have a tip for you, open the slot by playing Turn It Up for free and pay attention to the dancing concertgoers and the motifs of the main characters. We don’t promise you too much when we say that you will be amazed by the graphics of Turn It Up online.

Another trademark of the British casino experts are particularly unusual bonus features. The fact that this also applies to Turn It Up will also be immediately apparent to you when you play Turn It Up for free. For example, there are not too many slot machines that can claim that a non-winning spin still gives players an advantage. Fortunately, you don’t necessarily have to throw your strategy out the window, especially if it is based on free spins. These are as much a part of playing Turn It Up as the sand is to the sea.

Of course, we can understand if you can hardly stand the excitement and want to start playing Turn It Up for free without registration right away. Be patient for a moment, because now we come to the bonus features.

This bonus feature makes the Turn It Up slot an absolute blast! It actually consists of three parts and which of these three is activated is decided by the random principle. The more often a spin doesn’t produce a winning combination, the better the bonus applied will be. Of course, you will always stay in the picture about which bonus is being upgraded, and not only when you play Turn It Up for free. Just pay attention to the indicators above your reels and be happy if a spin doesn’t bring a win.

The spin upgrade with wild symbols.

In this feature, randomly selects any motif and should two consecutive spins fail to land a win, then that motif is converted to wild symbols.

The spin upgrade with removed symbols

Also in this version of the spin upgrade, two losing spins are required before a randomly selected symbol is completely removed from your reels.

The Spin Upgrade with a Multiplier

How about a free multiplier as a reward for surviving a dry spell? Should the multiplier be selected, then five different levels between x2 and x10 can give your next win a juicy boost.

This bonus can be awarded in the base game when a win is achieved. Several spin upgrades are selected and are applied to the next spin.

How to play Turn It Up online

As soon as you play Turn It Up for free, you will notice that you are also dealing with familiar principles in terms of gameplay and rules. For example, the slot game has five reels with three rows. Ten paylines run across this playing field, which cannot be configured. You should not forget that the winning combinations of all symbols consist of at least three identical motifs and they must land on a winning line from left to right. Turn It Up is played with these twelve motifs:

Conclusion and play Turn It Up for free

With this slot machine, even seasoned rock stars would get their money’s worth. A perfect soundtrack is impressively supported by animations to highlight the theme. In addition, there are bonus features that can produce amazingly high wins even in the base game. Outstanding, of course, is the concept of spin boosting through non-winning spins. This feature not only creates a unique entertainment effect, but also increases the chances of winning and even the amount of the winning sum can get a massive boost.

With us, the rock concert is already happening today, because you can play the slot for free with us without registration!

Play Turn It Up with real money

You feel ready to play Turn It Up with real money? Then it’s best to sign up at an online casino right away. Your personal welcome bonus, which can even consist of free spins without a deposit, is already waiting for you.

Turn It Up slot details