Valkyries of Odin by Stake Logic 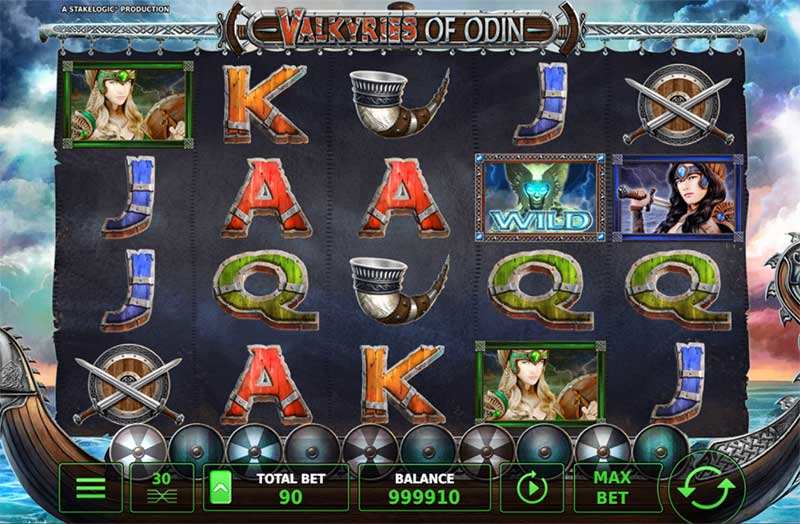 Valkyries Of Odin is a slot from Stakelogic. It is set against the backdrop of Norse mythology. Odin was the father of the gods in the time of the Vikings. However, you could call Valkyries Of Odin a game that is all about fantasy. It is played with five reels and four rows in a convincing 3D graphics.

If you play Valkyries Of Odin for free without registration with us, you will be able to see that there is even the possibility to activate a 360° view. Valkyries Of Odin by Stakelogic is a modern and impressive game with Free Spins, a Wild symbol, special features and 30 paylines that read not only from left to right in the Beast Battle feature, but also in the opposite direction. However, there is no scatter symbol, but the game has a bonus symbol.

This slot game lives from its atmosphere. And it impresses with the possibility to win real money without a special strategy. The chances are over 30 paylines.

As mentioned, Valkyries Of Odin offers five reels and four rows. The principle of this game is not different from that of many others from Stakelogic. Basically, whether playing for free or with real money, you have to hope for the right symbols. And a bonus means that there are additional chances to win. The actual rules are as usual in Valkyries Of Odin.

This slot machine offers 3D graphics. This is an argument to play Valkyries Of Odin for free. A clear sound is heard with rhythm and fanfare. It could be turned off, of course, if you feel disturbed or distracted by it. Graphically, you are on a Viking boat and in the background, Valkyries Of Odin has lightning shooting out of a cloud-covered sky.

How to play Valkyries Of Odin

The symbols of Valkyries Of Odin

When a symbol with scary eyes and the word Wild appears, it can substitute for all other symbols except the Logo symbol and the Bonus. Five wild symbols bring 4000 at the highest possible bet.

Bonus is another keyword. Next to the word you will see the head of a dragon. Three to five symbols mean you get 10, 20 or 30 free spins with 2-way win lines. What is meant is that wins are read in two directions.

Ten times appearance of the Valkyries Of Odin logo symbol means that a special Valkyries Of Odin feature appears. Giant Mecha Valkyrie symbols can then appear on reels two, three as well as four and bring high wins in conjunction with other symbols. What kind of winning combinations are possible, we have already shown for you.

While you have all the freedom when playing Valkyries Of Odin for free in terms of play money (also for this reason it is called without registration), when playing in an online casino it is of course about the amount of the bet. The more you bet, the more you can win. From 0.01 euros to 0.50 euros is a possibility. The bet per line varies from 1 to 8. 120€ is the highest possible amount.

Even while playing Valkyries Of Odin for free, you can see the ways in which you can win additional winnings. However, luck is a part of it. So, there is no trick to make the image with the keyword Bonus appear three times or more on the reels from Valkyries Of Odin slot. If it appears multiple times, you will spin at least 10 free spins and in the highest case 30 free spins. With these, winnings can be achieved. And unlike a bonus provided by a casino, there are no other conditions to be met. Also, the aforementioned mecha feature cannot be specifically challenged. If it is activated by the Valkyries Of Odin logo appearing ten times, a big win is likely.

A basic tip is to familiarize yourself with the gameplay when playing the Valkyries Of Odin slot. It is ultimately about setting the paylines and what the symbols mean. Play a few rounds of Valkyries Of Odin online without risk and then you can move on to a casino.

Conclusion: It is worth to play Valkyries Of Odin online for free.

Valkyries Of Odin with real money

To play Valkyries Of Odin with real money, you need a casino that cooperates with Stakelogic in terms of software. You sign up and can benefit from an attractive bonus. Maybe there are even free spins without a deposit. This is possible and allowed in Germany. German customers are very fond of such an offer, because they can explore everything without any risk. If then Valkyries Of Odin can be played online, another reason to register is given. By the way, this game is mostly available in German.