Vikings Vs Trolls by Pragmatic Play 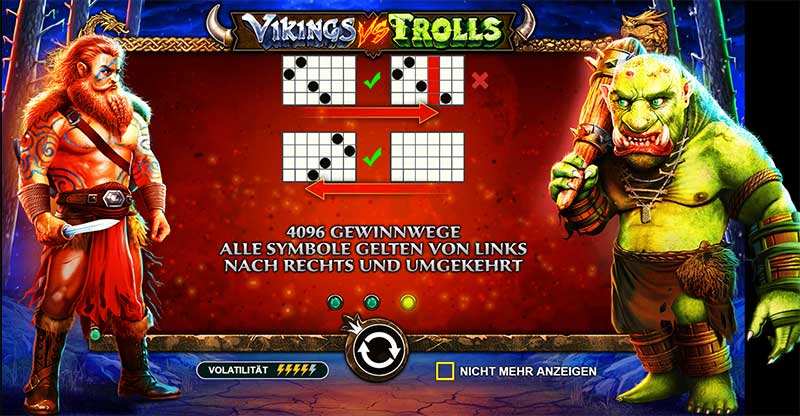 Vikings vs Trolls by Pragmatic Play

There are so many trolls on the internet, unbelievable! Time for a clean-up action, don’t you think? We’ve already started it once and killed some trolls the good old Viking way. How did we learn to do that? Pragmatic Play was our mentor! In fact, we were trained in it while playing Vikings vs Trolls for free without registration. It was a fun experience that we now indulge in more often! We could also use some reinforcements. Where are all the brave women and men from Germany and neighboring countries who help us with Vikings vs Trolls online?

You can safely leave the real money at home, because the troll hunt at Vikings vs Trolls slot is free of charge. Learn here now first of all our tips and tricks, learn the rules and then march off, without registration in a suitable online casino!

Our experiences and impressions with Vikings vs Trolls Slot

We hope you are not a troll, because then we would have to apologize at this point. Maybe we are still in troll hunting fever, or maybe bonus and free spins have gone to our heads. We have now made no secret of what we think of trolls and that we just gave them a good spanking at Vikings vs Trolls online. We assume that there are no trolls among our German readers who might now feel offended or even threatened. However, if this is the case and you are a troll, then you are certainly a very nice, sympathetic and attractive specimen. Just take a look at Vikings vs Trolls by Pragmatic Play and you will see the difference. These trolls are really a different caliber. We had to hit them with the club several times most of the time, because they have hard heads and cling tenaciously to the reels. Playing Vikings vs Trolls for free, only real Vikings can do that – and us and you!

Vikings vs Trolls online is the ultimate test of courage

How to play Vikings vs Trolls online without registration

The first feature we took note of in Vikings vs Trolls was the autoplay feature. This offers a wide range of options for automatic game rounds, and not just when you play Vikings vs Trolls for free, with this being a great opportunity to develop your autoplay strategy. You’ll certainly immediately notice the larger game board behind Vikings vs Trolls online, which has room for a total of 24 winning symbols. In fact, there are six reels here, each of which is divided into four rows. Moreover, you can play with 4096 paylines, which are not only valid from left to right, but also the other way around. Thus, you will get a huge amount of winning combinations. Keep in mind the context: the average slot machine has between ten and twenty paylines.

The Vikings vs Trolls main characters

In Vikings vs Trolls, there are many unique main characters that might confuse you at first glance. We’ll make it easy for you and sort them here in ascending order of their monetary value.

The special winning symbols and bonus rounds in Vikings vs Trolls.

There are still some special features in Vikings vs Trolls that you can get to know for free. For example, there is a wild symbol that acts like a wild card, so to speak. The red-gold wild appears exclusively on reels 2, 3, 4 and 5 in Vikings vs Trolls, completing winning opportunities. The other bonus symbol is the scatter symbol, which traditionally gives away free spins. It appears as a precious metal Viking shield and awards you fifteen free spins if it appears ten times. However, you can get over twenty such symbols at once, allowing you to play up to 250 free spins. By the way, after each win, the amount won is further multiplied by a x2, x3 or x5 multiplier. You can find more scatter symbols during Vikings vs Trolls free spins, which can further extend your free spins.

Our verdict: Vikings vs Trolls is epic and exciting even for free.

Our recommendation is: if you want to try a new fighting strategy in the game, why not try playing slots for free without registration. The advantage here is that Vikings vs Trolls are still fighting, but no real human lives are in danger. So if a green-skinned guy comes running, you can just throw a determined “troll you” in his face and resolve the conflict without endangering anyone or your wallet. We love Vikings vs Trolls free to play game with all our hearts!

Playing Vikings vs Trolls for real money lets you prove your true strength in battle.

Do you choose the side of the Vikings or that of the Trolls? Feel free to side with the trolls as well. After all, we have nothing at all against fringe groups and are open-minded and tolerant even in the world of Vikings vs Trolls! However, when you play Vikings vs Trolls now, you should also choose the right casino. A proper bonus is important, a load of no deposit free spins can really get the party rolling. The risk involved in a real money battlefield brawl is usually very difficult to implement, but here the swinging of the club is fun anyway.