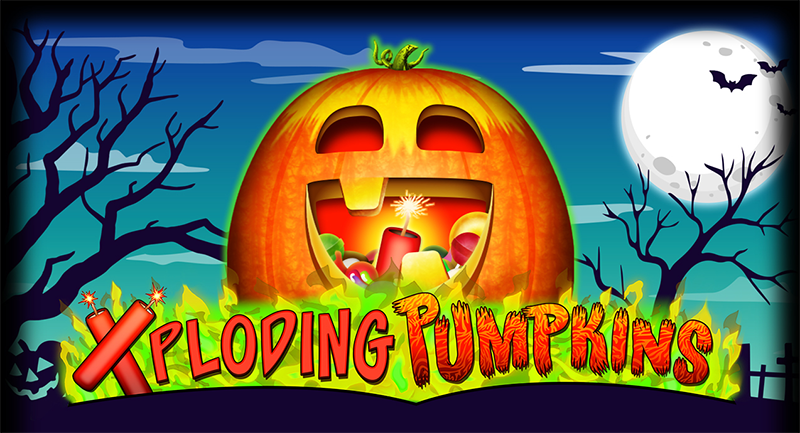 Halloween may only come once a year, but some people can’t get enough of the atmosphere and special features of this holiday that originated in the USA. A widely known feature of this spooky party, which is a mixture of Christian and Celtic customs, the hollowed pumpkin, which is given a face by carvings. Its name: Jack O’Lantern. The slot manufacturer Gamomat has taken this pumpkin as a model for the slot game Xploding Pumpkins. And one thing in advance: The slot machine is not only suitable for playing on the eve of All Saints’ Day, but is also a lot of fun outside of Halloween.

It is a classic 5 reel slot with a total of 10 paylines. While there are no free spins, there is the pumpkin, which explodes after appearing and leaves up to 9 wild symbols on the playfield. This special feature then also brings the most points in the Xploding Pumpkins slot. We have taken a closer look at the game rules and explain how exactly the slot works. We also show where you can play Xploding Pumpkins for free without registration.

How to play Xploding Pumpkins online

The rules for paying out winnings follow the classic scheme, as we already know from other slots from Gamomat, Novoline or Merkur. The aim is to get as many identical symbols as possible next to each other on the reels along the paylines. The first reel is the starting point of the count. According to the stake and the number and type of symbols, the winnings are then paid out.

The symbols and multipliers

In order to make the atmosphere as dense as possible, Gamomat has dispensed with symbols such as numbers or playing cards in Xploding Pumpkins, instead relying primarily on fruits here. Besides cherries, lemons, oranges, plums and grapes, the melon also appears. The design of the watermelon is in line with the theme of the slot: the half-sliced melon contains a bare bone in the blood-red flesh. The highest paying symbol is the “7”, which is badly injured and bleeding with white bandages makeshift. The symbols and their multipliers are:

The pumpkin itself has no multiplier, as it explodes right after it appears anyway.

A scatter symbol does not exist in Xploding Pumpkins, as there is no free spins feature that could be triggered with such a main symbol. But that doesn’t matter, because the game principle is designed in such a way that it works great even without free spins and brings high winnings. The best way to test this for yourself is to play Xploding Pumpkins for free.

The bonus features at Xploding Pumpkins

In Xploding Pumpkins from Gamomat, the pumpkin itself is the special feature. If the grinning vegetable appears on a reel in any position, it explodes. After that, there is a Wild symbol on all adjacent spaces as well as on the space where the pumpkin originally appeared. Thus, up to 9 wild symbols can be obtained with one spin. Thus, rows of 5 are not uncommon and the winnings inevitably shoot up. After all, not only one winning line is counted, but all of them.

In addition, as with almost all games from Gamomat, there is also the Gamble Feature in Xploding Pumpkins. This means that all winnings can be played for again. This is done either with the risk ladder or the card game, where you have to choose the right color (red or black) before the next card is revealed. But be careful: if you guess wrong, you lose the entire stake at once.

Stake and ways to win

Xploding Pumpkin is a game where very high stakes are not possible. The player sets his bet per payline before the spin. It starts at €0.01 and the highest level ends at €0.60. Thus, the minimum bet is 0,10€ and the maximum bet is 6€. However, due to the exploding wild symbol, it can happen that the entire screen is filled with the same symbol. This means: 10 times the maximum win per winning line, which in the case of the “7” would mean the highest win.

Tips and Tricks for Xploding Pumpkins

Since this slot, like any other, is purely a game of chance, there are no tips and tricks that could be used to outsmart the slot machine. Nevertheless, the gambling function should not be used too intensively. It is especially useful when the expected win is equal to or below the bet. However, we do not recommend using the gambling function for higher winnings.

Gamomat has done a lot right with Xploding Pumpkins. The Halloween atmosphere comes across well, which is on the one hand due to the pretty and at the same time creepy design of the symbols, and on the other hand due to the eerie sound effects. Although Gamomat uses the same sound for the spinning of the reels as in the other slots, there are all kinds of spooky sounds in the background. The idea with the exploding pumpkins is basically not new, but it brings rewarding winning combinations.

Of course, it is much more fun to play a slot for real money. At our site you will find a wide selection of reputable online casinos where you can play Xploding Pumpkins. We also have some providers in the list that offer a no deposit casino bonus, which means you can play Xploding Pumpkins for free. The great thing about this is that there is still a way to rake in a profit – and without having deposited a penny. But casinos with other forms of a welcome bonus are also represented, so you can only win as a new customer. So check back with us regularly to stay up to date with the latest slots and bonuses.